THE FATE OF PATHS: Kailin Richardson 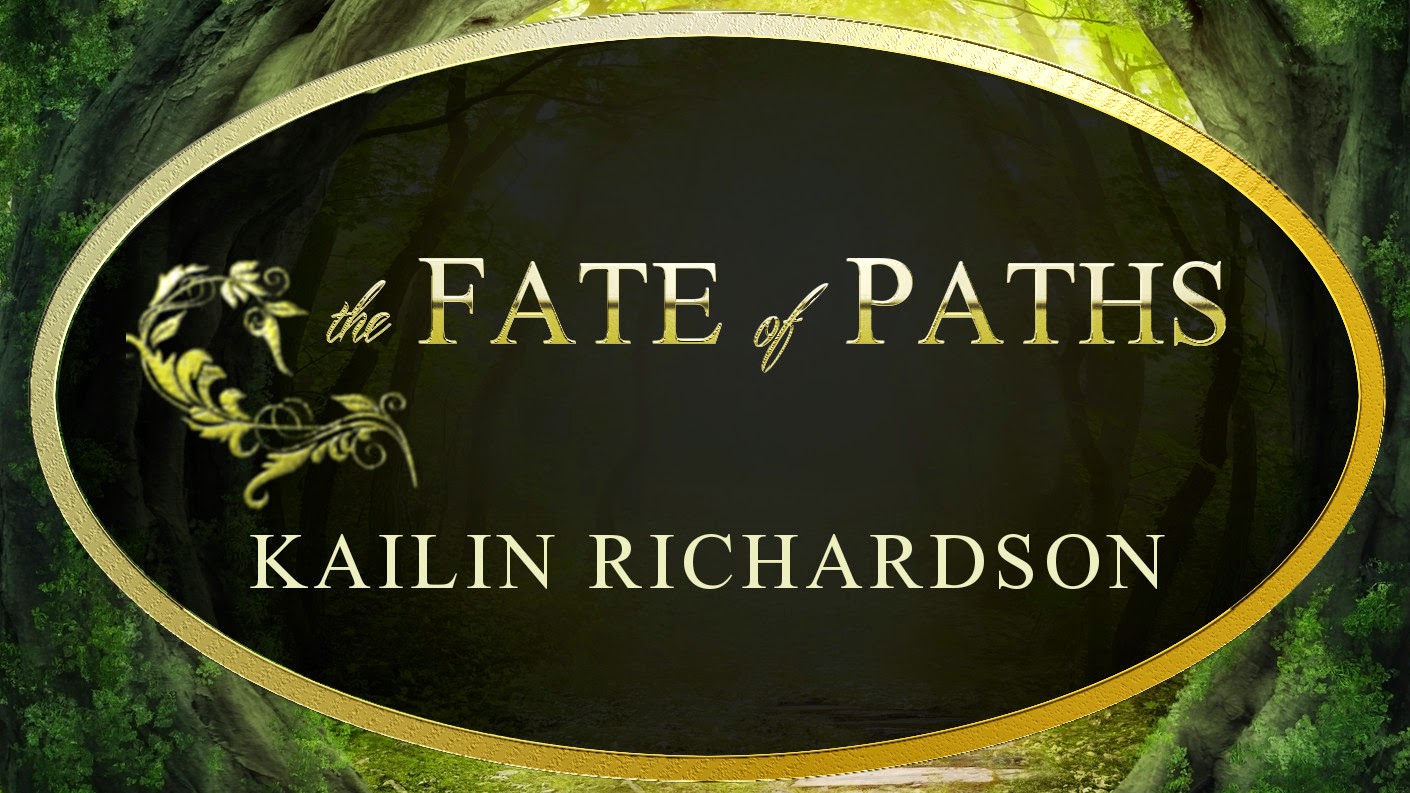 Lionheart leaned slightly out of his perch, scanning the floor of the Wood Between.
Dragons eat it, he thought, now I don’t know where they are!
It seemed as if it had been many hours since he had left the Haven, only to find that his Path led straight into a gathering of strange Faerie creatures, half animal, half fairy, determined to waylay him. How long he must stay here cowering in a tree, he didn’t know.
Traveling in the Wood Between can be most unpredictable, rather confusing, and completely dangerous. However, on some occasions Paths are fated to meet and despite its mysterious power, the Wood cannot change the Paths of those who follow the Lumil Eliasul.
And so it was that while perched inconveniently in his tree, Lionheart heard a familiar voice grumbling to itself.
“Dragons blast all women, “ it said, “we’ll never be rid of them.”
Lionheart sighed, for his tricky afternoon could hardly get better upon the arrival of the Chief Poet of Rudiobus. So he stayed silent, eavesdropping upon Eanrin’s constant complaints.
“It’s been years, and what does she have to say?” he continued, “Only a ‘scat, cat’ for me! It’s as if she’s bitter about something!”
He paused and sniffed, his tail flicking back and forth.
Meanwhile, Lionheart theorized that the poet cat must be referring to the Lady of the Haven, Imraldera. Eanrin’s stubborn nature, however, hardly allowed room for women, Lionheart thought as a grin set in upon his face. He moved slightly once again so as to get a better view of this unusual event.
Eanrin spoke again, “Lionheart, my boy, I’ve spent enough time hanging in trees with you to know your scent.”
Defeated, Lionheart wrinkled his brow, remembering the incident with Ragniprava the tiger. He then proceeded to drop through the Wood’s leafy ceiling, landing rather clumsily next to Eanrin.
“Yes, well, it seems to me you’re having women trouble,” smirked Lionheart, “I thought I could be of use, you see.”
Eanrin scowled through whiskers, “You really are quite the jester, aren’t you? Where, exactly, do you get such experience?”

He smiled, turning back into a man in a sweep of his plumy tail.
As he backed away, it was Lionheart’s turn to scowl.
Continuing, Eanrin said, “If you’re referring to the Queen Varvare, you hardly have any valuable experience.”

“Rosie is only a friend!” gasped the blushing Lionheart, “and a good one who won’t chase after me, at that!”
Indeed, the former prince of the Southlands knew he had little to say on the touchy subject of women. Hadn’t he failed himself with lady Daylily? Hadn’t he crushed Rosie’s own heart, sending her into the Wilderlands? Lionheart shook his head. The Prince of Farthestshore had put the past in the past. He had been forgiven, he was now Childe Lionheart, not Leonard the fool jester.
Following the awkward silence of Lionheart’s thoughts, Eanrin changed forms once again, licking his paws.
“What are you doing here, anyways?” he questioned.
“I could ask the same of you,” said Lionheart.
“I’m coming from Queen Varvare’s celebration, as I assumed you were, too,” replied the cat.
“But…I left before you, because the Prince of Farthestshore asked something of me,” Lionheart stuttered.
“My boy, you must learn the rules, or rather, that there are no rules of Time in the Wood Between, “Eanrin said.
Lionheart sighed. Eanrin’s perpetual scowl through a smile softened a little.
“Don’t worry, now, you’ll get used to it,” he said, “Why were you in the tree anyway?”
“Chased,” remarked Lionheart, “By those silly Faerie creatures that live in the Wood.”
Eanrin asked, “Well, they’re gone now, and I suppose you have a merry way to be going?”
Lionheart muttered under his breath. How ‘merry’ it would be, he did not know, but he had vowed service to the Prince of Farthestshore, and he would obey him to the end. Still, a little quake of doubt shuddered through his heart every time he thought of facing his father, the Eldest of the Southlands, again. But to dwell on the past, he reminded himself once again, is to disobey the commands of the Prince.
Picking up on it, the cat said, “Or not so merry. Have it your way, but I’ll be off.”
Lionheart grinned, “Not yet you won’t. Not till you tell me about your problems…It’s about Imraldera, the Haven keeper, isn’t it?”
As soon as he saw the poet’s face, he knew he’d hit home. Glaring, Eanrin was ready to stalk off, leaving Lionheart in the clearing.
The truth of it was that Eanrin was not ready to tell anyone about Imraldera, or to confess that his undying love of Gleamdren was the biggest lie of his life.
Dragons eat it, he thought, where are the excuses when you need one?
He skimmed his mind of the short time with Lionheart recently. There was nothing to snub at back. Except the old girl Rosie, he thought. He changed forms once again, tired of licking his paws and twitching his whiskers.
“You, my boy, have more to tell than I,” he said.
Lionheart answered, “Cat, I know not of what you speak. What secrets do you keep?”
“None.”
“Really? Then why were you blasting women moments ago?”
“Because they only cause a good cat trouble.”
“Imraldera does?”
“NO!”
“You love her, don’t you?”
Eanrin went quiet. Worse than admitting the lie of Gleamdren would be creating a new lie. His smile finally left his face.
In one last desperate attempt, he answered “Only if you love that goblin Rosie.”
Lionheart scowled more, deciding that maybe he’d best be on his way. But as he got up, he could not find the normally strong Path of the Prince of Farthestshore. So, he sank back down onto the ground next to Eanrin.
“She’s not a goblin,” he whispered, finding that he already missed her, “She never was.”
Eanrin’s grin came back, “So you do love her, boy?”
“Only if you love that Imraldera.”
“Have it your way, “ he grumbled, “Where does your path lead now?”
He hoped that question was enough to get the two denying men apart.
Lionheart said, “I’ve lost it, but I’m supposed to be going back to the Southlands.”
“Back?” remarked Eanrin.
Lionheart’s voice lowered, “He asked me to go to my father.”
Uncomfortable with this topic, Eanrin figured he’d best switch back to the path.
“Well, I’ll help you find your Path, boy.”
Both men rose, feeling strangely raw and uncomfortable. Such is what happens when you are opened up in a way you never expected.
Lionheart squinted and saw that his Path had curiously opened up again.
He said, “Look, I’ve found it.” Then he looked back at Eanrin, now a cat again, “Don’t forget Imraldera,” he said, grinning. Then he vanished, gone to the Southlands.
Eanrin sat in the Wood, whiskers quivering.
“I won’t, boy. I won’t.”
He rushed off on his own Path.
And so it was that two Paths crossed and changed both men in a way they never truly would realize. For Eanrin left remembering that denying his love would be as good as a lie. And Lionheart left, Rosie’s face in his head. Whether it was goblin’s face or not, he knew she would always be there, even she was the last thing he saw before death, for she was his best friend. Maybe more.

Great dialogue between the two! Very sweet and fun!

Loved this encounter between Eanrin and Lionheart. More alike than either of them want to admit! Terrific interchange.

SUCH A GOOD STORY! The dialogue was perfect between the two! Excellently written. I love some Leo-Eanrin interaction! :)

I love how you wrote this story in a "gap" between Anne Elisabeth's novels! :) Give us a taste of what's not there but could have been. Great job!

Enjoyable! Their bound to become friends, don't you think?

I love the humorous tension between Lionheart and Eanrin. Great job, Kailin.

This is so fun! Poor Eanrin and Lionheart are both in over their heads when it comes to dealing with women :) And I always did like Imraldera's "scat, cat" comment! Wonderful job, Kailin!

This is so fun! Poor Eanrin and Lionheart are both in over their heads when it comes to dealing with women :) And I always did like Imraldera's "scat, cat" comment! Wonderful job, Kailin!

Awwww this was so awesome and adorable!!! The dialogue is hilarious and totally right on the nose in style and diction. The characterization is fabulous and the back-and-forth conversation is handled excellently. It's actually a bit frightening how alike these two can be at times... ;) Amazing job!