GOLDFINCH AND THE DRAGON: Meredith Burton 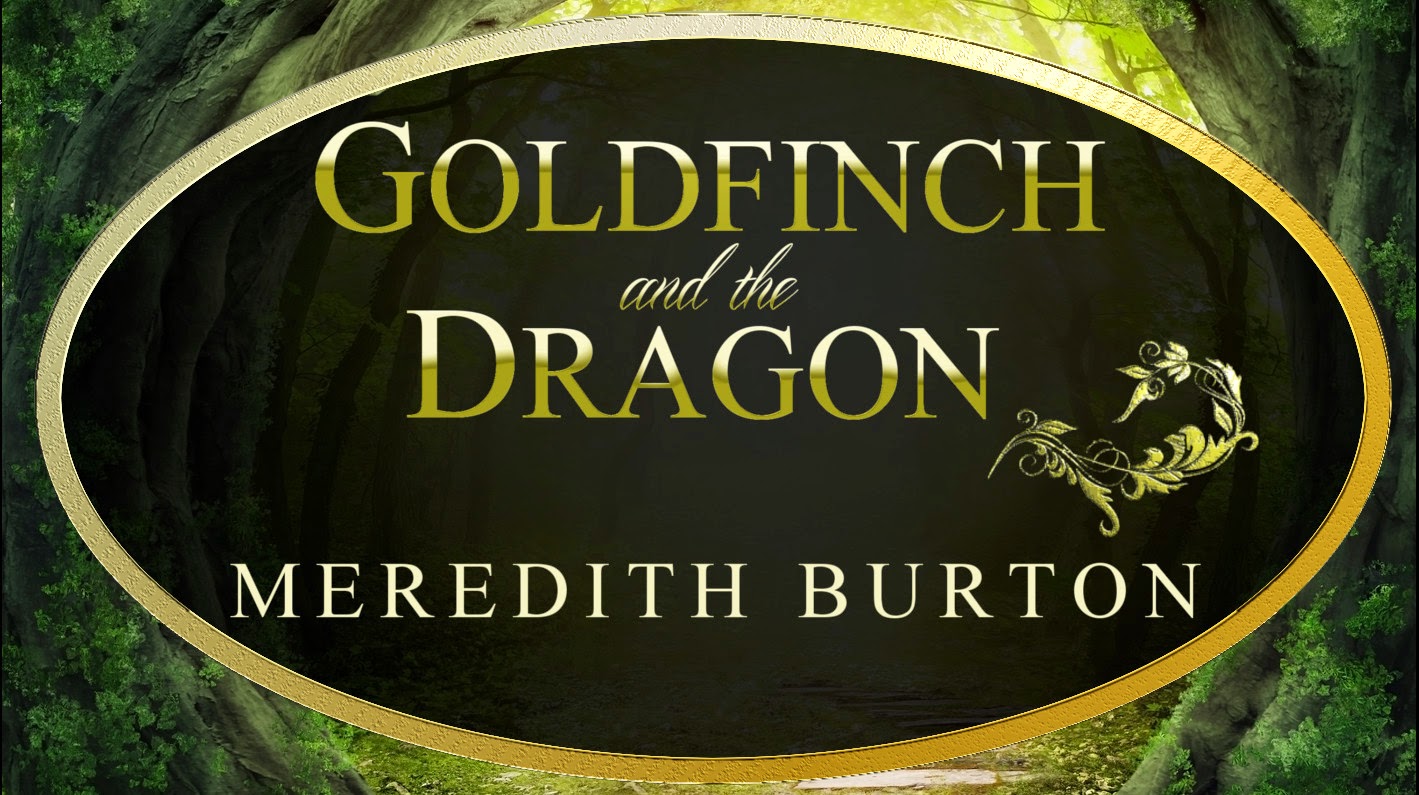 Dedication: In memory of my grandfather, Lilbern Rutledge, (1925-2014), a man of humility, wisdom and courage, a man who opened my eyes through the use of touch, sound and scent.
His heroism as a medic during World War II serves as a beacon of hope in my life. I can never adequately express my love and gratitude.

Goldfinch raised her head, but Deergrace made her lie back down. “Where am I?” she whispered.
“In the cottage, Goldy,” Grandfather murmured gently. He stroked her hand with his strong fingers. “I found you in the midst of the confusion and brought you home.”
Goldfinch shuddered, asking what had happened. It was then that she learned that a Dragon had lain siege to the Eldest’s House. “He sought a princess,” Deergrace murmured. “He’s bound our land and won’t relinquish his hold.” He clenched his teeth, his features growing stony with anger.
Goldfinch learned that many people died the first day Death-In-Life came. Nothing in Southlands would ever be the same again.
Over the next few weeks, under Deergrace’s tender care, Goldfinch grew strong. Even as she did, Grandfather grew weak. He wilted like a starflower, and though his spirit never diminished, it was clear his body was failing. Goldfinch knew that he was dying because of her. He had breathed in a great amount of poison when he sought her out and brought her home. She knew that she couldn’t allow him to die. She just couldn’t. Grandfather had cared for her ever since she was little. He’d taken her in when her parents had died of fever. She owed him something, didn’t she? She loved him, and he mustn’t leave her
*****
The memories receded, and Goldfinch stood, journeying back toward the cottage. She wouldn’t allow Grandfather to see her cry, for she had to be strong.
O-Lay! O-Lee! The strange song stole upon her again. It was as gentle as before but more insistent. Goldfinch turned toward the sound, her eyes alighting upon a majestic fig tree that towered above her. Grandfather had planted seeds years before she was born. Oddly, in the midst of so much devastation, the fig tree was as beautiful as ever. Its branches stretched toward the sky, and a profusion of golden fruit sparkled upon them. Beneath the tree lay a cluster of fallen figs, their sweet scent wafting upon the air. Without thinking, Goldfinch retrieved the figs and placed them into the folds of her garment. She looked at the tree again and blinked in surprise. Perched upon one of the branches was a brown-speckled bird. It cocked its head at her, notes of pure silver issuing from its beak. The bird was not impressive in appearance, certainly not as vibrantly plumaged as other species. Goldfinch smiled as she thought this, and even the bird seemed to smile, almost as if he could read her mind. “Fine feathers don’t make a fine bird,” she whispered, recalling Grandfather’s words.
Despite the unimpressive appearance, there was no denying the self-assurance and majesty of this creature. Goldfinch tentatively approached the tree, allowing the bird’s music to fill her mind. The music rang clearer than ever, and she realized that the bird was indeed singing words:

Author's Note: “Fine feathers don’t make a fine bird” is not an original saying. The credit for that pearl of wisdom goes entirely to my grandfather. God bless you all.

Posted by Anne Elisabeth Stengl at 6:35 AM

Meredith... I am so sorry for the loss of your grandfather. : ( And I am so very, very in awe of the wisdom and courage that allowed you to write this to give us hope. This story's natural beauty is compounded by the true love that shines through it. Thank you so much. : )

Meredith, that was lovely! Truly lovely! It's beautiful that you took your own pain and healing and allowed the Lord to use them by encouraging others! My mother says that the best authors draw from their own life experiences and then put them into their books. Your story is amazing!

And may I just ask.... MEADOWLARK?! Are you talking about the same Meadowlark as Sight-of-Day's and Redman's daughter? Or is it a namesake? I'm so very curious!

Also, I think that you interwove the storylines from the Tales wonderfully. You did very well on this, Meredith!

It is especially powerful that you based Deergrace off your own grandfather. The story rings true and beautiful, and entwines perfectly into the Wood.

Thank all of you so much. Yes, it helped me sort out my feelings by writing this, and I'm thankful it provided some encouragement to others. Pa and I were very close, so writing about him helps me.

To Ms. Natasha: Thanks for your question. Actually, I thought Meadowlark was the same at first but now am not sure because that would make Deergrace very old indeed. However, for fun, I'll say that she definitely is the same. Looking forward to reading your story. God bless.

Meredith, again, you are a great storyteller. This works so nicely with the events of the novels, and I think you nicely got Foxbrush. Interesting to think how very much Meadowlark and her family are connected to the King of Here and There. :)

Your story is a beautiful tribute to your grandfather and the love you shared.

I loved how the Prince was working in the lives of all who were his, never leaving nor forsaking them, guiding them home to the Farthest Shore

Thank for writing this very heartfelt story and sharing the hope that is within you.

Two knights of the Prince were home, and they would always be together.

You did a great job weaving in Foxbrush's story! And it's a wonderful tribute to your grandfather. It's hard to say goodbye to them isn't it.

Thank you all. To Ms. Rina S: Yes, it is indeed hard saying good-bye. So thankful he's no longer suffering and he's with Jesus, but I definitely miss him. God bless you.

This is absolutely beautiful; a wonderful story and tribute.

That was a wonderful story, Meredith. I'm so sorry about your grandfather. My own grandfather is very ill right now and your story was a reminder that no matter the hardships our Paths may lead us through the Prince will always walk with us.
I will be praying for you.

This was such a wonderful story!! And to not only tribute it to your grandfather and integrate him into your story, but to do it so immensely well!! Bravo! It was so beautiful!! And you nailed Foxbrush (one of my personal favorites, so happy to see him in someone's story and written so well!). His interactions with Goldfinch were adorable and so well done!! The message was so beautiful, and it really warmed my heart. And weaving her into the whole fig plotline from Shadow Hand was absolutely genius. Amazing job, Meredith, my dear.

Meredith,
Thank you for sharing this beautiful story! The love between Goldfinch and her grandfather rings true because of your own experiences. It made me think of my own grandpa, who was the humblest and most gentle man I ever knew. I still miss hearing him pray aloud.

I also love the reminder in your story that we can be used to help and encourage others without even knowing it, by doing deeds that might seem small or insignificant, like the figs. We don't always know the impact we have!

You are all so very kind, and your comments are a true blessing. Thank you for your prayers.

Ms. Sara: Thank you so much, and I loved your contributions, too.
Ms. Chloe: I'm so very sorry about your grandfather being sick. Will be praying for all your family. It's always so hard when someone is sick, and I will be thinking of you all.
Ms. Melanie: Thank you so very much for your kind comments. So glad that you like Foxbrush, too. I always felt so sorry for him in Veiled Rose and Moonblood and knew that their had to be more to his character than first appeared. It was so wonderful seeing him take center stage in Shadow Hand. I was cheering at the book's climax! And, I kind of liked the idea that Goldfinch kept talking to him despite his shyness. That's something I do, especially when I feel sorry for someone or am nervous. So glad you think I captured Foxbrush's character. Thanks for the encouragement.
Ms. Sara: Thank you so very much. Yes, we all learn so much from our grandparents, don't we? They work so hard and know about humility and courage. And, yes, our actions can have such an impact on others even if we never know it. I have to remind myself of that everyday.

God bless you all and thanks so very much.

Oh, and Ms. Melanie: I love your anomatic to go along with Heartless!