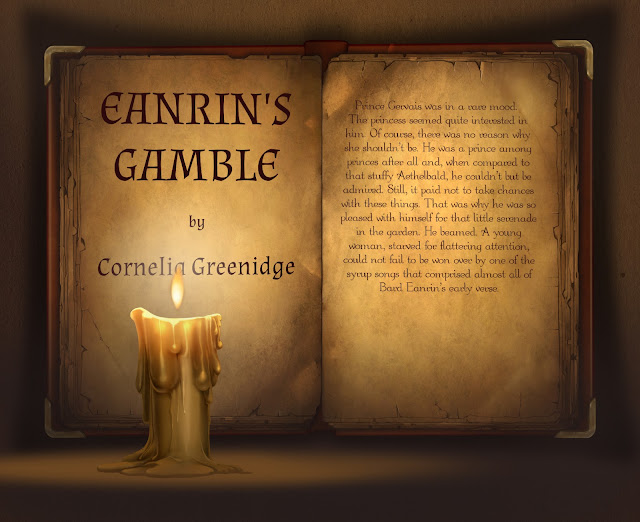 Prince Gervais was in a rare mood.


The princess seemed quite interested in him. Of course, there was no reason why she shouldn’t be. He was a prince among princes after all and, when compared to that stuffy Aethelbald, he couldn’t but be admired. Still, it paid not to take chances with these things. That was why he was so pleased with himself for that little serenade in the garden. He beamed. A young woman, starved for flattering attention, could not fail to be won over by one of the syrup songs that comprised almost all of Bard Eanrin’s early verse.


“If only she’d be mine!” He sang a few lines to himself as he walked. Once he married a noble woman of fortune, his freedom was assured. King Fidel was, as his name implied, a faithful man. He would be sure to look after his daughter’s – and her husband’s – welfare. She wasn’t an unattractive girl, either, this Princess Una. So caught up was he in these happy thoughts that he didn’t notice one of Aethelbald’s knights, a tawny-haired blind man, crossing his path until he’d almost run into him. He brushed past the knight and was continuing on his way, when the man unexpectedly turned and fell into step beside him. The knight grinned down at him.


“That was quite the song selection.”


Gervais stiffened. Something about this man made him distinctly uneasy. “You were listening?”
“I’m blind, not deaf. It was hard to miss that serenade. What made you choose it?”
“Surely you must know the piece.” If this knight was hoping for information to bring back to his awkward master, Gervais had every intention of making it difficult for him. “It is one of Bard Eanrin’s best loved poems. It speaks only of sincerity and true depth of emotion.”
The man made a strange sound. It was like a cough - or a short, choking laugh. Gervais was having too fine a day to be mocked by the servant of his poor rival.
“You believe you can do better, my friend?”
“I believe I have.”
“How about a wager, then?”  He would have money enough to spare when the princess was his bride, and – while he didn’t fancy a duel with the strange knight – this man needed to be taught a stern lesson for his insolence.
“A wager?” It was impossible in this form, but Eanrin’s ears pricked. He had observed Gervais and his men whiling time away in idle gambling, though none seemed too keen on playing with the prince, and he had heard Gervais was known for his persistent promises of later payment. “What sort of wager?”
“A game of hazards. If you win, I will grant you a small fortune. If I, than you must compose a song in my honor – if your verse is as good as you claim.”
The knight was familiar with hazards, a dice game of the near world. Still, he shook his head. “I’ve played greater games for lower stakes than this, but a fortune may be won or lost too easily. No, let’s be more traditional.”
“How do you mean?”
“I win, and you stop pursuing the princess.” Gervais frowned slightly at this suggestion. She was his fortune! Still, this man had challenged him twice now, and no one could do that and walk away freely.
“Very well. And if I win, -” Gervais began, but the knight held up a hand, stopping him. “I, of course, am but a servant and cannot speak for my master’s pursuit of the girl. Your wager will have to lie with me.”
Inspiration hit Gervais. He smiled broadly. “If I win, you, my friend, will serve as my personal bard – or perhaps jester. It’s been so long since I had one.”
“Jester?!?” The knight stiffened, affronted, but stopped to ponder the suggestion. Any man capricious enough to risk losing his lady in hopes of humiliating his opponent, Eanrin knew, could not love her. Gervais had hidden depths of cruelty as well as greed. This made it even more unfortunate that Una appeared quite besotted with him. She would learn in time, but perhaps not soon enough. Unless… Eanrin nodded, thoughtfully. “I suppose I could serve as bard. I already have some small work in that line, but if you’ll permit me the odd holiday, I’m sure something can be arranged.”
Gervais laughed, “The odd holiday? Really, my friend, you are more fit to be a jester. You are too amusing already! But now you must prove your skill before we begin our game.”
One of Fidel’s guards, a suitable judge, was obtained. The game was explained to him, and Gervais again urged Eanrin for a demonstration of his skill before they played. The poet began his song.
“Oh Gleamdrene, your lovely face –” He was cut short by Gervais.
“This must be a song of your own composition, my friend. I don’t wish to be rude, but that was one of Bard Eanrin’s.”
Eanrin frowned. “How could you tell?”
“I am familiar with all of his compositions dedicated to the beauty of Gleamdrene Gormlaith.”
“Really?” The poet looked surprised. “I’m not sure even I recall every composition.”
“They are the ideal of romance to which I aspire.”
Eanrin almost choked. Amusement and concern battled for dominance on his features. Amusement won out.
“Well, a man’s taste says a great deal about him. What about a poem dedicated to a different lady?”
“That would be sufficient proof that it is not Eanrin’s verse. The immortal bard never wrote of anyone but Gleamdrene. Please, carry on with this piece.”
Eanrin chuckled. “Very well, but don’t let word of this one travel. If it returns to the woman in question, and she learns what I made it public for, I could find myself in some very unpleasant water.” And he began. This place in the near world didn’t have the acoustics of the halls of red and green, but Eanrin’s voice carried a far gentler quality than usual, and his tone was sweet.

She walked in strength and dignity,
Walked in a world apart.
She lived in grace and dignity,
Although she did not yet live free,
Until one day, when forced to flee,
She caught my foolish heart.

She walks now on the good, true way,
Caught in the wood between,
I walked with her along that way,
And know that I may truly say
That all the things you see today,
Are none to what I’ve seen.

As he finished, the guard nodded. That poem would serve to let him progress. Gervais also nodded, but more grudgingly. “I shall always prefer the classics, but you have a nice voice and are very entertaining. So long as you have a good store of Eanrin’s Gleamdrene pieces memorized, you would entertain my court very well.”
“Yes, those particular songs always seemed to be rather high in demand in Rudiobus as well.”
Eanrin picked up the die and had them in hand when he stopped. Perhaps it was only right to warn this foolish prince. After all, he was a faerie, and there was a reason the people of the far world didn’t usually gamble with cards or dice. They had an awkward knack of always winning. He continued casually,
“In the event you win this mortal game of chance, you, as a true lover of the art, would be very gracious to allow me to return to serenade them every few decades.”
Gervais had been laughing to himself at the thought of this blind man hoping to best him, but this brought him up short – confused. Eanrin continued, merrily unaffected.
“My king, Iubdan, has always quite enjoyed those pieces, and I confess there are very few entertainments in the worlds equal to my lady Gleamdrene turning up her nose at my latest performance. Spoken, of course,” here he grinned a cat’s grin and rolled the dice, watching Gervais begin to shift uncomfortably, “from my sincerity and true depth of emotion.”
---
Barely fifteen minutes later, Gervais walked off, head hanging, mustering his men to leave Parumvir. It was uncanny! There had been no cheating, no apparent spells or chants over the die, the man couldn’t even see them! The knight had evidently begun enjoying himself, however, and he called after the prince.
“We must discuss the topic of royalties before you leave, of course.”
Gervais wheeled back around. “Royalties?”
“I generally consider my art a free expression of my devotion to be shared with the worlds. However, I understand that you have been putting much of it to your own profit with the fair maids of the near world.”
Gervais opened his mouth to protest, but Eanrin held up a hand.
“Not to worry. I’m not one to judge a man unfairly. Simply provide me with a small payment – the going rate for a bard of my reputation – every time you wish to serenade a young lady. Starting, of course, with that piece you so recently used in the garden.”
“You can’t do that! If you really are Bard Eanrin, men have been wooing women with your poetry for centuries!”
“Yes indeed, but very few turn it into a form of monetary gain.” He turned and began striding away, calling over his shoulder,
“Just see that you provide the first payment or two before leaving. There’s a good fellow.”
And he was gone.
---
Once away, Eanrin finished chuckling to himself and fell – however briefly - into a thoughtful mood. There was something about that fellow, something familiar…that song for Imraldera - for, of course, he’d been speaking about her - brought back memories he hadn’t considered in some time. Memories of a young mortal maiden, of a trip through the wood between, of the lair of ChuMana the serpent and the arrogant prince who had – Eanrin stopped.
“Dragon’s teeth!”

Ha! I love this! You really captured both Gervais' and Eanrin's personalities beautifully. And that ending was wonderful. I think we all wonder about that frog. Keep up the excellent work.

I'm still chuckling to myself. What a clever piece!

Oh my, what a fun story! I loved it! I agree with Meredith, you nailed their personalities :). ~Savannah P.

Wonderful!!! The story behind how Gervais got uncovered! I loved how you did it. AND EANRIN SANG A SONG ABOUT IMRALDERA!!!! And Eanrin can't even remember all his Glemdren songs. XD And that ending! Yes. Awesome.

This is priceless! Absolutely priceless. :)

Oh my gosh, Cornelia, this is genius! I laughed so hard! I mean, ACTUALLY laughed, which takes quite a funny thing to achieve whilst reading. Bravo! I loved it! (Also a total sucker for anything relating to Heartless, so that only increases my love) And the banter at the beginning and the setup and followthrough of the ending was so perfect!!

YES YES YES YES.
Eanrin's song. And that ENDING. What. I can't even- it's awesome. And hilarious.

This is an absolute jewel! Thank you for sharing this perfectly captured scene.