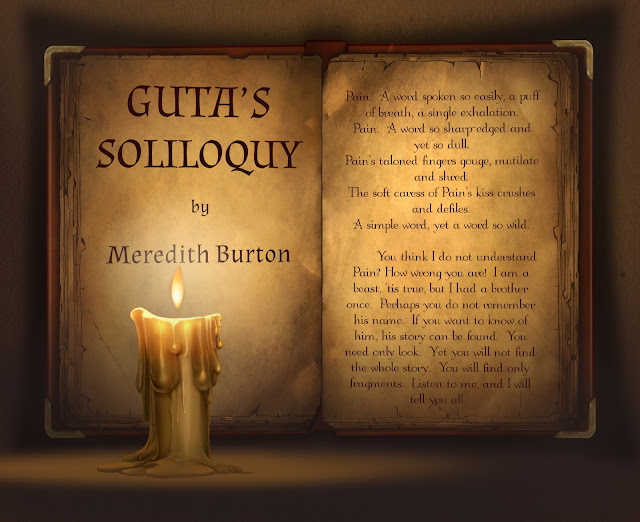 Pain.  A word spoken so easily, a puff of breath, a single exhalation.
Pain.  A word so sharp-edged and yet so dull.
Pain’s taloned fingers gouge, mutilate and shred.
The soft caress of Pain’s kiss crushes and defiles.
A simple word, yet a word so wild.

You think I do not understand Pain? How wrong you are!  I am a beast, ‘tis true, but I had a brother once.  Perhaps you do not remember his name.  If you want to know of him, his story can be found.  You need only look.  Yet you will not find the whole story.  You will find only fragments.  Listen to me, and I will tell you all.

My brother and I were born in pain and blood.  We killed the one who bore us.  Twins we were, identical in ugliness, identical in being unwanted.
Who was our father, you ask? You would call him a beast, and you would be correct.  Our father found our mother in the Wood one day, a mortal maiden lost and alone.  He grew weary of her after a time, as the Faerie beasts can be fickle.  However, he did not leave her alone completely.  He wanted to see his children.  He was not pleased with what he saw.  I have felt his blows on many occasions, although my brother suffered most.
Despite our father’s treatment of us, my brother admired him, for he shared Father’s aspirations to rule a demesne.  I believe he was seeking something more, perhaps our father’s praise.  How foolish! From observing my brother’s actions, I’ve learned that stealing a kingdom is folly.  My brother gained ascendency over a mortal village.  This action resulted in his undoing.  I’ve learned that it is best to be alone and seek what sustenance you can.
Centuries have passed, and my father is no more.  He was not a Faerie King, so he did not have three lives.  And yes, if you are wondering, my father died by my hand.  I feel no remorse.

I first feasted upon Pain the day I encountered a young girl.  She was lost in the Wood Between.  She was running in panic, heedless of the Paths.  Tears flowed like rivers down her cheeks, and she repeatedly pleaded for help.  As she cried, I heard singing.  Someone called to the girl, seeking to lead her to safety.  I had to act quickly.  As the girl floundered past the pit in which I lurked, I reached out and clasped her ankle.  Why did I do this? Because she represented all that I did not have.  You call me a monster, but cannot a monster suffer loneliness?
I could not keep the mortal girl.  The interfering Songster wrenched her from my grasp.  I will not dwell on that fact.  I will instead think of the feast itself.
Whenever I feast, I taste another feeling beneath the pain, one that I cannot name.  That feeling tastes so very sweet.  Sometimes, mortals journeying through the Wood consume a golden substance that they call honey.  Although I have never tasted honey, I wonder if the sweet taste of which I’ve partaken is similar.  I told my brother of that feeling, telling him he must taste it for himself.  We often met and discussed our conquests.  How I miss our talks.  You do not know how bereft you are of something until it is gone.

You ask why I beat my victims? It is because Pain heightens the taste of the sweetness.  There are certain people who struggle so mightily against me that the other feeling rushes from them in waves.  But, as with all types of feasting, once the meal is consumed, the feelings vanish.  I continue to seek that feeling, hoping that one day it will remain.  It never does.
I still hear that interfering singer.  He is entangled in every story.  Despite all I do, he cannot be silenced.  Why?

Pain is my companion.
He is a demanding but constant master.
I will feast until Lumé and Hymlumé cease to rise,
Until the mountains crumble into the sea.
For in serving Pain, I serve myself.

Ooo, this leaves a bit of a chill on the spine. He's such a dark and lonely faerie, you can't help but pity his black soul. *Shudders*

Uuuuuuuuuuuh, Guta. *shivers* Creepy, creepy thing. And now I dislike him even more!

You know, I didn't actually remember Guta...flighty mind that I am, so I went back and looked it up. Wow, the amount of depth to this soliloquy!! How you got into a mind so twisted as Guta's and presented it as something we can understand and ponder! The execution of his point of view is fabulous, and, as I've said before, I absolutely love your diction and writing style, Meredith! It's so simultaneously detailed and immersive!

Ooh, creepy but very well-done. (Though I shouldn't be surprised- you wrote Cren Cru's Lament last year, didn't you?)

Oh, Meredith! You've done it again! Powerful! Sad! Creepy! And the final line is such heavy truth to bear. But we have hope, don't we?

Come unto me, all ye that labour and are heavy laden, and I will give you rest. Take my yoke upon you, and learn of me; for I am meek and lowly in heart: and ye shall find rest unto your souls. ~Matthew 11:28-29

To Ms. Sarah: Yes, Cren Cru's monologue just came to me and basically wrote itself. She? He? It? Is a chilling but compelling character. Thank you.
To Anonymous: Oh my, yes! Thank God for His hope. That verse is one of my absolute favorites as is Isaiah 40-1: They that wait upon the Lord shall renew their strength. They shall mount up with wings like eagles. They shall run and not grow weary. They shall walk and not faint.

Thank you all so much.