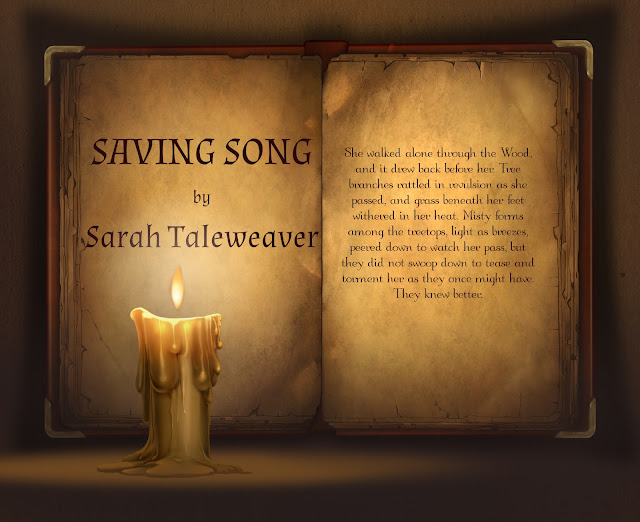 She walked alone through the Wood, and it let her pass. The tree branches rustled, whispering to each other. Misty forms among the treetops, light as breezes, peered down to watch her pass, but they did not sweep down to toy with her, for they saw the Path she walked and knew better.
Where did she go? She knew not. But she knew on whose Path she walked; he had set her on it himself after he freed her. It was, she knew, a Path she should have been walking for years, but that was all right. She would make up for lost time, wherever the Prince’s Path led her.
In the back of her mind, a vague memory of burning shame, of the pain of death, of flames trying to hold her fast. But far more clear was the freedom she felt now, the relief of leaving the fire behind, and the song that had saved her and now filled her mind.
Beyond the Final Water falling,
The Song of Spheres recalling,
When new life beats within your heart,
Won’t you follow me?

You did a great job with this story, Sarah! It's beautiful :). ~Savannah P.

Magnificent and beautiful, Ms. Sarah. I loved that the young woman was a Knight of Farthestshore before her transformation. It really brought home the theme that servants make mistakes but we can seek redemption. Thank you so much for this story. Wonderful work.

I really liked your story, Sarah. Your writing was magnificent and you did a really good job with presenting the theme. The way that you had the ending tie-in with the beginning was very nice.
I'm curious, though, is Taleweaver a pen name?

Wonderful Sarah! I loved how the end was like the beginning, but good and hopeful and faithful! Fantastic. Very good story. And I agree with Meredith about her being a Knight of Farthestshore but falling but being saved again!
Beautifully done!

Thank you, everyone! I'm glad you liked it! It's an idea that I've been toying with in various forms since I read Heartless (maybe even longer- the fist seeds were planted by the Wingfeather Saga, I think).