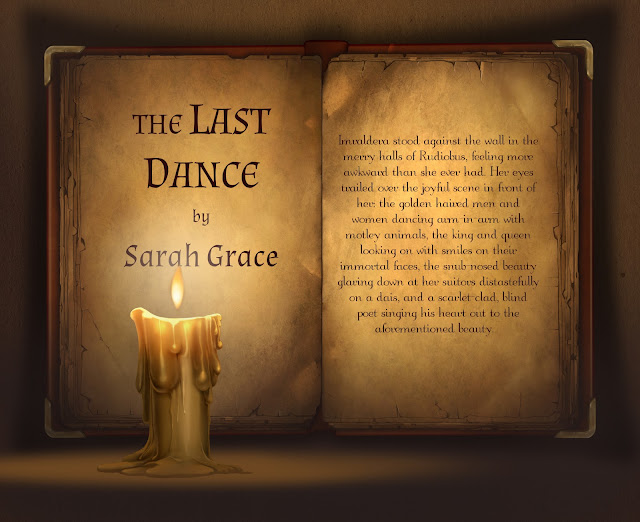 Imraldera stood against the wall in the merry halls of Rudiobus, feeling more awkward than she ever had. Her eyes trailed over the joyful scene in front of her: the golden haired men and women dancing arm-in-arm with motley animals, the king and queen looking on with smiles on their immortal faces, the snub-nosed beauty glaring down at her suitors distastefully on a dais, and a scarlet-clad, blind poet singing his heart out to the aforementioned beauty.

"That's a terrifying concept, Lady Gleamdren. We do not need two Eanrins, to be sure." Loved that part! This story is great, Sarah! ~Savannah P.

Finally, Imraldera and Gleamdren converse! Oh how fantastic! I absolutely love this! And Imraldera is right. There cannot be two Eanrins. Great job!

AAWWWW!!!! I loved this! I think you did Imraldera PERFECTLY.

"Good. I like me." He grinned, inclining his head towards her conspiringly. "I like you, too."
I'm melting. Oh joy. Imreldera and Eanrin!

Gleamdren and Imraldera confrontation, YES. It must happen someday. :D