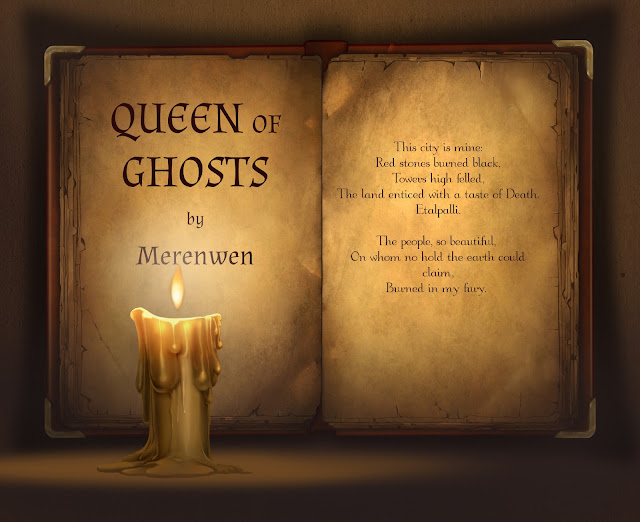 This city is mine:
Red stones burned black,
Towers high felled,
The land enticed with a taste of Death.
Etalpalli.

The people, so beautiful,
On whom no hold the earth could claim,
Burned in my fury.

Ghosts I rule now,
Echoes and screams of dreams lost.
The Pit is filled with their cries,
A coldness in the midst of the leering sky.
Etalpalli is my demesne.

The streets I roamed, burning with the hatred
That had given this land a thirst for blood.
The graves, the horrible graves!
For a moment my fire freezes.
Etalpalli!

This was not meant to be!
Etalpalli!
Faces dear, wings spread in glorious flight.
A crown, a mound, and the Bronze.
Faces torn thin in resistance.
The fire overtakes me.

Posted by Anne Elisabeth Stengl at 2:00 AM

This poem is so beautiful, but so sad at the same time. You did a wonderful job, Merenwen :). ~Savannah P.

Oh, these Etalpallian poems are killin' me! Beautifully done!

Oh wow. Beautiful! Haunting. So Hri Sora! Yikes, yeah Hannah what is with all the Etalpallian poems? I guess it's kind of the saddest story there is, and poems are good with sadness. Especially this one. Great job Merenwen! Fantastic!

Beautiful. I liked how this poem is Rhi Sora's address to her demesne. You really captured her spirit's sorrow. I'm really enjoying all the poems about Rhi Sora. Obviously our hearts break for her. Her character is so fascinating.

Wow. Reading that line, "This was not meant to be!" is one of the few times I've ever really felt for the Dragonwitch - a queen who once loved and wanted to serve her people. I love that.

Chilling. I don't usually like free-verse poems, but this is excellent! Beautiful and deeply sad. Very well done!

Glad you all enjoyed it! I had fun writing it. Well, not "fun" per say, but a bittersweet enjoyment of sympathizing with Hri Sora. If you know what I mean... :)

Thanks for the encouragement. ^.^