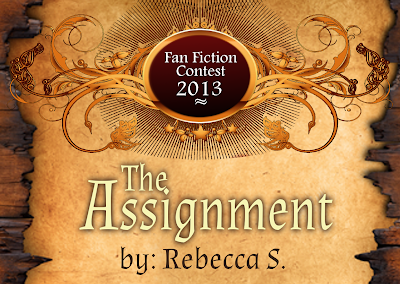 
Posted by Anne Elisabeth Stengl at 6:04 AM

Hee hee, Eanrin's inner dialogue made me laugh--I especially loved his comment about it being all muscle! I thought you captured the characters perfectly, Rebecca! Awesome insight into the beginning of "Heartless"; loved seeing it through Eanrin's 'eyes'. Great job!

Thank you soo much, Rebeka! I am so relieved you liked it. :)

'One was splashing around in the stream loud enough to wake the dead.'
Ha ha ha! That one really got me. :D

Ooooo, adorable! I love seeing Eanrin's perspective on this story. And like Beka, I love his inner dialogue. 'All muscle'! So much fun!

Oooh, I love it! I've always wondered what Eanrin might be thinking during that scene, and I think you captured it perfectly! I love Eanrin's "cheery-bye". :P

What a precious and ingenuous way to show the events of Heartless' prologue from Eanrin's perspective! Simply wonderful, and, like the others have said, "its all muscle" made me laugh out loud. Great job.

Very satisfactory! I could feel Eanrin's frustration at this assignment, but was pleased that he came around at the end. This made me smile! :)

Hehe! Eanrin is right on character in this story! Love it!