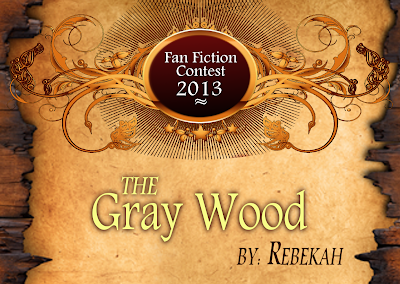 
Posted by Anne Elisabeth Stengl at 6:12 AM

Rebekah, this story was so intriguing, and the atmosphere so eerie and thrilling. I actually want to know more about what happens to these characters after the end--does Moss ever truly understand the nature of the One she met?

No... silly girl to not see what is in front of her, so blinded by what she had before thought, no.... She never does.
*Sigh*. I think I'll go and cry now at the thought.

Ooo, what an eerie setting. So brave of Moss to search for her brother! But she didn't believe the Prince. Such finite triumph when she found her brother but such infinite tragedy when she left the Lumil Eliasul. I hope she returned to him.

I'm so glad to find another story set in the era close to the events of Starflower. A nice depiction of a sister's love. Very interesting that she rejected the Lumil Eliasul's help, but I think he helped her anyway. At least, I hope that was him who led her to Foxeye. Or, is it possible that it was a certain Beast who had seduced the young man into giving him entrance to the land? Hmmm. I hope the former, but its intriguing either way. Excellent job. God bless you.

Well done! This story was very haunting, but there was joy when the stream found its Maker, and ultimate sadness when Moss rejected hers. I loved the setting of the Wood and the way you described it so well.

Thank you all! But I don't think I got Lumil Eliason's lines right.