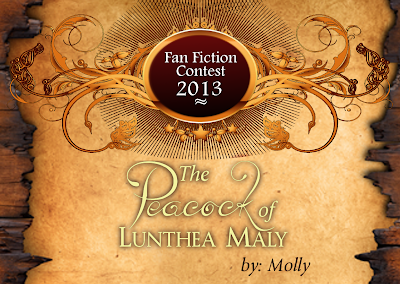 Posted by Anne Elisabeth Stengl at 6:15 AM

Molly, this story was absolutely delightful! The peacock made me laugh, and your prose was so charming and fun! Great work!

Lol! Such a fun story!

MOLLY I LOVED THIS TO DEATH!!! Excellent...simply excellent. You are such an incredible writer.

To take a quote from Hannah W.: *blushes and dies of embarrassment*

Thanks y'all! I had fun writing it, lol!

The peacock reminded me of my cat. :)

Completely cute! I'm so glad you wrote this, Molly! It's so much fun!

Great job! Loved how the scene with Lionheart was shown from the peacock's eyes. Also, I loved how the peacock didn't know when he was being mocked. Sounds like he's learnt a lot from his ordeal. This was such a cute story. Keep up the outstanding work. God bless.

Great job! This cute story felt like a fable; it taught a great lesson and kept me smiling throughout.

Did I mention I love peacocks?

Fun story with a great moral! I have a big smile on my face. Well done, Molly!