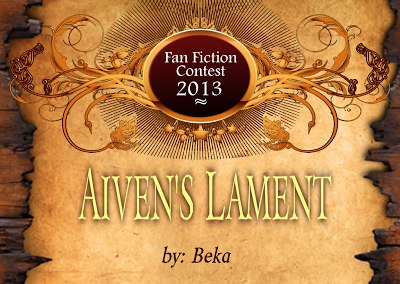 The orange-smeared sky stared down at the woman standing on the hill, smirking with crimson-cloud teeth at her misery. Dry yellow grass peppered the ground beneath her feet, sloping to meet the charred remains of the earldom of Aiven. Once-strong stone walls had crumbled, and the city gate had been torn to shreds.


Tears trickled down the woman's cheeks. Gripping the handle of the sword she held, she staggered forward. Rage and sorrow battled within, one screeching for revenge, the other pleading with her to give in and simply mourn.


Her throat tightened, more tears stinging her eyes. Her home had been destroyed, the only living remnant the image and sounds branded into her memory. The screams. The flare of fire. The roar of the Dragon. The glazed stares of those poisoned by the Smoke.


And the wide, gaping Gateway to Death. Her steps faltered and she retreated, the sword dragging in the dirt. She had ventured too far, suffered too much, to be stupid now. She would be risking her life to save a city full of nothing but corpses and Death.


The Dragon owned Aiven--but at least he did not have the Prince's weapon to use against those who belonged to the land of Farthestshore.


A dry wind swept up from the doomed city below, scratching against her cheek and idling its fingers through her red-gold hair. She sank to her knees and bowed her head, her hair sliding to cover her face.


From behind her came the crunch of grass beneath a heavy tread. She sucked back her tears, raising her head to meet the dark gaze watching her from a gray, craggy face. "Gargron," she whispered.


His arm reached out, his hand clasping hers as he helped her to her feet. "I'm sorry," he said. In his voice she heard the empathetic sorrow of one who had lost his home as well--and not just his home, but the person he had once been.


He wasn't Gargron anymore, wasn't the handsome, olive-skinned man whose looks had been second only to those of his brother, Vahe.


He looked down at her. His ugly face was enough to scare the life out of mortals. But, staring into those kind, gentle eyes, all she wanted to do was allow him to hold her as she wept.


Instead, she set her chin and planted her feet, facing once more the destruction of her people. "Where am I to go now?" she asked the empty air before her, though she directed the question at Oeric.


"With me," he said, and her pulse quickened.


He smiled at her. "Into the Wood, my lady. Our Lord wishes you to return Fireword to Him--and you never know. Perhaps He has a plan for you neither of us can foresee." His deep, gravelly voice buoyed her up, daring her to hope.


At his back stood the trees of the Between, waiting, dark and green and watching.


In that moment, suspended between the ashes of her home and the lush life of the mysterious trees beyond all she had ever known, the Lady of Aiven made her choice.


And so the Lady turned, Fireword at her side, and vanished into the Wood, leaving the hill and smoke-smote Aiven behind.

Posted by Anne Elisabeth Stengl at 6:05 AM

You've left delightful, encouraging comments on each work, and now I share my thoughts for your work :)

This was a gorgeous story, Beka. I loved how the Lady did not care how much uglier Gargron/Oeric was than he used to be; you had me entranced throughout the story. I literally could not stop reading, even though I was trying to finish up something else. :p
I enjoyed reading this a lot, and I love reading the comments you leave after every work.

Oh, how great to read 'The Song of Fireword' in novel form. I wonder if this will be similar to the actual story! So interesting to think that Oreic might once have been handsome too! Again, your descriptions are entrancing. Lovely.

@Molly--thank you so much for the kind words! I love the Lady and Oeric very much--they're one of my favourite couples in Anne Elisabeth's books. ;) And hee hee, that my story distracted you from other things is the best compliment you can give a fellow writer. :) And I'm glad you enjoy my comments--it's nice to buoy each other up!

@Hannah--Yes, I loved that poem; it just drew this story in my mind and I had to write about it! And thank you--description's so hard to write, lol.

This is such a lovely story, so vivid and touching. The imagery and descriptions are amazing. Keep up the good work!

This was a beautiful story, so powerful in its description of Aiven's pain. The personification was excellent, particularly your description of the sky smirking at the lady. I love Sir Oeric, and it was so wonderful to see him come to the lady's aid. I loved the theme of refuge and love in the midst of turmoil. Terrific job! God bless you.

Meredith, thanks so much for the kind words! I'm glad you enjoyed the story!!! :D

Wow...I always wondered about that poem, and this snippet of what I'm sure is a much longer story really grabbed at me. Great writing and descriptions!