As the second part in my feature of our favorite historical author sisterly duo, I give you teen authoress, Abigail Hartman!

About Abigail
Abigail J. Hartman writes historical fiction and fantasy from her home in South Carolina. Being taught at home for all her schooling years, she has had ample opportunity to branch out into the subjects she enjoys most: history and literature. The Soldier's Cross is her first novel. 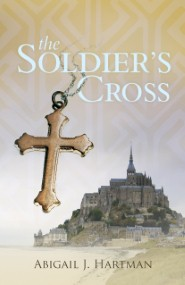 A.D. 1415
Fiona's world is a carefully built castle in the air, made up of the fancies, wishes, and memories of her childhood. It begins to crumble as she watches her brother march away to join in the English invasion of France. It falls to pieces when he is brought home dead. Robbed of the one dearest to her and alone in the world, Fiona turns to her brother's silver cross in search of the peace he said it would bring. But when she finds it missing, she swears she will have it and sets out on a journey across the Channel and war-ravaged France to regain it and find the peace it carries.
I know many of you readers are aspiring authors yourselves. So, for your sakes, I asked Abigail to answer this question:
I'm sure you get this a lot, but I know it's what everyone is wondering, so I'm going to ask it anyway! How did you, a busy young high school girl, find the time, gumption, and drive to write and polish a manuscript? And what steps did you take to prepare it for publication?
Abigail:
Well, the true answer is that my name is actually Loki and I found myself burdened with glorious purpose.
Glory and joking aside: a lot of people do ask how I manage to juggle schoolwork and writing without totally dropping either. When I began writing The Soldier’s Cross, I had just begun high school and courses were getting more difficult; plus it was my first year of competing in November’s National Novel Writing Month, or at least my first year competing with a plot. There were a number of things that I couldn’t ignore (no teacher is really interested in hearing that your essay is late because you’re trying to write a novel) and that had to be balanced. Now I’m in my senior year of high school and the case is the same.
The truth of the matter, however, is that there will always be other areas of life that require a writer’s attention: schoolwork, housework, jobs, family, reading and exercising and a hundred other things.  If we spent all our time actively writing, we would no longer have anything to write about. We have to recognize the importance, and the level of importance, in everything that we do and operate accordingly. For me, this means that I discipline myself to do schoolwork and also to carve out time to write, because while one is significantly more enjoyable than the other, both are important. I don’t expect there will ever be a time when I will stop the juggling act; but writing will always be a part of it, because writing is part of me.
As far as preparing The Soldier’s Cross for publication goes, I have to confess I was pretty ignorant about the whole thing when I began. The first thing I did was to go through the story and iron out the crinkles in the plot; I knew enough to do that!  I also did some rewriting after a personal “line edit,” composed primarily of weaving in a romantic subplot. After that, the major thing was trawling through a massive copy of Writer’s Market Guide, choosing a number of prospective publishers, and querying them. When I signed with Ambassador Intl., they had another editor go through the manuscript and suggest alterations. It turned out to be a significantly more laidback process than the mad dash of writing the story was!
But I know better now than to expect that to ever be the case again.
___________________________ 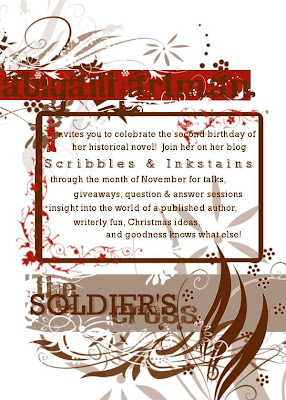 Abigail, I enjoyed this interview! I have to confess, schoolwork is (much as I enjoy a lot of it!) a continual struggle with all my love of writing blooming so much at the same time. I know that if it were not for my writing and reading, I'd be all but done with school by now... but alas, I've got another two years at least... :(. I am realizing more than ever the importance of working on my duty... that schooling is my current vocation, and like a doctor has to attend to his patients, a student to his schoolwork even if I want to write on my novel so much!

So, your words were really what I needed to hear today, "We have to recognize the importance, and the level of importance, in everything that we do and operate accordingly. For me, this means that I discipline myself to do schoolwork and also to carve out time to write, because while one is significantly more enjoyable than the other, both are important."

I am working on learning to juggle life, school and writing all in their proper place... but it's mighty challenging! Thank you for the encouragement :)

Love, Joy.
I hope to resume our lovely e-mails once December comes along, God willing. I think I'm missing them!! :)

Ha ha!!! I loved your Loki reference! :) This really does encourage me, Abigail...I am a senior as well, and it's hard for me to find time to write. Most of the time I focus mainly on school, but I will have to start a juggling act of my own!

Congratulations on publishing your book, Abigail! I looked on your blog and saw that you have other works as well. It's so amazing and wonderful that you got published while a teenager. Your story is very inspiring, and I hope to read some of your books soon.

Thanks so much for having me, Anne Elisabeth! It was good to have an opportunity to pull together a semi-coherent answer to this question; it does pop up a lot, but generally in settings where I have to fumble for a response.

Joy - I confess, schoolwork is more of a bother some days than others. During NaNo, for instance, I would much rather be writing than doing accounting! On the other hand, though, if all I did was write twelve hours every day, I think I would shrivel up and die. Though admittedly, accounting isn't exactly inspirational...

Clara - As my three-year-old nephew says in a mash-up of The Avengers and Pixar's Up: "Avengers are out there!"

I'm glad you found my ramblings helpful, and I hope you'll find yourself able to fit in more writing time! I know how hard it is to give that up, even for a little while. But graduation is just around the bend...!

Hannah - Aw, thank you! You're very sweet. My sister and I were very blessed by the ease of our debut novels being published, although we're gearing up for a harder time of it later on. We've definitely been spoiled! Anyhow, if you haven't already, I do hope you'll join in the blog party book giveaway. It's open to everyone, and you might get a chance to read the novels sooner rather than later.