A Note from the Judges: "This charming story made me smile and laugh—it is sweet and so very fairytale! I love the beautifully detailed illustrations." 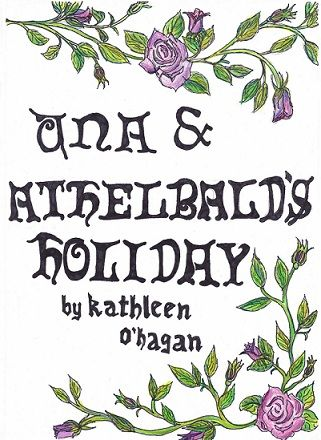 na’s hands worked quickly as she braided her hair. She sat gracefully on a golden throne in the middle of a court room, every eye was on her, but she was not conscious for her thoughts darted from place to place, trailing through majestic wood and fairy-tale castles, when an idea struck her. Smiling, Una inquired of her husband, "May we travel through the faire lands and see its wonders? It would be a wonderful way to celebrate our wedding." 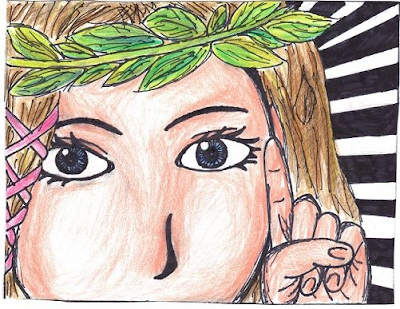 This is the beginning of Una and her husband Aethelbald's holiday... and a very adventurous holiday it was. 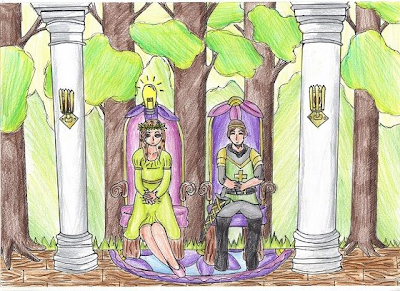 he trip was organized and two weeks later Una, Aethelbald and a company of knights set out for their holiday and into the Wood Between. Soon they came to the Haven. As they walked through its halls, its high ceiling drew her up to the sky, the complacent blue stretching far and wide. Majestic trees either side stretching out over to its neighbor.

Una's smile grew when she saw a lady around the corner. As she led Aethelbald on towards the lady of the Haven, she became aware of the stern face the lady carried. 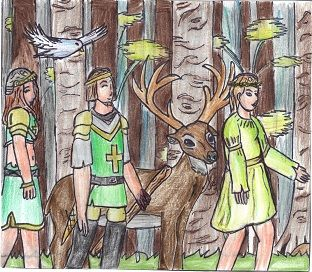 "What trouble causes you to frown, Imraldera? What news do you have for me?" inquired Aethelbald.
"My prince, I'm afraid Eanrin has got himself into much trouble. He has insulted Ksathral, emperor of Kaardotha, and is going to be hanged!" answered Imraldera.
"We will go to Kaardotha and rescued Eanrin", replied the Prince.
So as soon as they arrived, they left with the good wishes of the Lady of The Haven and a ginger cat to rescue. 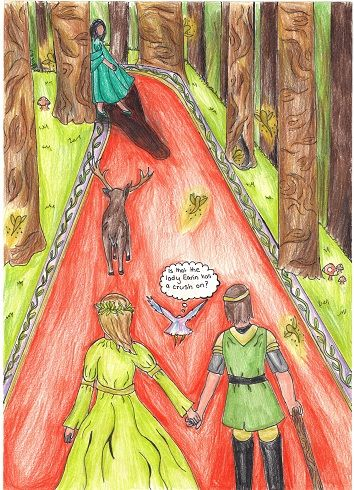 hey travelled far through the forests of Goldstone till they came to a clearing in the wood. There they found a dark glimmering pool. As Una stared into her reflection on the glass-like water her husband gently held her hand and said "Jump into the portal." Aethelbald slowly walked to edge of the pool with her. Her hand tightened around his and as she sucked in one last breath of air they jumped and were submerged in water, drowning out all noise from the outside world. As she sank deep into the pool, all feelings were lost to her except the constant hold around her hand and a cloud of blue that surrounded her. Her lungs started to burn as she struggled to get up to the surface. Slowly she saw light from above and as she burst out into the open she saw a marvellous sight. 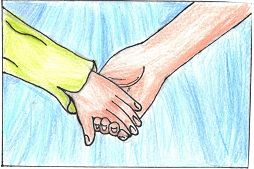 Where once had been a small pond surrounded by birches was now a laughing water fall; but as she looked more closely she saw it turn into a nymph, it's eyes sparkling with amusement. Above it was an entire village of cat people; amber cats, beige cats, chestnut cats, all kind of browns cats in colourful garments. The sight of a nymph was weird enough but a village of cats quite took her by surprise. Still hand in hand with her husband they slowly climbed out of the river. 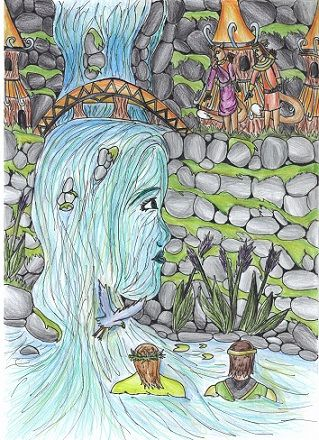 Suddenly, a shout from overhead called out, "Intruders, intruders, arrest them immediately!" Soon her, her husband and the knights of farthest-shore were surrounded by cats in red and purple robes. Una's eyes rested on a figure in the middle of the party, his commanding posture singled him out as the leader and before she had time to examine him more, his voice shouted over to them "What business do you have in Kaardotha?"

Her husband replied, "I have to talk to Ksathral, on urgent business."

"Take them to the emperor, he will decide what to do with them," the cat commanded.
____

na walked through the colourful village, her husband by her side. As they came to the town square they saw a gathering of cats and in the centre was a wooden stage with steps on its left. There, in the middle of the stage, was the emperor and beside him was Eanrin ready to be hanged! Una rushed toward the gathering but was stopped by the mean faces of several guards. She watched in horror as the cord was pulled onto the cat's neck. She stared back to her husband a silent cry slipping through her lips. Then she heard her husband’s voice erupt in anger. 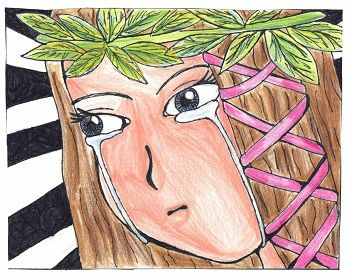 "What right have you to hang one of my knights?" he cried.
The emperor caught by surprise turned around to question the one who opposed him. "Who dares question my authority? This cat has insulted me in front of all my court, by law he is condemned to death!" he shouted.
"He is my knight and all he does is on my forehead. What will appease you to let him go?" Aethelbald retaliated.
"I will think about it." the emperor declared. 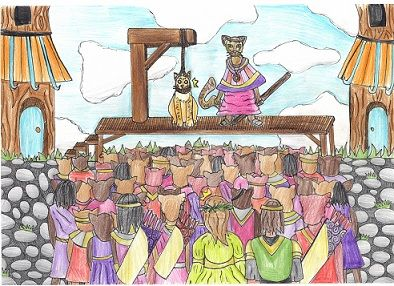 Two weeks later Sir Eanrin was out of jail. The emperor, although still mad, let them go and he returned to the Haven, safe and sound for now.
___

"My tongue was too quick,
for that ancient cat.
He locked me up,
for my poetic words.
But then came my hero,
with his lovely wife.
With a handful of words,
he set that cat right.
So ye old sing with a thankful note,
To my dear old master for the debt I owe."
- Sir Eanrin, a ginger cat if ever there was one.
Of course Eanrin wrote this before he found out that in exchange for his life he had to clean the whole town square of Kaardotha. 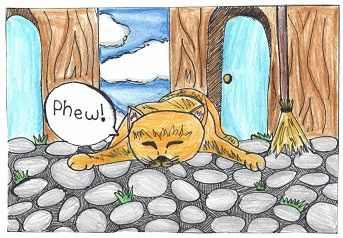 Oooh my goodness! This is really too cute and imaginative for words. The illustrations are simply gorgeous! The little details are great! And I love the fact that Una has already picked up on the feelings between Eanrin and Imraldera.
What an interesting Faerie Demense, where cats are tall as people and wear clothes! I gotta wonder what Eanrin said (or did) that got him into such trouble. The last picture is adorable!

So a funny glitch just happened. I clicked "refresh" scrolled down to the end of the story and discovered that I had missed the entire end of the story!!! The poem and the hilarious ending! I think it's my computer's problem.

I loved it! So cute and beautifully illustrated. Well done!

Those drawings are lovely!! What a fun story - I agree with Hannah about it being so cute and imaginative! :)

Haha! Loved it!! The drawings just made it all the better! =D

Hilarious. But what is the bird saying in the fourth picture?

By the way, in case anybody would care, there is a hymn called 'My Father's World' that mentions the songs of spheres.

Thankyou guys for your lovely comment, I really appreciate what you have said :)

The bird in the fourth picture is saying:

"Is that the lady Eanrin has a crush on?"

Wonderful fairytale! I absolutely love the illustrations, complete with an illumination! Charming truly is a perfect description. Very enjoyable!