This week, I have the fun of participating in a Birthday Book Party! Sister authors Jennifer Freitag and Abigail Hartman are celebrating the two-year birthdays of their debut novels. As part of that celebration, I am spotlight featuring them here this week.


First of all, give a warm welcome to Jennifer Freitag. 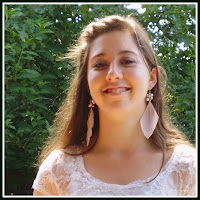 About Jennifer
Jennifer writes fantasy and historical fiction from her home in South Carolina, where she lives with her husband and two cats. Her inspiration flows from writers like C.S. Lewis and Rosemary Sutcliff, both of whose works have influenced her first novel, The Shadow Things. 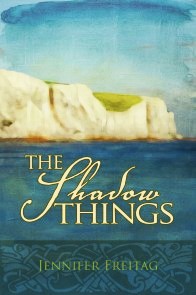 About the Novel
The Legions have left the province of Britain and the Western Roman Empire has dissolved into chaos. With the world plunged into darkness, paganism and superstition are as rampant as ever. In the Down country of southern Britain, young Indi has grown up knowing nothing more than his gods of horses and thunder; so when a man from across the sea comes preaching a single God slain on a cross, Indi must choose between his gods or the one God—and face the consequences of his decision.
But now I'd like for Jenny to tell us a little bit about The Shadow Things in her own words! So, for the sake of you curious readers, I've asked her this question:
I would like to know why you wrote this book. And I do mean this book, specifically! Considering the busy imagination you have, what was it about The Shadow Things that compelled you to write it instead of another story?

Jennifer:
I almost wish this was a very difficult question to answer, that I had some deep inner struggle between this story and that, and that The Shadow Things won out because I felt that its message was pertinent to the world.  That would make a great miniature hero-story of my own, but that just wasn’t the case.

I wrote The Shadow Things because…I just did.  It is very rare for me to recall the exact blink of time in which I sat down and began the first line of a new novel, but I do remember writing the first page of The Shadow Things.  I had no heart-felt drive to write it because I felt the world needed it (that would come later), nor even because I wanted to write this tremendous though tiny story just to get it out of my head.  In a sense I was very like child, a very serious child, sitting down to the normal business of play (my play-things were words).  The day I began The Shadow Things was a day like any other, and I kept writing it because (and this may sound a little odd) it tasted serious: I knew from the feel of it, from the taste of it, that it was going to be a complete story unlike the little shards of stories and one-shots that I will occasionally send off from the fringes of my imagination like sun-bursts off a star.  This is not to say that it did not give me trouble, or that it was not hard; I got stuck and bogged down, confused and lost as much as anyone else while writing a story.  But I wrote it anyway.

As for my busy imagination, it was not busy solely with The Shadow Things, that I will admit.  I do not have a one-track mind: my mind is more akin to the butterfly from The Last Unicorn than anything else, I suppose…  But Indi and Procyon and the secluded little world of a South Down village, the grit of a young Christian ground between pagan teeth, all kept coming out of my imagination and I dutifully continued to write it all down.

I suppose the most honest answer I can give is that I wrote The Shadow Things because it was writing itself in my head and I think I might have gone mad if I didn’t put it on paper.  And I’m so glad I did.

We're all glad you did as well! Thank you so much for sharing, Jenny.

If you would like to follow along with the Birthday Book Party, hop on over to Jenny's blog, The Penslayer for more writing-related articles and tidbits on the authorial life. If you would like to participate in a giveaway and perhaps win a copy of The Shadow Things, go here for details. And be sure to get yourself a copy of the novel! 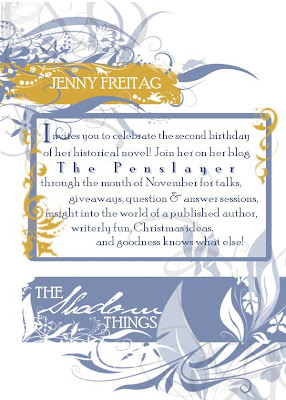 Loved the reference to The Last Unicorn! Especially since I just read it last month and remember what the butterfly was like. Sounds like an interesting book. (Yes, I read the post about book signing people who say "interesting" and no, I don't want to get away from you). :-)

I think I must have made you all paranoid with my comment on "interesting." It really only happens at book-signings. Don't let this totally ruin your life! :P

This book sounds really cool, Jenny! I think it's an awesome concept. Congratulations on the two year anniversery of your book!

Congratulations on your two year anniversary! I think it's wonderful that you have been published as a young author. We hope to read your book soon!

Yay on the anniversary!
This book sounds totally like me; I love to read about fake gods cause I get to see what other people think like on religion, but of course I only believe in one God.
This sounds SO interesting!

I participated in it; I posted about it on my blog, but I can't comment on Jennifer's blog for some reason...could someone let Jennifer know? :)

Molly: That's curious! Did you try clicking in to the direct post? I know the comment option doesn't appear unless you are actually in the post, not just scrolling down through the archives. Perhaps that will do the trick.

Interesting story. Will have to check it out. Love the blog title: Penslayer, words are like swords. very cool.

Jenny: Yes, I found the comment box and wrote out a comment, but when I tried to submit it, it disappeared. It does that for most of blogs I go to; Clara's and this blog are the only ones I can comment on...I can't even comment on my own.

Oh dear, Molly, that's not fun. I am sorry. Well, I've got your name down for the giveaway; just keep your eyes out for the giveaway announcement at the beginning of December and, if you win, we'll get in contact through email.

I read Jenny's book two years ago (yep not long after it first came out). That means I'm probably due for a reread. I thought I'd pop my head in here as I may be able to offer some advice to Molly. I have had trouble (as have some others I know) posting on blogger. In those cases the problem was a fault of Internet Explorer. Blogger is not compatible with some older (and possibly newer) versions of Internet explorer. You may need to try a different internet browser.