In October, our dear friends Kirsten and Lazaro went on an Epic European Tour . . . and while they were away, I got to babysit their fur-babies, Mya and Max. Which was totally fun, because Mya and Max were some of my very first rescue kittens, and I love to go see them all happy, beautiful, and grown-up in their loving home!

Kirsten and Lazaro asked us what they could bring back for us from Europe as a thank-you for watching over the kitties. I thought about it a little bit, but couldn't think of anything particularly fabulous. "Maybe a tea cup?" I suggested. I like collecting tea cups.

And I thought no more about it.

Well, just the other day, Kirsten and Lazaro stopped by and brought us what they picked out instead. And let me tell you, tea cups only wish they could be this awesome! 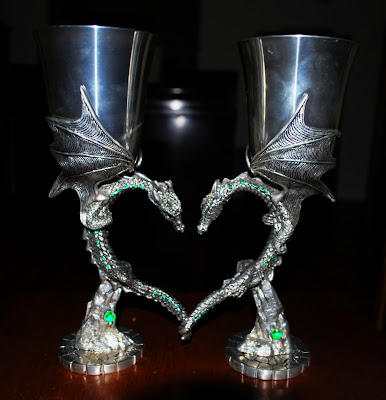 Dragon Goblets!!!
One for me, one for Rohan . . . with tails that form a heart, because it's more romantic that way!
Aren't these absolutely stunning? Look at the detail! 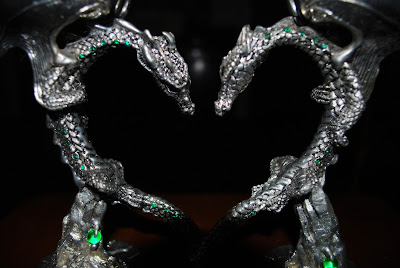 Rohan says we'll have to drink blood out of them, or something. I'm thinking possibly hot cider (I try to keep my draconian pastimes confined to the written-word).
Thank you so much, Kirsten and Lazaro, for the most fabulous gift ever! This little writer of dragon stories is utterly thrilled. And when my new writing study is finished, I'm going to put these on prominent display!
﻿
Posted by Anne Elisabeth Stengl at 8:28 AM

They look so cool, Anne! And I'm laughing at your husband's comment. You two can be the overlord and lady of the realm with those goblets :-)

Those are gorgeous! As someone with a macabre sense of things, I can see why red liquids might be required ;)

Wow! Those are incredible. The perfect gift for a writer.

That is just PERFECT for you and Rohan! Not to mention how stunning they are...I love the hints of green in them.

Wow! Those are amazing!

OH MY I WISH I HAD ONE!! I LOVE dragons (but, of course, I love everything fantasy) and they are the most gorgeous goblets I've EVER seen!

Your husband is hilarious, so you know. :D

Wassail is one of my favorite drinks (though I like my cold, I don't like it hot at all!) and it sounds so...medieval times. Ever had that?

Oooooh. Wassail would be the PERFECT drink for these goblets! Hot or cold! :)

And yes, my husband is hilarious. That's why I married him. ;)

Those are so cool! My dad would love those. He was born in the Year of the Dragon, in Chinese astrology, and my whole family loved all things dragon, fantasy, Lord of The Rings... You name it. :)

What appropriate and beautiful gifts. I like hot spiced tea with lots of cinnamon, peppermint tea or even hot chocolate with a peppermint or cinnamon stick used instead of a spoon to stir. Perfect for this time of year! God bless you.

Yes, you two are king and queen of the relm with those.

I am soooooo jealous.