So my handsome husband and I have started playing a new game.

Have any of you ever seen the cooking show Chopped? It's pretty fun. Contestants are given mystery baskets with four seemingly-random ingredients and challenged to make various dishes--appetizer, entrée, and dessert--from those ingredients. I'm not a particularly inspired cook, but I enjoy watching the show now and then.

Anyway, I saw it a few weeks ago, and I was watching these contestant chefs scrambling around in the kitchen, and I thought to myself . . . Rohan could do that!

Of the two of us, my husband is much more the inspired cook. I can cook, and I do most of the cooking in our household out of necessity, but it's not something I particularly enjoy. Rohan, however, cooks for the pure pleasure of it and almost always comes up with something amazing and creative.

So Rohan agreed to play a game with me, and I think you all might enjoy getting in on the action. Every other Sunday evening, I am giving him a list of four mystery ingredients. Then he has one week to come up with a meal featuring these four ingredients, which he presents to me the Sunday after. Not quite as crazy-intense as the timed competition featured on Chopped, but definitely entertaining in its own right!

Here are the challenges he has conquered so far . . . .

Week 1: Salmon Filet, Chard, Hoisin Sauce, and Mini KitKat Bars. (This was right after Halloween, and we had a surplus of KitKats due to a lack of trick-or-treaters.)

A pretty challenging list to start with, wouldn't you agree? And here is what he created. 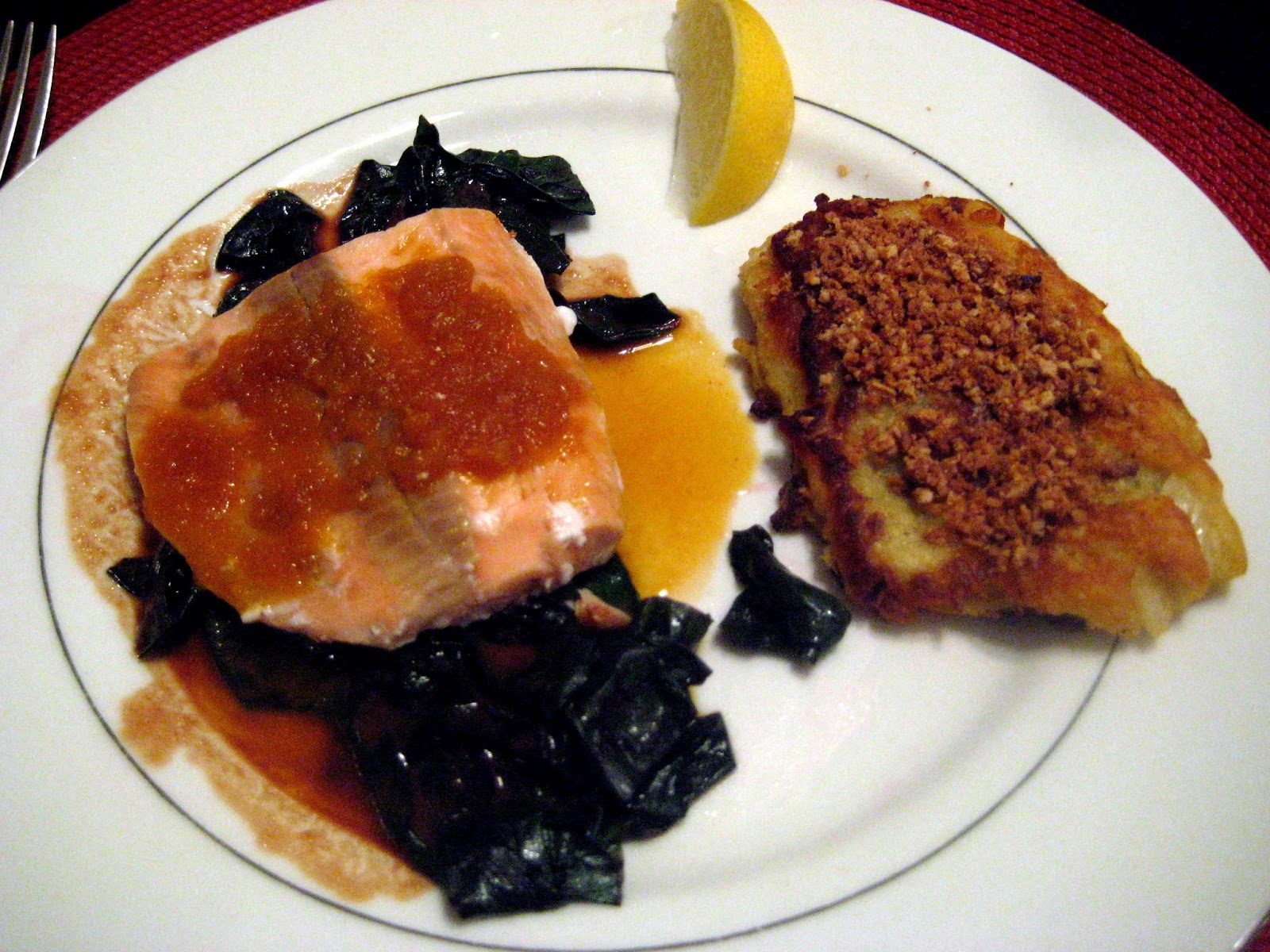 That is a steamed salmon filet served with an orange pepper hoisin sauce over a bed of sauteed chard tossed with a chocolate-orange vinaigrette. Also, a potato/chard stem pancake, crusted in KitKat wafer crumbs.

Um . . . is he not brilliant? I will say the best part of this whole dish was the potato/chard pancake, which was crispy on the outside, soft and savory on the inside. We decided that there was a little too much sweet going on, so he remade the dish the next day, cutting out all the KitKat elements. It was better then. KitKats were just a crazy ingredient to work with! But those pancakes . . . those are going to become a regular on the Drakenheath dining room table, I'm thinking.

Following this success, I gave him his next list of ingredients.

Another crazy basket! And yet again, my husband rose to the challenge, presenting me one week later with this . . . 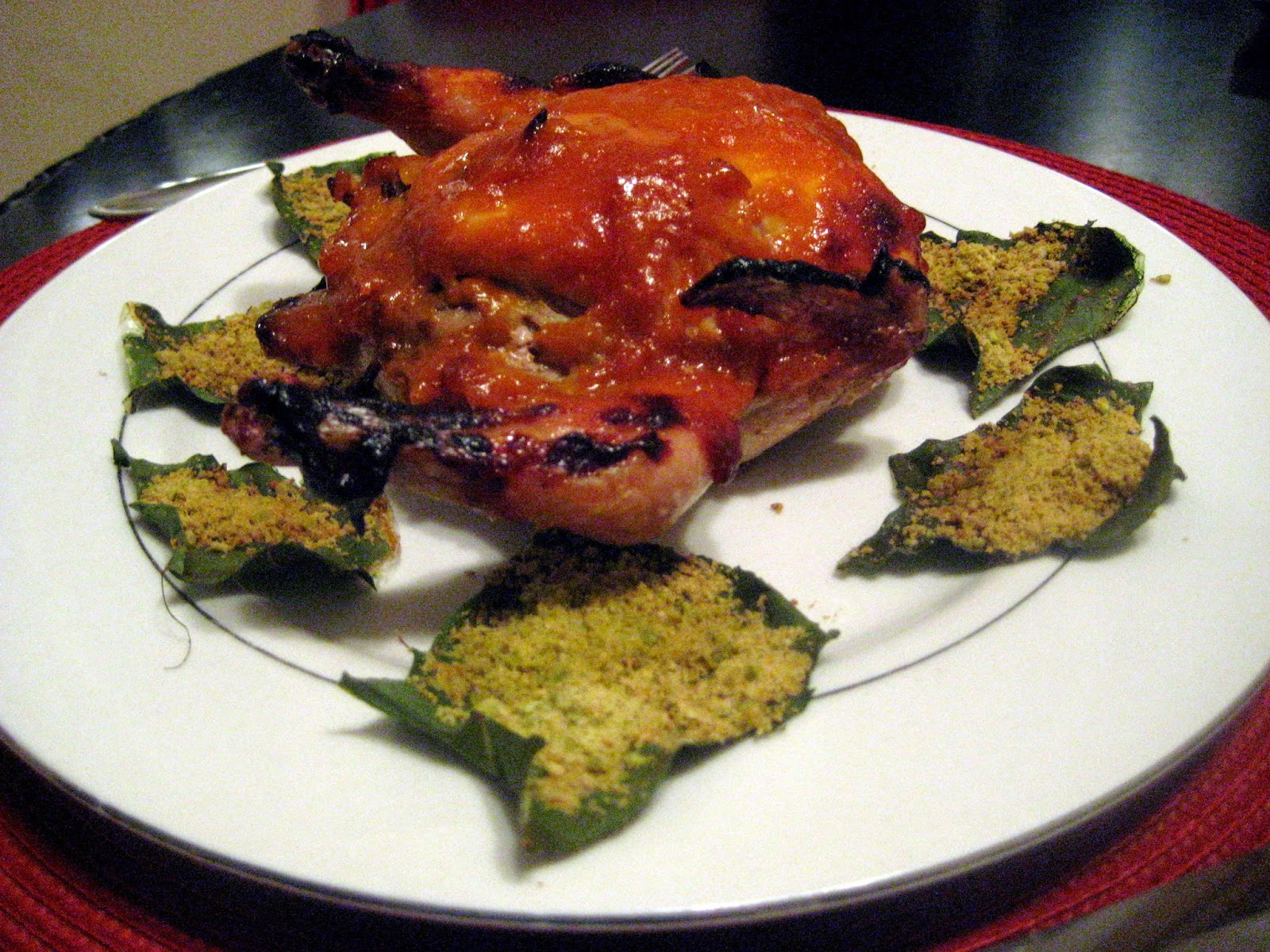 This is a roasted Cornish Game Hen stuffed with an apricot, andouille sausage, and wild rice medley, served with a sweet and tangy apricot glaze. And on the side you have collard green chips crusted with crumbed wasabi peas.

The element that looks weirdest here are those collard green chips. But I have to tell you, they were completely addicting! They had a crunch like a potato chip and the flavor of wasabi peas . . . but the roasting process cut out that crazy kick that wasabi can have, leaving just the delicious flavor behind. I would never in a million years have thought of turning the collard greens into chips! I was tremendously impressed. The apricot glaze was pretty much to die for as well.

Yes. He really is a talented cook.

This week, he's been mulling over the new list of ingredients, getting ready to make the meal over this weekend.

I am SO excited to see what he comes up with this time!

If you would like to participate in Rohan's Menu Challenge, feel free to leave ingredient ideas in the comments below, and I will use them to create each week's new challenge. Be certain they are ingredients we can readily access . . . nothing too crazy. And, if you are of a cookerly mind, you are also welcome to tackle a week's featured ingredients for yourself and let us know your results!
Posted by Anne Elisabeth Stengl at 6:00 AM

Ah, Chopped! My friends and I used to play that, only we weren't allowed to use the oven. If I remember correctly, we converted it to Iron Chef Play Dough. : D. And as a fellow resident of the country, I've never gotten a trick or treater either. This all looks delicious!

WOW. Rohan is a culinary genius. I'll...try to think of some unusual but promising ingredients. :)

Oh, how much fun! Those plates look fantastic :D I'll be thinking of ingredients to challenge Rohan with...

I love Chopped! It's amazing to me how the chefs are so creative. Sounds like Mr. Rohan needs to audition for the show! The dishes he's created so far sound delicious! I'd especially think I'd like the first one, and anything with artichokes is outstanding in my opinion.

How about chicken breasts, black beans, cilantro, prunes and avocadoes?

I love Chopped! It's such a fun show! I remember seeing one episode where the audience got to choose the ingredients. THAT was quite interesting....

YUM. Rohan is a culinary genius... How about these items: Yams, chard, sausage (any kind), and limabeans?


@Allison: HeHe, my sisters and I used to do a play-dough version also!

I watched Chopped once; it seemed like a cool show. And those dishes are making me hungry!
I'll have to try to think of some good food combinations . . . :D

Fun! And very creative. I'd be tempted to do something with you all. I LOVE to cook, unfortunately, the family isn't that into trying new things.

On a side note. We have "played" something similar. Usually it's at the end of the month and the wallet and fridge/cupboards are looking a bit bare, and we have to ask ourselves, what are we going to do with these odd ingredients/leftovers. Twice its turned out great. And one dish became a staple, the other dish, I have no idea how I made it, but it was yummy. Ha! We try not to play it too often. ;-)

Oh, I meant to add that I've made Kale Chips. Yum! Although, it's like munching on autumn leaves. First time I tried it, I couldn't stop laughing. ha! I might have to try the collard greens though. My hubby usually sautes them with onions for a Zambian dish he makes.

eToro is the most recommended forex trading platform for new and professional traders.