Here is an interesting little writing rule that isn't commonly talked about, but which is actually far more important than you might realize.

It's called the Rule of Three.

It's a rule that is commonly used in the visual arts. Trained artists know that an arrangement of three major focal points is more pleasing to the eye. Interior decorators will often arrange things in groups of three as well: two mirrors and a picture frame, or two photos and a clock.

In painting, you see this rule represented all over the place! Many Rennaissance paintings were arranged in triangular shapes, with  the points of the triangle providing the three major focual points. 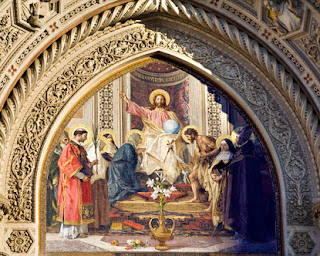 This piece is actually painted a triangular surface, making it very easy for three focal points to dominate and lead the eye. 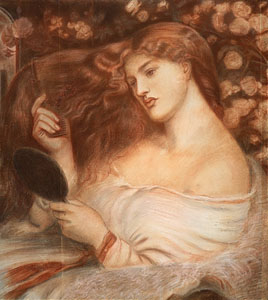 It's a little harder to spot in this painting . . . but can you see how her head, neck, shoulder, and right hand form a soft, triangular composition? Again, very pleasing to the eye.
Okay, you say, so that's painting. How does that apply to fiction?
Quite naturally! Have you ever heard of The Three Stooges? The Three Blind Mice? Three Little Pigs? Three Billygoats Gruff? Goldilocks and the Three Bears?
How about the classic maiden and two ugly stepsisters? Or the even more classic, maiden, mother, and crone?
The rule of three is everywhere in fiction! Look at the most basic structure of a story: Beginning, Middle, and End. There's a three for you all over again. For some reason things that come in sets of three are more satisfying, funnier, more effective than other numbers.
The same is true when it comes to plotting. Let me use an example from a recent rough draft of my own. In an early chapter, I had the main character recall a lullaby his mother used to sing to him. Now this lullaby contained one of the most important themes in the story, and I planned to end the narrative by repeating the lullaby on the last page.
But, especially for something as important as the very end, you can't introduce a theme and then drop it until the last page. That's where the Rule of Three becomes important. I had find at least one more place within the story to reference or even quote that lullaby. This creates a sense of pattern that is pleasing to the readerly eye, without feeling repetitious. The Rule of Three.
Now this instance was a short story. In a longer novel, you can find ways to effectively repeat and reemphasize themes more than three times. But, if you introduce and important theme, you want to bring it back at least three times.
Once--it's not a theme.
Twice--it's coincidence.
Three times--it's a theme, and the reader files it away as important.
Does this make sense to you? How might you have used the Rule of Three in your own creative work?
Posted by Anne Elisabeth Stengl at 12:28 PM

Wow, this is something that I don't usually think about while writing, though it may be a subconscious thing. In my current novel, roses are really important, both literally and symbolically. My protagonist uses roses to heal, but they also represent her relationships with others--whether it be with the world around her or the people in it. So whenever I can, I mention the roses. Though, based off this rule, I'll have to be careful not to mention them too many times!

Brilliant! It makes a lot sense, but I've never thought about like that. I have heard that when emphasizing something within a description or when teachers or preachers are emphasizing, they'll repeat it three times to help people remember. I can't say that I've used it to my knowledge, but must remedy that soon. :-)

I've never really thought about his much. But its true. And looking over some of my drawings, I saw that I followed the rule without even realizing it! In stories, I often see and use the main three storylines as Hero, Heroine, and Villain.

I'm so glad to see Friday Tidbits back, Anne!

I have never even thought about this; but now that it has been brought to my attention, I see how important it is! I'm writing this in my journal right now!

Thank you for this interesting advice. Like all the others who have commented thus far, I'd never thought about this rule before, but it does make sense. I'll have to look over some things I've recently worked on to see if I incorporated that rule. The only thing I can really remember recently is, in one of my books, the theme of self-inflicted blindness plays a major role. So, three of the characters experience something to do with blindness or having their eyes opened. These instances may either be represented in a physical or figurative sense, of course. In another work, an object that plays a symbolic role is mentioned three times.

Could it be that all of us are so drawn to the number three because of the Holy Trinity? Maybe that number is so pleasing because, deep down, we are drawn to our Creator because of it. I've read about fields of science and how many times matter is composed of three separate parts, thus showing three distinct personalities at work. For instance, apples have a peel, a juicy interior and a core. Water can either be a liquid, solid or gas. Pretty amazing if you stop and think about it long enough.

Mrs. Stengl: that story that features the lullaby is really intriguing me! Thanks for another Friday Tidbit. God bless.

Thanks for the advice, Mrs. Stengl. I've considered the concept of three before, but you put it in perspective for me, so thank you. (Another example might be in music. Many songs we think of center around two verses and a chorus which is basically another verse combining the other two.) Maybe this is also why trilogies are so popular. :)

Three is such an arc number that I sometimes find myself avoiding it for the sake of freshness. But then again, if it's inherently pleasing, why mess with a good thing??

My hero gets hurt three times. The first pushes him out of his settled (criminal) life, the second forces him to recognize the effects of his actions on others, and the third makes him see that he has friends willing to help him through.

How cool! I didn't realize that I've been subconsciously using the Rule of Three. For most books, it tends to be Hero, Heroine, Villain. For me, however, I wanted not two good characters, but three: it helped to add camaraderie to the already existing romance. In other words, I have Hero, Heroine, and Their Best Friend (Besides Each Other). The third person is a guy, but there is NO love triangle. I also have three plots going on at once--they interweave, of course. Thanks for the awesome tip! They are always so helpful.

I love your blog .This is a cool site and I wanted to post a little note to tell you, good job! Best wishes!!!
Stone Split Face

How ironic is it that many US appellate courts, especially those who issue irresponsible decisions that flount existing law, have panels of three judges? Are they giving us all a subliminal warning the don't take their work seriously?