And here, gentle readers, is the first of my newest series, in the spirit of the Tuesday's Dragon series that went over rather well last year. I write what I consider to be "new fairy tales" myself with the Goldstone Wood series, and my research for these stories often brings me in contact classic fairies of yore, creatures far more wonderful and more terrible than we can quite fathom.

And the first of these fairies I want to discuss is the most wonderful and most terrible of them all. Sprung from the imagination of William Shakespeare, I give you: 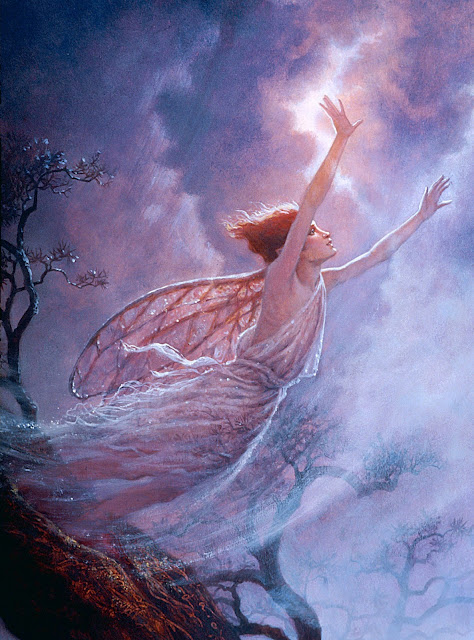 The Tempest
This magical spirit was discovered by the magician Prospero imprisoned in a tree, a "cloven pine," where the dreadful witch, Sycorax (who is dead already at the time of this story), left him. Prospero, being a magician of great power, liberated Ariel, but bound the fairy to his service ever after, tantalizing him with half-promises of future freedom . . .

Ariel is a mysterious creature, an otherworldly sprite, but imbued with human characteristics that contrast with his fairy-nature, making him altogether more bizarre and more beautiful than the various sprites and spirits that had been hitherto depicted on stage in Elizabethan England. Ariel possesses extreme elemental powers, for it he who causes the "tempest" for which the play named, wracking a sailing vessel to the point of despair for all the mariners on board . . . and yet not harming a single one of them! He puts the sailors into a deep slumber, and separates the lords who travel aboard, leading one here, another there. He moves invisible to all save Prospero's eye, serving as his master's eyes and ears.

Faithful, loyal, true, and exact is the fairy-slave Ariel. But can he ever earn the liberty he so craves?

Well, I wouldn't want to give that part away!

Ariel is set up in stark contrast to Prospero's other magical slave, Caliban, the ill-formed son of the Sycorax. Both are Prospero's slaves, but while Ariel is a creature of air and light, Caliban is a creature of dust, not a fairy, though he was born in magic. Ariel is a true servant, and while he does not love his master, he is loyal to him. Caliban, by contrast, spends his days coming up with new curses to lay upon Prospero's head!

Fairies and sprites in Shakespeare's day were seen, from a religious perspective, to be either agents of the devil or argents of God, as portrayed in the dual roles of Caliban and Ariel. The name "Ariel" may even have stemmed from the Bible passage, Isaiah 29, where the name means "Lion of the Lord," though it might also be simply a variation on the word "aerial."

Traditionally, Ariel was considered male . . . if airy sprites have a gender! Shakespeare refers to him with the male pronoun twice in the play, but come the 1600s, women took over and played the role. This would cause an interesting gender-confusion that makes sense in the context of a genderless aerial being. Come more recent history, Ariel has been played by either men or women . . . or children for that matter! 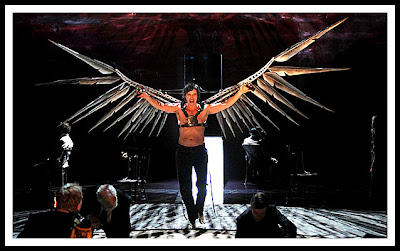 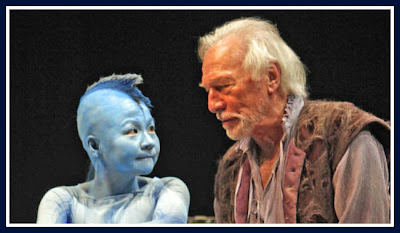 It would seem that Ariel is rather often blue . . . 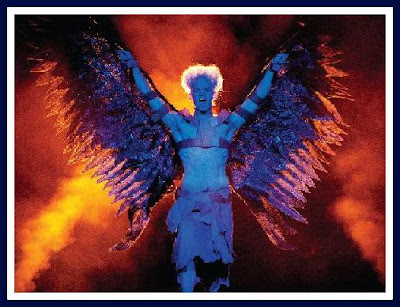 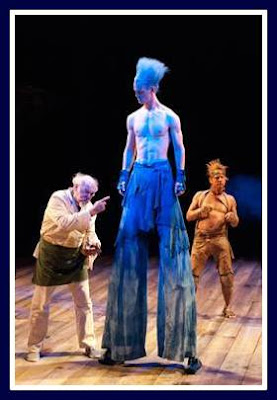 Love those stilts! And all these fascinating ways of presenting Otherness on stage. Creating a sense of an entirely spiritual being such as Prospero's servant can's be easy!

In recent history, we have seen Ariel depicted in the Julie Taymore film adaptation of The Tempest.

The trailer includes some very fine images of Ariel . . . a little too much reliance on the CGI for my taste, but pretty enough. (You can't replace stage magic with computer magic, though. Sad fact, but true.)
So there you have the first of our otherworldly beings! Read The Tempest for yourselves, I do urge you. I just reread it last week and was dazzled by the magic and the mystery once more.


I boarded the king's ship; now on the beak,
Now in the waist, the deck, in every cabin,
I flamed amazement: sometime I'd divide,
And burn in many places; on the topmast,
The yards and bowsprit, would I flame distinctly,
Then meet and join. Jove's lightnings, the precursors
O' the dreadful thunder-claps, more momentary
And sight-outrunning were not; the fire and cracks
Of sulphurous roaring the most mighty Neptune
Seem to besiege and make his bold waves tremble,
Yea, his dread trident shake.
Posted by Anne Elisabeth Stengl at 6:00 AM

I do so need to read The Tempest, but I don't have a copy kicking around my bookcase. I'll have to borrow my sister's, perhaps when I've finished Gone with the Wind. It sounds like one of Shakespeare's more beautiful works.

Is the picture at the top by Arthur Rackham? The style seems familiar. It's beautiful, whoever the artist may be.

Nope, not Rackham (though I have featured several of his paintings before). It's by some Pre-Raphaelite, but I can't recall which one at present . . .

Gone With the Wind is an excellent epic. I read it for the first time exactly a year ago and was surprised to find it much more of the American War and Peace than the romance novel I expected. Except I actually LIKED most of the main characters in War and Peace . . . :)

So I was curious at your Rackham suggestion . . . and I found this page devoted to Arthur Rackham's interpretation of THE TEMPEST.

He had such a fabulous vision of the worlds!

I just want to say I finished reading Moonblood. I really enjoyed it. =)

I also can't wait to read about more faerie folk in the "weekly fairy" series.

Ah, yes. Ariel. One of Shakespeare's (and literature's!) most fascinating character.
I usually don't like Shakespeare (not that I don't understand it. I do--with clarity. Maybe that's the problem:) but I've always loved The Tempest.
PS-I agree that CGI simply can't replace stage magic.

I love The Tempest! It's probably in my top 5 favorite Shakespeare plays, though I've never taken the trouble to sit down and make a hierarchy. It would probably shift around three times a year anyway.

There's a character in the theater novel I'm currently querying named Ariel, though he's a muse, not a fairy. 2/3 of the way through writing it, I realized that the basic plot even followed that of the Tempest, which was a pretty fun realization. Did I do it subconsciously or not? Hmmmn...LOL

Looking forward to this series!

I can never decide exactly what I think of Rackham's style of illustration. I'm always excited when I see his work, but mostly because he's one of the few illustrators I can (sometimes) recognize. His paintings have a very otherworldly look to them, which certainly fits such plays as The Tempest and A Midsummer Night's Dream.

Jenny just brought me her copy of The Tempest. I've got to finish those last two hundred pages of Gone with the Wind first, though! I haven't absolutely loved Wind, mostly due to the absolutely scream-worthy characters, but Mitchell's writing is beautiful. Her descriptions of Tara are so vivid. I can see the story's parallel with War and Peace; they're both more "social epics" than romances, I think. (As for characters, I did rather feel like slapping Natasha in W & P. She should totally have married Prince Andrew!)

Nice!! I have a whole book filled with Shakespeare plays! I really need to get to reading them! :D


I have a question! I know that your books are published by Bethany House, and I'm just wondering if you sent your story straight to them or yous sent it through one of the sites they have posted on their site... Thanks! :) Your stories sound really cool and I hope to buy them sometime!! :D

Oh, I loved Ariel! He--she--it? was my favorite character from that play. I think what stuck with me most was that image of him working and longing for his freedom. The unattainable seems to pop up in my stories every now and then since I read that.
He made me think of a more serious Puck.

Fairy series. What an awesome idea! I'd also be curious to see what you might come up with for a dragon series. :)