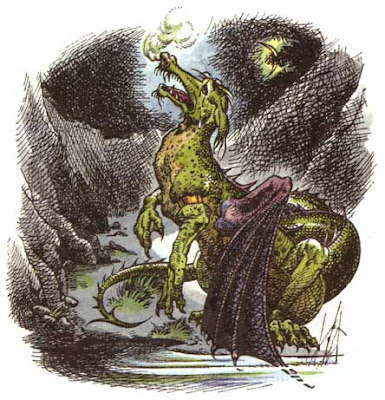 Also known by his surname: Scrubb

Here with this most distinctive dragon in children's literature, we find ourselves coming back to the themes begun with Fáfnir in old Norse Mythology: The dragon transformed by greed.

Eustace did not begin life as a dragon. In fact, he was far worse, a snotty little boy with a superior attitude toward everyone and everything. One of those people who can Never Be Wrong, and are, therefore, nearly impossible to like.

And ultimately, the only hope for someone who can Never Be Wrong is to be placed in a position where there is no possible way to argue that he is right. That's exactly what happened to poor (but completely had-it-coming) Eustace Scrubb.

On a fantastic voyage across the oceans of Narnia (as recounted in C.S. Lewis's marvelous Voyage of the Dawn Treader) Eustace and his fellow sea-voyagers come to an island that is, unbeknownst to them, inhabited by a dragon. A dying dragon, as it turns out. Eustace, who wandered away from the rest of his company, comes upon the poor beast even as it is drawing its last, struggling breaths.

He also comes upon its treasure trove.

From the way Mr. Lewis describes this dragon's hoard, it would have rated a solid 9 if not a perfect 10. Coins, rings, bracelets, diamonds, diadems, gems, cups, plates, everything a proper dragon hoard should contain, in fact. Eustace swiftly succumbs to the charm of it, slides a diamond-studded bracelet up his arm and over his elbow, and eventually falls asleep dreaming greedy thoughts of gold and wealth.

Similar, in fact, to the dreams Fáfnir the dwarf must have dreamt when he coveted the red gold of Loki. And like Fáfnir, Eustace woke from those dreams to find that his outer form had given way to the truer form that waited just beneath. The form of a ghastly, gnarled, enormous, fire-breathing dragon.

It came as something of a shock.

And sometimes a good shock is exactly what a pest like Eustace Scrubb needs. Utterly humiliated and unable to hide his shame (it's hard to hide thirty-odd foot of gnarly, scale-covered self after all), he is obliged to return to his company and let them discover for themselves what he has become.

Oddly enough, now that he is unable to feel any superiority to anyone present, Eustace finds himself for the first time in his life being liked . . . and liking in return. He undergoes a change of heart and searches out ways to help those he once despised. Though he can no longer communicate with speech, he communicates through actions, proving himself able to learn from his humiliation.

But none of this can save him from his dragon form. As Eustace begins to discover, no good deed will ever counterbalance the greed and wickedness that brought him to his hideous state. The only hope for one such as Eustace Scrubb is undeserved grace.

Which is extended to him by the great lion, Aslan.

In one of the most compelling scenes I can remember reading, Eustace tells how Aslan led him in his dragon form to a beautiful well, a fountain of bubbling, cleansing water. Before he could enter it, he must shed his dragon hide. But no matter how many times Eustace scrapes off his horrible scales, shedding layer after layer, there is always a new, terrible layer to be found underneath. He will never be clean enough to enter that well!

So Aslan must do it for him. Rending him deeply with his terrible claws, Aslan tears the dragon hide from his flesh. And Eustace by now is so desperate that, though it pains him terribly, he is ready to undergo the transformation. What a blessed relief when he is finally free of those hideous scales, when he enters the water and finds himself once more in the form of the boy he was . . .

Or rather, the boy he was always meant to be, humbler, able to think of others, with the potential for real heroism budding in his heart.

Eustace's subsequent adventures post-dragon you will have to read for yourselves in The Voyage of the Dawn Treader, however.

There are several great depictions of Eustace. The most famous, of course, is the wonderful Pauline Baynes's original illustions such as the portrait of the sobbing dragon above. David Wiesner (of Tuesday fame) also did a fun cover for one Dawn Treader edition: 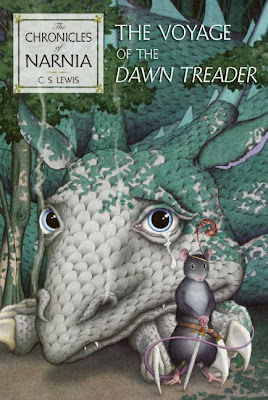 Yet another weepy dragon. I wonder if dragon tears boil?

Eustace has been portrayed on film twice. This first was this BBC production of Dawn Treader: 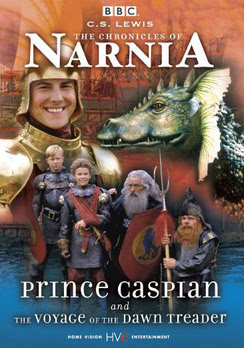 I grew up watching this one and always rather liked the dragon puppet. For a movie without CGI advantages, this one did a fine job with convincing dragons and a darn freaky sea serpent!

Earlier this year, the new Voyage of the Dawn Treader was released with plenty of fancy special effects and plenty more changes to C.S. Lewis's original storyline and intended meaning. Not my favorite movie. But the dragon Eustace was beautiful! 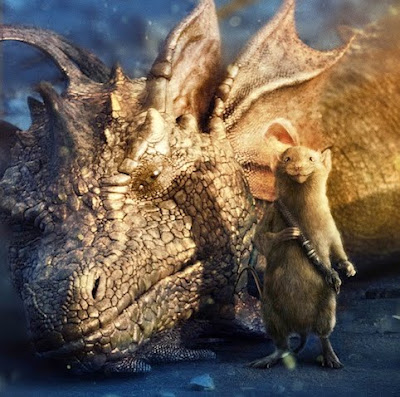 
Evil:  8
Definitely redeemable, but Eustace is a pretty sinful, messed up young fellow when his story begins. His own greed brings on his transformation, and only grace can bring him back.


Poison: 0
I don't think this dragon is poisonous. Couldn't find any references to it anyway . . .


Hoard: 9
At least a 9! While Eustace doesn't keep any of this hoard in the long run, for a little while, he is a very wealthy dragon.


Cleverness: 3
Eustace tends to think himself a bit cleverer than he actually is. But he's not clever enough to avoid dragon treasure and dragon dreams!
Posted by Anne Elisabeth Stengl at 8:18 AM

The problem with him is that he read the Wrong Sorts of books.

I think Dragon-Eustace from the BBC movie is adorable, even if he does look rather ridiculous when he flies. (Also, that sea serpent scared me as a child; I always fast-forwarded the scene.)

The Voyage of the 'Dawn Treader' has always been my favorite of the Chronicles, primarily because of the scene in which Eustace is transformed back to his boy-state. That's such a powerful part of the story. I am glad that neither movie attempted to do it just the way it was in the book, and I felt that the BBC film still captured the power of the moment. The new movie...not so much.

Christa here!
Voyage of the "Dawn Treader" is one of my favorite Narnia books, and that scene with Eustace and Aslan, for me, is one of the most powerful scenes in all of literature.

I was NOT happy with the movie...they changed it waaaayy too much:( But I did love Eustace in it, and I didn't think they could have done him better!

Don't get me started on the Narnia films. But the book's description of his un-dragoning is the best, hands down. And also the comment about "Eustace, not having read the right sorts of books, had no idea how to tell a story properly."

The part in the book where Aslan had to help Eustace shed his scaly skin is an allegory to real life: We ourselves, in our own power, can't rid ourselves of our sinful nature-We need God to help us. Its the only way we can change and become like Jesus.

I love the way they did eustace as a dragon in the new movie. That is one of the reasons that I love that movie so much. The book and the old movie scared me so much when I was little, but the part I was scared of doesn't scare me in the new movie. The serpent is definatly scary though. It gets my little sister everytime! If you see any beautiful dragon pictures, please post them!
http://need2read9.blogspot.com/