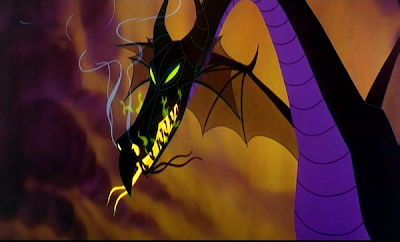 Also known as: The Mistress of All Evil

I debated for a while who should receive the honor of final dragon in my Tuesday's Dragon series. But when it came right down to it, I really couldn't see myself writing about any dragon other than the magnificent Maleficent, antagonist of my favorite Disney film, Sleeping Beauty.

There simply is no more majestic or terrible dragon.

Yes, I know she's a film dragon and not a literary dragon, so perhaps she shouldn't qualify. But, as you will see in my article, she has all the pathos and significance of any dragon from Tiamat on!

Maleficent of the film is an evil fairy, the character molded from the evil fairy in the classic Little Briar Rose tale by the Brothers Grimm. Maleficent undergoes significantly more development than the original fairy. Her powers are greater, and she sequesters herself away from all others fairies in a remote castle full of goblins and dark things. She carries a staff with a glowing orb, teleports herself in clouds of black smoke, and rides upon lightning bolts. She is a fabulous villainous, a potent evil if there ever was one.

She is also a shape-shifter. She can take on the form of a hypnotic green light, like a will-o'-the-wisp, leading the unwary astray. But most famously, she assumes the guise of a truly enormous, monstrous, black dragon.

One thing I love about Maleficent is that she is entirely without comedic campiness, unlike most other Disney villains. The story of Sleeping Beauty has more than enough light comedy from the perspective of the three good fairies who work so hard to guard and protect lovely Briar Rose. But Maleficent is so evil, so completely given over to her own power and pride, that she no longer possesses a sense of humor--save in that terrible moment when she reveals her dragon nature to the brave Prince Philip. The look of pure horror on his face delights and amuses her and she laughs a terrible, heat-filled laugh.

Her complete possession of dignity and majesty is part of what makes Maleficent a truly magnificent villain beyond all other villains. Her anger is like an elemental storm, full of lightning and sick green fire. And in her final furnace-fueled fury, she explodes into the form of a dragon, and we cannot help but wonder if this, this is her true shape after all! 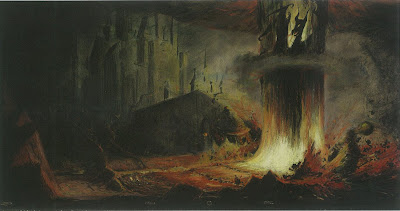 Painting for the film done by the amazing Eyvind Earle
One of the things I appreciate the most about Maleficent, and the Sleeping Beauty movie, for that matter, is this lack of silliness or camp in the development of the character. The makers of this film and story understood and respected children, I feel. As I child, I loved and enjoyed the funny moments of the good fairies trying to sew and cook and clean (to varied degrees of success) without magic. But when the time came for the prince to fight the dragon . . . no. This was not a time for laughs. This was a serious business, good vs. evil. This was epic and this was important. And beautiful. A great and terrible contrast was being played before my eyes, and any silliness involving Maleficent earlier on would have taken away from the intensity of what was being  communicated.
The towering power of evil. The green, venomous fire and smoke. All pitted against one small prince, armed only with a shining sword.

Do you readers of Heartless see an influence on my own work? An influence that began from the time I was a tiny child, watching this terrible scene of evil's power vanquished by a lone, brave man armed only with the "shield of faith" and the "sword of truth." There was strong allegory at work in this film which, yes, movie-makers today would roll their eyes at. But I didn't as a child, and I don't now.
Artist Eric Cleworth animated the dragon for the film. He based her movements off of a rattlesnake, sinuous muscles moving a powerful body over a rocky terrain. The enormous, awe-inspiring sound of her flaming was taken from an actual US Army flamethrower. She is the only truly awful dragon seen in an animated Disney feature. (The witch-queen/dragon in the film Enchanted only want to be as amazing as Maleficent). 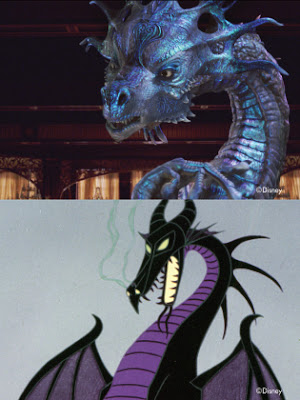 She has been brought to dreadful life via the Disney World animatron Maleficent: 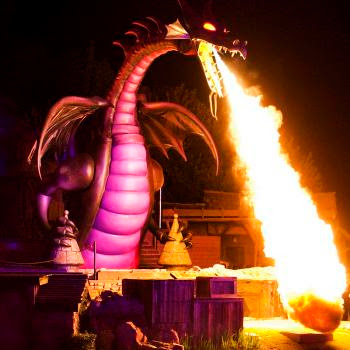 Now that must be a sight worth seeing in person! Have any of you seen this? I wish I could!

What I have seen in the dragon lurking beneath Sleeping Beauty's castle at Eurodisney, France. I don't know if this dragon was meant to be Maleficent or not. But it was, far and away my favorite part of the whole Eurodisney experience! 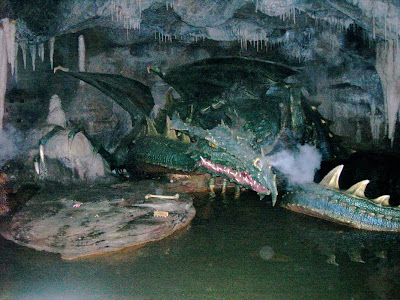 Smoke billowed from her nostrils. She turned her head and roared. She watched you with evil eyes, and you could see the bones of her victims beneath her snout. And, worst of all, the great chain binding her to the stone was broken. She hadn't noticed it yet . . . but how long? How long?
Loved it.

Maleficent has also been featured in the famous video game series, Kingdom Hearts, in which she plays a major antagonist's role. 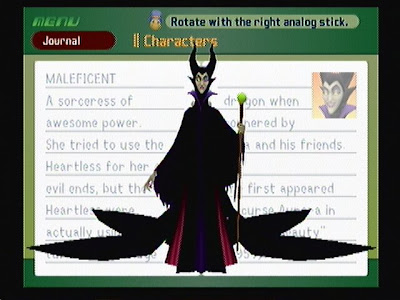 A live-action film titled Maleficent staring Angelina Jolie is rumored to be in the works. This will be a retelling of Sleeping Beauty from the perspective of Maleficent.

Not sure how I feel about this. A sympathetic Mistress of All Evil is simply not as wonderful or interesting to me. But I'll be curious to see it in any case. Tim Burton was rumored to be set as the director, but it sounds like he's going to back out, leaving a directorial slot available to some hopeful.

Most recently, Maleficent has found her way into TV land via the ABC series, Once Upon a Time. Kristin Bauer plays her:

This does not impress me.

Where is the dignity or majesty? In the short clip I saw a few weeks ago of Maleficent's big scene, the actress played up the camp, and the script was as sad as it could be. The TV show might be wonderful (I hear people telling me all the time that I would love it), but if they can't handle their villains with appropriate dignity, what can they handle? I mean, she has a small black unicorn for a pet rather than her terrify trademark crow! I mean, really . . . a small black unicorn?

Yet again, I must ask: How are the mighty fallen?

This in no way damages the awe of the original Maleficent for me, though. She will live on in my imagination as the pinnacle of dragonishness and the great inspiration of all who aspire to write sinister dragons into their fairy tales! 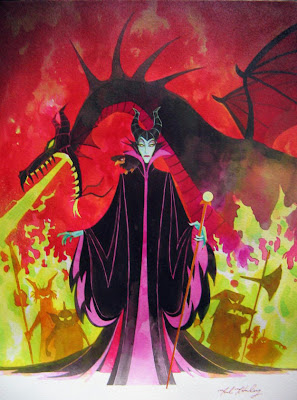 Evil:  10
The Mistress of All Evil rates a perfect score here, of course.

Scariness: 10
Terrifying! Marvelously so! She frightened me to the point of flee-to-grandma's-arms panic when I was little, and I have loved her for it ever since.

Poison: 8
Look at the green in her flames. How can that be anything but poisonous?

Hoard: 0
She lives in a dark and dreary castle in the farthest remote of remote farthests. No sign of any treasure or even a tapestry or two to lighten the mood.

Cleverness: 7
Can't give her much more than that. I mean, her vengeful curse on the princess was pretty diabolic. And she did carefully plan to kidnap Prince Philip to prevent him from thwarting her scheme . . . but, being the dreadful villainess that she is, she let villainy get in the way of practicality. Wanting to draw out Philip's torment, she didn't kill him right away, but merely locked him in her dungeon.

Let that be a lesson to all you villains out there. Kill them right away. Otherwise, they will escape and slay you. Trust me. It will happen.

Anyway, ladies and gentlemen, we have come to the final Tuesday of 2011, and this is the last of my Tuesday's Dragons. It's been a lot of fun! I've enjoyed all the research and hope you have enjoyed reading what I've learned. Happy reading and dragon-slaying!
Posted by Anne Elisabeth Stengl at 6:00 AM

Apart from Maleficent, what did you think of Once Upon a Time?
Also, I read Veiled Rose recently--it's absolutely beautiful, twisting my heart in so many places.

Aw. I'm sad Teusday's Dragons is over.
We started once Upon a Time, but quit watching it after a few episodes. I'm almost done with Veiled Rose. I don't know how you come up with such amazing stories...I love J.R.R. Tolkien and C.S.Lewis...but, I would have to say that you are a better writer. I'm not just saying that. Really. :)

You should do Saphira from 'Eragon' for your final dragon. I know the year is almost up, but she is an awesome dragon. I have a great quite about her that you can put on the post.

I've been wanting to read Eragon, but can't find a copy at my library. Well, at least they are never there whenever I look for them. :) Maleficent is indeed one of the scariest dragons there is. I was waiting for you to post her on here, and voila! I read a story rewrite of Sleeping Beauty once where Maleficent was once human, but enthralled by the power she found in the "forbidden arts". Kind of interesting, don't you think?

@Galadriel: I actually haven't seen it! I keep hearing that I would LOVE it, but I'm not quite convinced. Retold fairy tales are either something I really love or really hate, depending on how they're handled. Will probably give it a try someday when I'm no longer on deadline. Have you seen it?

@Clara: You're so sweet to say that! Tolkien and Lewis are two of my all-time favorites, so that is quite the honor. :)

@need2read: I actually haven't read Eragon to write up a post on Saphira. I think I'm ready to move on to a different series now anyway. Maybe I'll do another dragon series someday.

I agree that Maleficent was the most terrifying Disney villain of all time. The scene with the goblins all dancing around the fire still disturbs me to this day.

I'm really starting to enjoy "Once Upon a Time" but it's still wobbling on its legs like a newborn colt. I wouldn't assure anyone else that they would "love it" at this point. I strongly feel like they're trying too hard to push the Disney interpretations of fairy tales into their mythology, which sometimes comes off stilted and super hackneyed. Maleficent's cameo is a perfect example. I also think that young children could do with an extra clue that, as much of a part of our lives its interpretations have been, Disney did not invent fairy tales.

I finally picked up a copy of "Veiled Rose" before the holidays! Haven't gotten around to reading it yet, though, so I'll be avoiding the A-Z blog until I do.