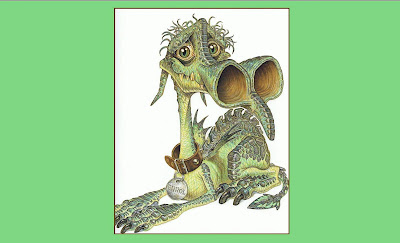 Also known as: Goodboy Bindle Featherstone of Quirm
Errol is . . . not a Noble Dragon.
In the wide, weird, wonderful world of Terry Pratchett's Discworld, there are many dragons. Alas, most of them are rather pathetic excuses for dragonhood, and poor, dear, teary-eyed Errol is the most pathetic of all. Where the Noble Dragons are arrogant, powerful, graceful, winged monsters of majesty, Errol is a bit of a mess. 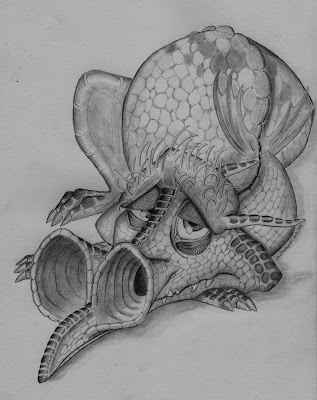 But a very sweet mess, as you can see!
When we first meet him in my personal favorite Discworld novel, Guards! Guards!, Errol belongs to Lady Sybil Ramkin, founder of the Sunshine Sanctuary for Sick Dragons. Dragons, you see, are a popular pet among the upper crust in Ank-Morkpork city. Not the big Noble Dragons, of course. No, we're talking about their humbler cousins, the Swamp Dragons. Which, alas, are almost permanently sick. You see, they have the ability to rearrange their internal organs so that they can attempt to digest whatever food they take it into their heads to eat (basically, anything that's combustible). But it's a difficult biological process, and as a result, the poor dragons find themselves constantly ill.
Which means a lot of the poor things get abandoned when their owners find them too difficult to care for. So, they end up living coming to the Sunshine Sanctuary where their diets can be properly monitored. And thus was the case for poor Errol.
That is Goodboy Bindle Featherstone of Quirm that was. But fancy breeding and registration has not spared the unfortunate fellow from those ailments common to dragons. If anything, he was worse off than the rest of them because he was no ordinary swamp dragon! In fact, Lady Sybil, had never met a dragon quite like him . . . and declared him "a complete whittle," truth be told!
This did not stop Captain Vimes of the night watch from taking an interest. He brought him home to the guard house. For once in his life, poor Errol finds himself loved and accepted by those outcasts and misfits of society, the night watchmen! 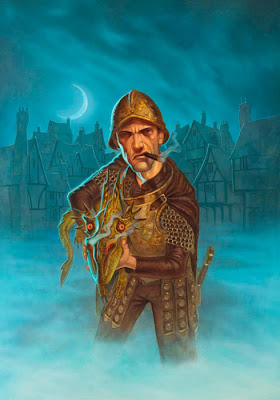 But there is more to Errol than meets the eye! When need arises and a Noble Dragon threatens his beloved Lady Sibyl (virgin sacrifices are, after all, to be expected when a Noble Dragon comes to town), he reorganizes his own digestive system . . . into a supersonic jet engine! 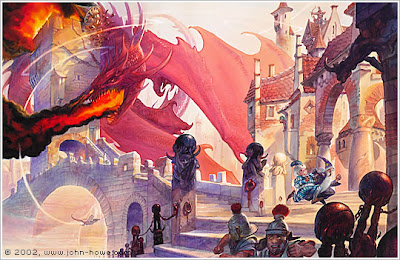 Can you spot Errol in this picture?
But, if you want to see how that battle goes down, you'll have to read the brilliance that is Guards! Guards! for yourself.
In the meanwhile, be mindful those poor unfortunate creatures abandoned to sanctuaries and shelters who might just need a little love in their lives to make all the difference! Mightn't there be a shelter out there someplace where your Errol awaits? 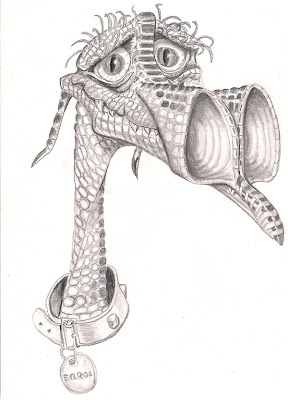 
Evil:  0
No wickedness to be found in this sweet little mess of dragonishness.


Scariness: 3
Other than the fear that he might a) eat your fire irons or b) spontaneously combust, he's not a particularly frightening little guy.


Hoard: 0
No hoard. This poor fellow doesn't have much of anything save a need for understanding, a scratch under the chin and . . . well, maybe some more fire irons.


Cleverness: 5
Errol isn't exactly what you'd call a brain . . . but he may just have what it takes to save the day!

Aw, what a sweetie! I think I'll request one for Christmas. At least, if Swamp Dragons are out of the question, I may have to buy Guards! Guards! and see what all the hullabaloo is about. Does the series have to be read in order? I see Guards! Guards! is technically number eight.

Actually, the series is made up of several sub-series, and GUARDS! GUARDS! happens to be the first of my favorite sub-series in the Discworld. It is, in my opinion, the perfect place to start your Discworld adventure!

Christa here!
Awwww, Errol is so pathetically cute! I first heard of Discworld when I saw the movie "The Color of Magic." Haven't got any of the books, though.

Can I have one? I promise I'll keep him from eating the sofa.