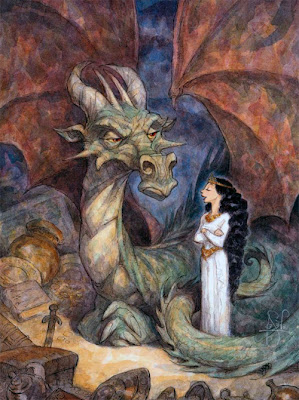 Also known as: The King of the Dragons

Kazul, a dragon of the Mountains of Morning, is quite a remarkable lady. Especially considering that she is the king of the dragons.

To most of us, this might seem a bit unusual. But to the dragons who live in the world of The Enchanted Forest Chronicles, as created by Patricia C. Wrede, it makes perfect sense for a lady dragon to be king. After all, the office of King is just that . . . an office.

And besides, no one wants to be Queen. That's a boring job!

Kazul is remarkable for other reasons besides her rule. She's a doting grandmother, of one thing. She's also a fair and open-minded sort, willing to give folks a chance to prove themselves. For instance, when a discontented princess named Cimorene traveled all the way from her kingdom of Linderwall to the Mountains of Morning and asked to become a Dragon's Princess, some of the other dragons wanted to eat her. After all, no proper princess would come offering herself to a dragon! And if she's not proper, what good is she?

But Kazul decides to give Cimorene a try. After all, Cimorene is a decent baker and scholar.

"I like cherries jubilee," says Kazul, when the other dragons question her decision. "And I like the look of her. Besides, the Latin scrolls in my library need cataloguing, and if I can't find someone who knows a little of the language, I'll have to do it myself" (p. 19).

Yet another way in which Kazul is unusual. Who ever heard of a dragon with a library? Oh, she has a proper hoard too, complete with magic rings and suits of armor and even geni-filled bottles (don’t open those!). But a library?

A literary dragon is exactly suited to Princess Cimorene's tastes . . . and Cimorene's cherries jubilee is suited to Kazul's. So they make a fine pair, the two of them and eventually become friends.

Not that Cimorene ever becomes too comfortable with Kazul. After all, even a friendly dragon is a dragon and must be treated with utmost respect! And there's always the fire to be considered. A wise princess must take every precaution, including researching an anti-fire spell to protect herself . . .

It turns out to be a good thing Cimorene took the time for this spell. Dragon-sneezes are, well, nothing to sneeze at! And when Kazul gets a whiff of some deadly dragonsbane--just a whiff, mind you--she is plummeted into a violent illness, complete with sneezing attack, that would have incinerated Cimorene in a moment without that protective spell!

That sickness is almost enough to setback Kazul's future as the king of the dragons. For just when she falls down ill, word comes that the current king has been poisoned with a heavy dose of dragonsbane in his coffee. A new king must be selected! And Kazul, sick or not, is determined not to miss out on her chance.

But I hate to give away plot points. So you should read Dealing with Dragons and the subsequent Enchanted Forest Chronicles to learn more about Kazul on the dragon who live in the Mountains of Morning.

Kazul has found her way into several fun artistic interpretations. The Enchanted Forest Chronicles have been popular enough to merit several reprintings, which mean lots of covers! This one is my personal favorite (and the cover on the copy I own): 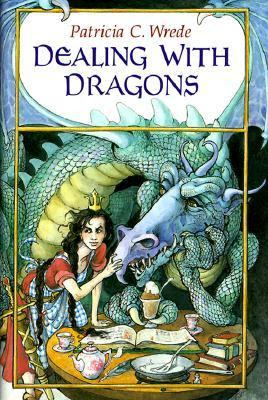 You may recognize the style of the brilliant Trina Schart Hyman, my all-time favorite illustrator (of St. George and the Dragon fame). I love her intelligent, possibly a little grumpy, but benevolent depiction of Kazul with her claws curved lovingly around a serving of chocolate mousse (Cimorene's other cookerly talent). 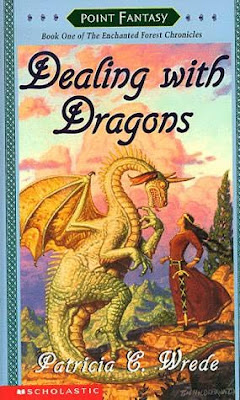 I don't think that's meant to be Kazul. Looks a little too perplexed. Maybe it's Woraug, the evil dragon with designs on the throne who becomes Cimorene's nemesis?﻿
And the image seen above but in cover format: 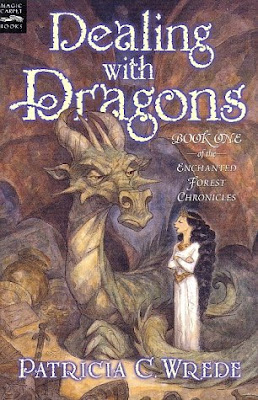 And here's a cover for a four-in-one anthology: 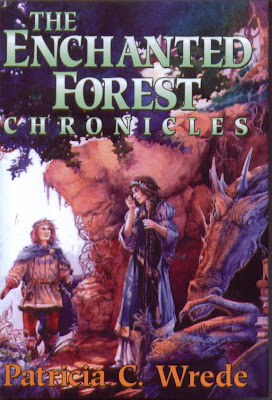 That one has my vote for the scariest depiction of Kazul.

Dealing with Dragons has even been translated into Hebrew! Check out this fun cover: 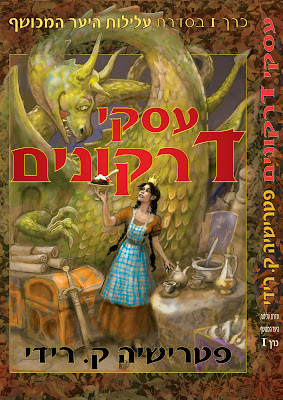 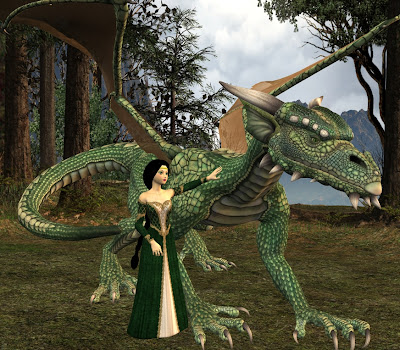 A little video-game-y, but fun!Kazul on a scale of 1-10
Evil:  0
Kazul is a dignified, but good dragon. Treat her with proper respect, and you'll be fine.

Scariness: 7
Not scary to her friends . . . but dishonest wizards and foolish heroes had better watch out!

Hoard: 10
She gets a 10 because not only does she have all the classic jewels and gems (rooms of them!), she also has a library. Enough said.

Cleverness: 9
Kazul is a very clever and intelligent king.

My friends told me about Dealing With Dragons. They said I would love it, but I haven't read it yet! I'll have to read it now. Anything with dragons I will most likely love;)

My blog has quite a few books with dragons. You should check it out:
http://need2read9.blogspot.com/

I love the one with the "scariest" Kazul. could you please tell me who the illustrator is, if you know? I'd love to see the other covers.