This is the sort of conversation that goes on at a wonderful event known as Comicon. In fact, this is a conversation I had while passing by the world's tiniest (and possibly most adorable) batman ever, who grinned eagerly up at me and knew at once what I was.

It's nice to be recognized now and then.

I thought you might all enjoy some pictures of how Comicon went for me and Rohan! As some of you saw in my Doings at Rooglewood post, poor Rohan was very sick over the weekend. But, being the magnificent trooper he is, he still drove me out to Durham on Friday night, carried in all the heavy boxes of books, helped me set up and arrange the table, nearly passed out for lack of breath, grinned, and carried on. He was so exhausted after that, we had a bit of trouble getting out the door on Saturday morning and thus were a few minutes late for the start of Comicon.

That, my friends, is a hallway jam-packed with fans. Geeks, nerds, whatever you want to call them, they are devoted fans. So many costumes. So many genres and stories and universes I had never before heard of. SO MANY DOCTOR WHOS. (Seriously, I should have kept a tally . . . because there were more Doctor Whos of various incarnations than any other iconic figure there!)

The first day we dressed like Ordinary People. Which was dull.


After a full day of watching costume after costume parade by our table, we decided that, sickness aside, we could not bear to sit in dullness a second day. So on day two we came as:
﻿
We got asked several times who our characters were. Sadly we weren't anyone in particular . . . these were just the best costumes we had on hand. So next year, should we go back, we've vowed to be more specific in our costuming. Maybe Lionheart and Rose Red . . .

Here's another photo stolen (borrowed!) from my friend, Stephanie. Here you can see the full table display: 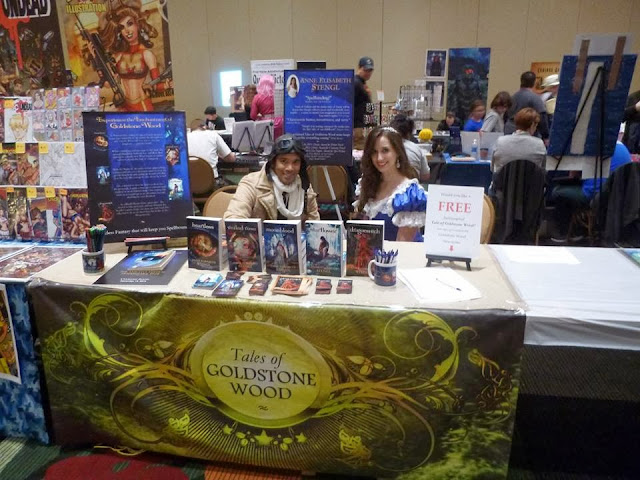 I'm very pleased with how it turned out! Lots of books, lots of dimension. Definitely eye-catching enough to get a number of folks to stop, talk about the series, take a book, and sign up for the newsletter.

I even had the fun of one fan, a young teenage boy, who took a book on day 1, coming back the next day to tell me that he'd read Dragonwitch all in one night, loved it, and needed Starflower right away. That was sweet.

Oh, so you know my friend Stephanie I mentioned up above . . . 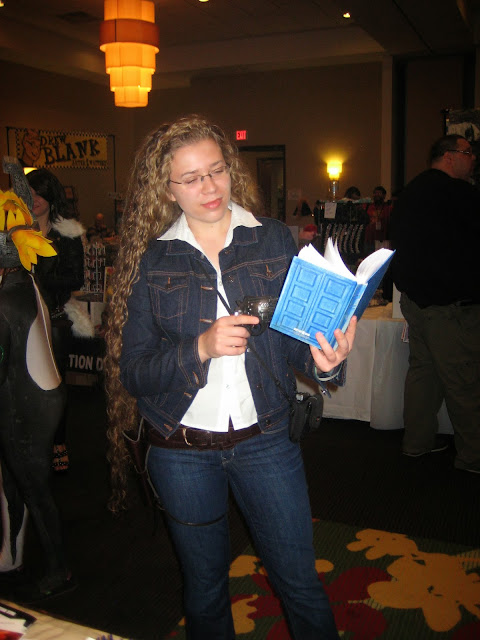 She, as Dr. River Song, didn't have much time to chat, since she had about 500 different Doctors to match diaries with . . . . Not to mention an honest-to-goodness Dalek rolling around in need of watching! 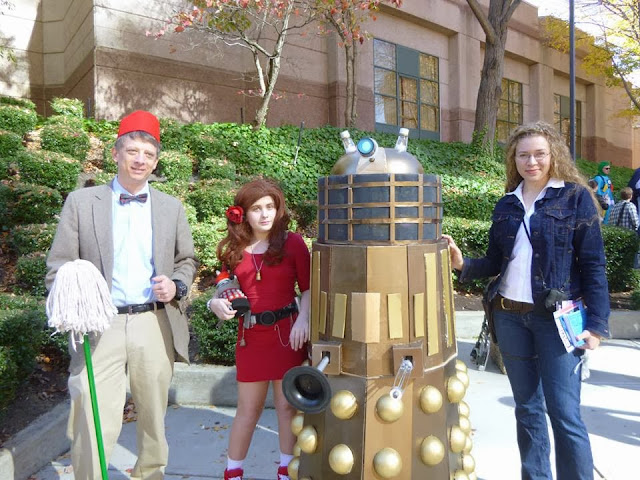 This was one of seriously dozens of Doctors I glimpsed that day. There were short doctors, tall doctors, old doctors, really young doctors. Doctors from every incarnation (maybe not every, but a lot of them, anyway!) of Doctor there has ever been! There were bunches of River Songs too, but Stephanie's was by far the best, I thought.

There was a Zoe and Kaylee, for you Firefly fans out there . . . 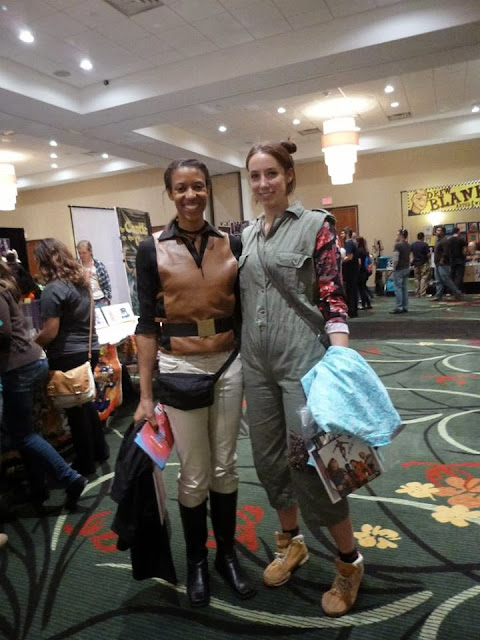 And quite a creditable Thor in the company of a . . . female Loki? Okay. Great costumes, though! 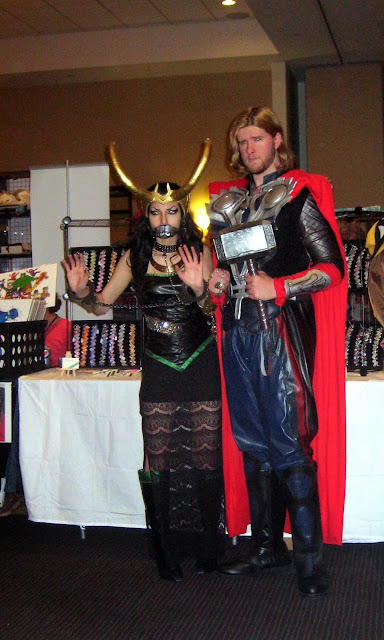 Though my favorite might have been this crocheted Cthulhu . . .

I seriously could have spent all my time snapping photos of costumes, many of which I didn't even recognize! Perhaps I'm not as up-to-date on my nerd culture as I thought. Might have to work on that.

I hope you enjoyed this tiny taste of NC Comcon! We enjoyed it. Even Rohan, who was feeling much better by the second day and whose Aviator costume was greatly admired by all and sundry.

And maybe someday there'll be a book called The Aviator and the Princess, and everyone will recognize us immediately.
Posted by Anne Elisabeth Stengl at 4:59 PM

Thanks for the shout-out, AE! :D It was lovely seeing you and Rohan at the con.

That looks like so much fun! I hope to make it to a con someday (and if I can get my hubby to go along, all the better *grin*)

OOOOOOooooooo! This is so much fun! How fun to be surrounded by so much nerdiness! Thank you so much for sharing! Love, love, love!

Still working my way through HEARTLESS and loving it! I actually witnessed the zealous teen, and it's true - he was indeed an instant fan. See you again next year? We'll be on the lookout for Rose Red.

So cool! I totally wanted to go. But I think I'd be intimidated, so I'd need to go with my fellow nerdy-friends... and first I'd need a good costume...

You totally could have told people you were Una! That's the sort of dress I kind of picture her in towards the beginning of the book!

I look forward to reading your "The Aviator and the Princess" children's book someday! :)

Oh. My. Pumpernickel. That looks like so much fun. I love your costumes!

Wow. That looks awesome.
You and Rohan looked really good.
Lots of Doctor Who characters. Thumbs up to your friend Stephanie. She looks great as River Song. :)

Awesome! Thanks for sharing! I hope to go to a con someday, but I do not want to go alone. Ha! We shall see.

haaaaaaaaa...I've want to cosplay River since my first episode with here. Though matches diaries with so many Doctors would be absolutely exhausting. And I have a 4th Doctor scarf now. Homemade.
Speaking of Doctor Who, ave you seen the Night of the Doctor minisode? So explosive!

LOL!!! How much FUN y'all had! Stephanie looked the perfect River Song, and the Dalek was hilarious. I'm glad you two had a great time!

I'm so thrilled you had such a wonderful time and that Rohan is doing much better! What a wonderful place to connect with fellow fantasy lovers. I loved hearing about the boy who read Dragonwitch in one night and came back for Starflower.

Rohan could have said he was the prince from the French novel, The Little Prince. That prince was an aviator.

God bless and have a fantastic weekend.

I read the Goddess Thithe last night! It is reaaaaaaaaaaaaaalllllllllyyyyyyyy good! The deal was still up in Australia!BEST THING EVER!
Jemma

Aww I can't comment on your other blog pages:( can you add anonymass onto them?:)
Jemma

Wow! This is so neat! There is a film called The Princess and the Pilot but it had sad ending and I look forward to seeing your story!