I read a lot of old stuff, and I spend probably far too much time rereading favorites. But new books don't often fall under my readerly eye . . .

That being said, I do see new stuff coming along here and there, and I do hear great things about them. So I thought I'd take a moment to alert you, my dear readers, to some of the works emerging in CBA fantasy these days that I keep hearing buzz about. 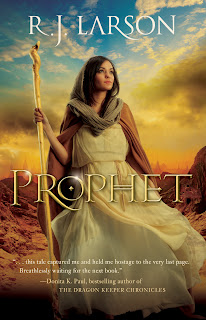 First is from my own publisher, Bethany House. R. J. Larson just released the first in her series, The Books of the Infinite. Isn't it pretty?

Ms. Larson puts a whole new spin on the fantasy genre by setting her novel, Prophet,in an ancient world with a feel of Biblical times. It's a romantic adventure story with exciting world-building and plenty of inventive twists along the way. A close friend of mine read it and thoroughly enjoyed it ("Couldn't put it down," being the key phrase here.)

The second book in this new series, Judge, is due to release around the same time as Starflower. So you might want to hurry up and get your copies of Prophet soon so you can be caught up!

The next fantasy novel that I am excited to highlight for you is another Bethany House book. Isn't it great that Bethany House is branching more and more into the Visionary and Speculative genre? This new book is by debut author Patrick W. Carr, and it sounds VERY exciting, though perhaps for an older audience than YA. Here's the description I've found. 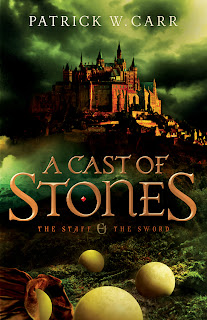 In the backwater village of Callowford, Errol Stone's search for a drink is interrupted by a church messenger who arrives with urgent missives for the hermit priest in the hills. Desperate for coin, Errol volunteers to deliver them but soon finds himself hunted by deadly assassins. Forced to flee with the priest and a small band of travelers, Errol soon learns he's joined a quest that could change the fate of his kingdom.

Protected for millennia by the heirs of the first king, the kingdom's dynasty is near an end and a new king must be selected. As tension and danger mount, Errol must leave behind his drunkenness and grief, learn to fight, and come to know his God in order to survive a journey to discover his destiny.


Show More
First of all, I'm a fan of the names. They set a great fantasy feel without being oddly made-up and hard to pronounce. I love a fantasy grounded in a sense of realism. Second, what's not to love in a flawed hero? Third, assassins . . . fourth, heirs of kingdoms . . . fifth, a play on words in the title (A Cast of Stones . . . and the hero's name is Errol Stone). One thing after another to catch our interest here! So watch for this book coming in February. 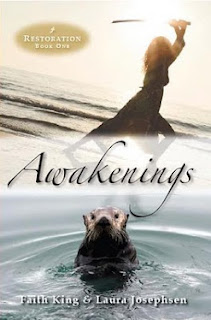 Last, but not least, is a novel that has actually been available for a while, but which you might not have heard of yet. It is the first book in the Restoration Series which was initially being published by OakTara . . . though, through recent internet sleuthing, I've learned that the authors have decided to leave OakTara and pursue new avenues for the rest of the series. Still, Awakenings is in print through the end of the year, so you should go get yourselves copies while you can!

This is another one that I have not read, but a close friend read it and enjoyed it immensely. Especially, she said, the flawed heroine, Anathriel, cold, ambitious, and intriguing.

Anyway, I am certainly not a great source for the latest and greatest going on in my genre. But I thought you might be interested to hear about these three novels! Let me know if you get a chance to read them and what you think.

Show Less
Posted by Anne Elisabeth Stengl at 6:00 AM

Waking up and seeing this recommendation for Awakenings really made my morning! Thank you!

I'm almost as excited by the other two recs as well. They look like fabulous reads, and I can't wait to check them out!

I agree. The arena for speculative fiction in Christian publishing has really widened out in the past five years or so, much more than when Laura and I were first trying to attract interest for our series, due in large part to contributions like your Goldstone series and Donita Paul's dragon series. Because of this, I have (I believe) reasonably optimistic hopes for our series' future.

Fantastic. I'll try to look them up in the library or something.
Awakenings and A Cast of Stones looks the most interesting, and I am like you, I don't often go around reading new books, I usually prefer old books.
Can't wait! :)

A cAst of Stones looks amazing. The books I'm looking forward to this year are The Tide of Unmaking by Wayne Thomas Batson, Dark Sea Annals bk. 3 (also Batson), The Mark of Athena by Rick riordan, Starflower by you know who :D

This sound good!
I will have to look for thema t the Library:)

Thank you! I'm always looking for new books to read! These sound great!

I just bought 'Prophet' a couple of weeks ago and I'm really looking forward to reading it.