My dear readers, I have finally managed to produce another Weekly Fairy write-up for you! Do forgive me if you don't see one again next Tuesday, however. My husband and I are leaving this weekend for Orlando, the ICRS conference, and the Christy Awards Banquet! We're really looking forward to it, and I promise to take lots of pictures of the glamorous evening to share with all of you.

In the meanwhile, I hope you will enjoy reading about . . . 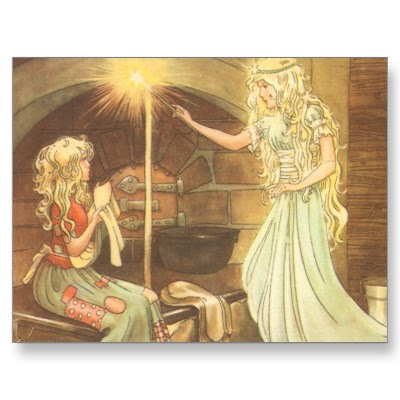 The loving figure of the Fairy Godmother has become so popular in our current fairy tale culture that we all-too easily forget her abnormality among the hosts of the fey. Until her, who among the fairy folk every showed any concern for the well being of a human? Most fairies couldn't care less for humans and many of them are overtly malevolent!

But the Fairy Godmother takes a keen interest in the comfort and social security of her godchild. Indeed, one might even be led to believe that she, immortal, otherworldly creature though she is, might truly love the mortal for whom she assumes the maternal mantle! 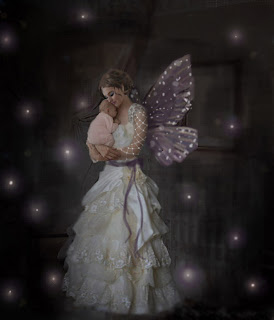 The Fairy Godmother was first introduced to the literary world via the pens of Madame d'Aulnoy and Charles Perrault. A supernatural being, she sometimes assumes the form of an animal or is imagined to be the spirit of a dead mother. The original Grimm's fairy tale version of Cinderella, for example, envisions the classic fairy godmother as a white bird that builds its next in a certain hazel tree which grew of Cinderella's mother's grave. That bird kept an eye on Cinderella as she grew. And when the time came for her to make her bid for freedom and attend the ball without her stepmother's blessing, she went out to the hazel tree and cried:

Shake and quiver, little tree,
Throw gold and silver down to me.

Then the bird threw a gold and silver dress down to her, and slippers embroidered with silk and silver. She quickly put on the dress and went to the festival. 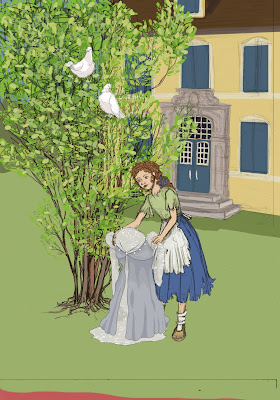 For the most part, however, the fairy godmother takes the form of a woman. Sometimes she is an older woman, as suited to her maternal role. The classic Disney vision of a fairy godmother has always tended this direction, both with Cinderella's fairy godmother: 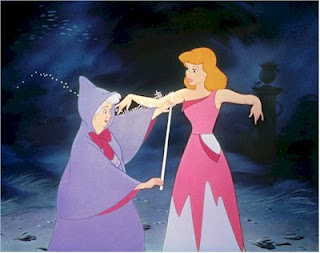 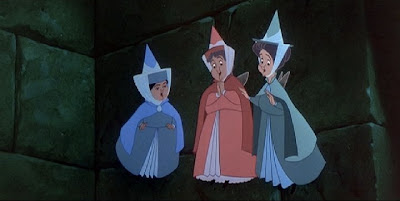 Other times, she takes on a more beautiful form, serving as an admirable mentor. This is more the vision Charles Perrault painted for his fairy godmothers: women well-connected with influence enough to see their protégées properly established in society, i.e. wed to the prince. 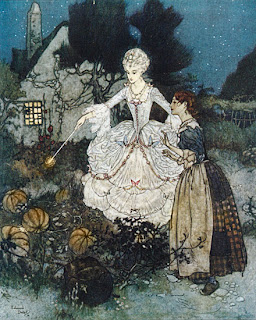 The popularity of the Sleeping Beauty and Cinderella stories have led to the Fairy Godmother being widely regarded as a common fairy-tale motif. In actuality, compared to the great bulk of fairy tales out there, however, the Fairy Godmother is not so common a blessing to young heroes and heroines as all that.

The Fairy Godmother is not universally good either, at least not always from the perspective of our heroines. For instance, in Madame d'Aulnoy's story The Blue Bird, the Fairy Godmother works to aid the heroine's evil stepsister, attempting to destroy the heroines hopes of marrying the hero. I'm sure from that Fairy Godmother's perspective, she is doing the right thing, seeing to the welfare of her godchild. From our perspective, though, she's a pretty scary cookie! 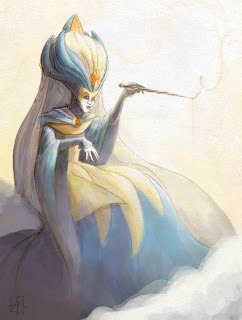 For the most part, however, we can look upon the Fairy Godmother as a figure of love and support in times of need. 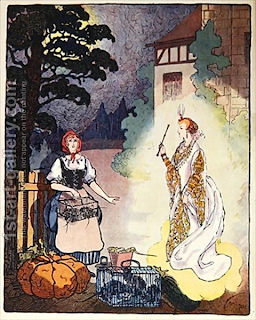 There are so many Fairy Godmothers in popular fiction today, I couldn't even begin to mention all of them. Who is your favorite Fairy Godmother? Perhaps in a retelling of Cinderella? Or a movie or TV show? I'm curious to know what you know!
Posted by Anne Elisabeth Stengl at 6:00 AM

Well, I grew up with the classic "bibbity bobbity boo" of Disney, so that lady has a special place in my heart. And Merryweather! The spunky little blue fairy from Sleeping Beauty has always been my favorite out of the three.

Yeah, no originality on this end. :)

I am awarding you with the Beautiful Blogger Award. To see what to do, you can go to either of my blogs.

I always loved the blue fairy in Sleeping Beauty. Is she Merryweather? Lol, though my favorite, I can't seem to remember her name. :)

Yay! The Christy Awards! I can't WAIT to see what you wear!
And as for the Fairy Godmother, I would have to say the Disney version is my favorite. :)

Have a good time in Orlando! I agree with Rachel6 about the fairy godmothers :) I love the Disney version! The Sleeping Beauty fairies are so cute and the Cinderella fairy is so lovable!

I just remembered a interesting Fairy Godmother . . . what about Lucinda from ELLA ENCHANTED? Any of you read that book? Now there's a godmother no one would want to have!

Ha ha ha! I thought Lucinda was hilarious, but I wonder why I never thought of her! I definitely wouldn't want Lucinda as my fairy godmother! :) lol

Yes! I have read Ella Enchanted! The fairy Lucinda is also in Gail Carson Levine's 'Fairest'. And I definitely agree with Molly!