Dear Readers, I know Tuesday is traditionally Your Weekly Fairy post . . . and I know that I missed the post entirely last week . . . in fact, I neglected to blog even once all last week! And I do apologize. I have been remiss in my bloggerly duties.

As many of you know, I do feral kitten rehab and fostering due to the large number of wild cats in my neighborhood (I also catch and spay/neuter/release the adults too old to tame). This summer has been so much busier with kitties than last summer, it's hard to believe I am making any progress at all! But I have had several successes with adoptions.

You met Mo and Muppet a few months ago. Allow me to introduce you to the rest of my kitty brood.

This is Mama Magrat: 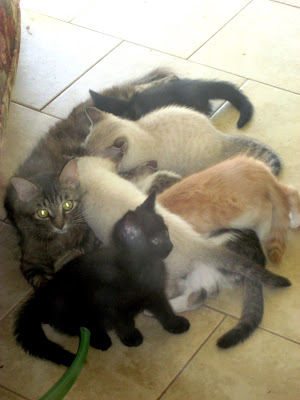 If you count carefully, you will see that she is attempting to nurse six kittens there . . . four of which are her own, two of which she firmly BELIEVES are her own, and let no one try to tell her otherwise! We rescued her early this spring, planning to let her have her babies and then find her a home. Well, she found a home . . . with us. Not giving that girl up!

She is the mother of the litter that I used to illustrate the finer points of Manuscript Editing, as seen here.

The one girl of this explosion of fluff and cuteness is Muffin: 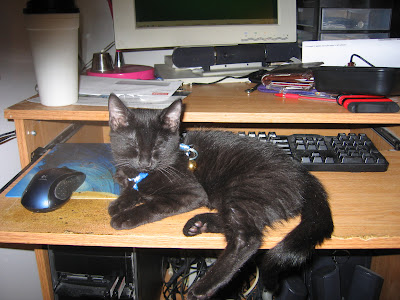 Here she is at her new home, renamed "Ariel" and loving her life. 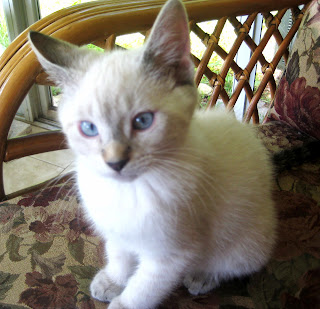 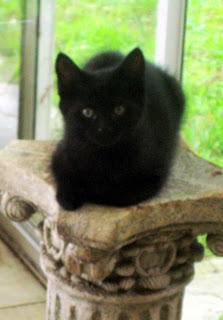 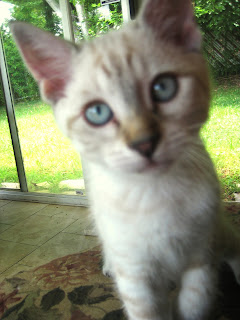 Mongol and Mortimer went to a new family together where they are renamed "Pickles" and "Dill." Slightly less majestic, perhaps, but they're enjoying a houseful of children to play with and snuggle, so I don't think they mind!

Marzipan (my favorite) just went to a family out in the country where he now owns a nice little boy who renamed him "Figaro Friendly." Which is really rather too adorable for words.

The first "adopted" sibling was Dusty: 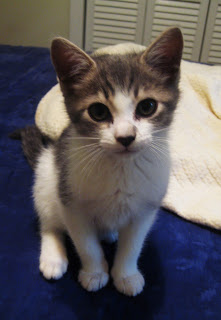 He went to a home a week ago where, as far as I know, he retained his name. (I didn't name him "Dusty". We have a tradition of "M" names here at Rooglewood. But he and his brother came to me already named, so what can you do?)

We still have Rusty! 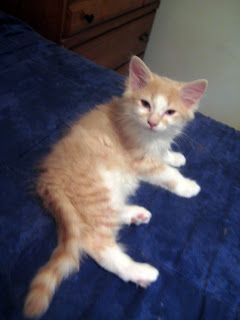 This fluffy and personable little boy is looking for a forever home! Know anyone who might want a little extra furry beauty around their home?

And then the most recent additions to the house are: 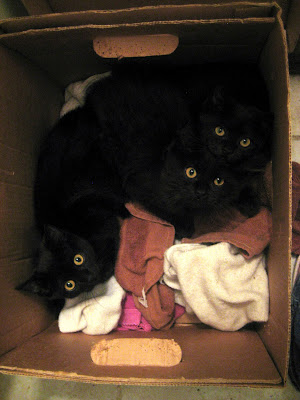 These are three more wild babies I caught out of my back yard. Mousse (short for Chocolate Mousse) is fluffy and easy-going and very affectionate. Minko, the runt, is the funniest looking little boy you ever did see and, no matter how much I feed him, never seems to grow! 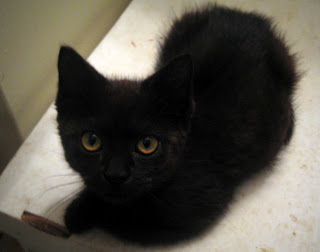 But he's the liveliest and lovingest by far!

Yeah, Minko is my darling. And big sister Midnight, after three weeks of intense work, has FINALLY just started to purr for me. I was starting to wonder if I'd ever make a breakthrough with her, but seems like we might have cracked that tough nut in the end!

Anyway, all that to say, more than two hours of every regular work day has been swallowed up in kitty rehab and adoption events and basic care, etc. etc. Doesn't leave as much time for blogging as I would like! I do feel bad to neglect you all, and I promise to get back to regular postings as soon as possible!

But in the meanwhile, who can resist these furry little faces in need? 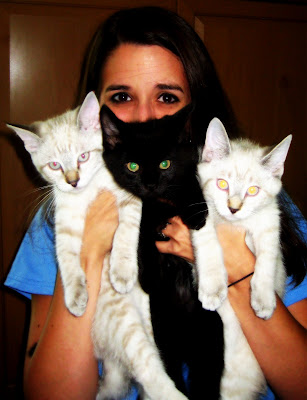 Posted by Anne Elisabeth Stengl at 10:42 AM

I still say Minko looks like a soot-sprite, and I still say that is adorable and awesome in the extreme.

I'm sorry to hear about your cold! One can push on through many things, but head-colds only gum up the works and nothing makes sense, and when you do have a breakthrough in your plot you only find, when you get better, that the plot will only make sense when read with a +100 fever. Colds are no fun.

Oh no!! Colds are terrible.
Everyone at my house has been getting colds too...

AND OH MY GOODNESS. I can never resist cats. I think we might have one if my dad weren't allergic to fur! And he just LOVES cats a LOT.
Minko is so cute! Black HAS to be my favorite color on a cat.
:)

Talk about an overdose of cuteness! I've followed your various posts on cat fostering and noticed that you seem to be adding about one kitty per year...I can't imagine how full your house will be in ten years time. But they give so much love and so many cuddles I'm sure it's nearly impossible to resist. :)

Colds seem to be going around the world right now! I just got over one. Ugh.

You're so good with names! I have a horrible time trying to find nice names. Yours are ADORABLE! I've always wanted a kitten, but I could never have one because so many people in my family are allergic :( We do have an outdoor cat though. She's really sweet :) Your kittens are so cute!

by the way, I started reading Heartless today and I'm almost done, I haven't been able to put it down! I can tell you, it's the most intense story I've read! I'll be reading the next book soon! (:

D'awww, Minko is so cute!! How can we begrudge a barren blog when you've been babying bitty kittens?

I WOULD TOTALLY GET ONE IF I LIVED CLOSER!!! I hope you feel better, Anne Elisabeth! And have a great Fourth!