Just like with Heartless last year, there really isn't a single X-related thing in Veiled Rose that I can write a blog post on. So X is, until further notice, becoming my wild card slot, and I will blog about whatever I wish to!

Last year, that meant writing a post about my foster kittens. So, hey! Why not make that a tradition too? Prepare to meet 2012's batch of rescue kitties . . . thus far . . .

For those of you new to my blog, I'll let you know that my husband and I do feral cat rescue and spay/neuter. Feral cats are wild animals that have had no domestication whatsoever. Most of them cannot be tamed. But if you catch them as kittens, it is possible to domesticate them . . . if you devote several hours of each day to their taming! 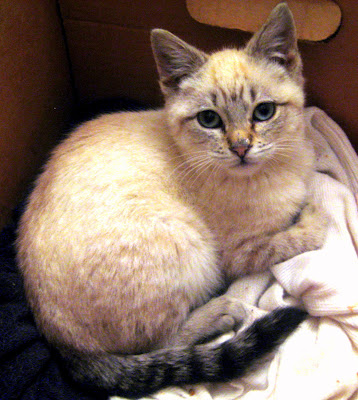 Yes, I heard your sudden squeal at the cuteness.
This little guy was very quiet and solemn when I first caught him. Other than a few pitiful "Merrrowls" to prove his Siamese heritage, he just sat in a lump for several days, unwilling either to fight or flee. This actually made his taming process easier since he didn't resist me. Within three days, I had him purring in my lap, and Mo proved to be just the sweetest, most thoughtful little kitty!

His sister, however, was MUCH harder to work with! Meet Muppet: 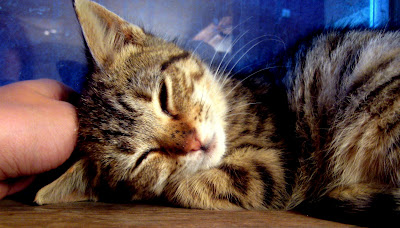 Don't let that image of furry sweetness fool you! When I first caught Muppet, it was like having a tiny, terrified tigress on my hands! She weighed scarcely more than a pound, but she was ready to FIGHT FOR HER LIFE! I had to wear heavy-duty gloves when handling her. She also proved remarkably adept at leaping and ended up spending a couple of days behind the light fixture above the bathroom sink, tucked away where I could not reach her (without losing a hand, that is). Long after I had Mo purring in my lap, I was wondering if I would ever make a break-through with his sister!
I did. 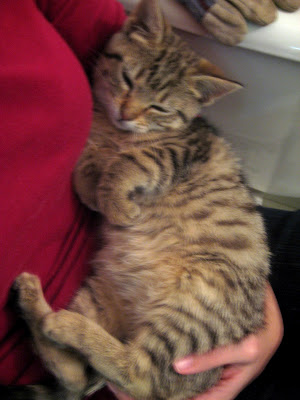 Snarling Tiger?
They say that the more terrified and wild a kitten is when you first catch it, the more thorough the breakthrough is when it happens. Well, it's true! Muppet turned into an absolute LOVE BUG, always wanting to be in my lap, purring and kneading the air with her sweet little paws. 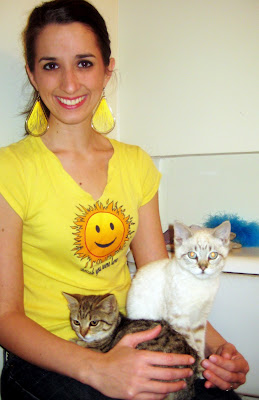 Rescue babies!
Mo and Muppet have both gone to their new homes now. Mo went to a friend of ours who has renamed him "Stig," and Muppet went to a young lady I found through a cat-rescue organization. She has been renamed "Cairo" in honor of her Cleopatra eye-liner, and is a very happy snuggle bug. Hoorah for success stories!
After catching those two, I decided to pursue catching all the adult wild cats in the neighborhood and getting them spayed and neutered so that we wouldn't continue having this kitten problem. So I made an appointment at the vet, set my trap, caught a wild, snarling adult cat: 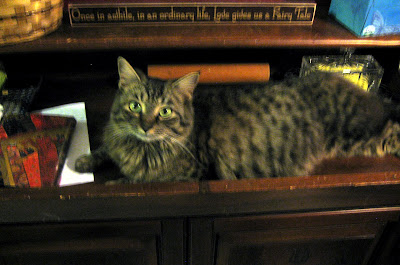 Actually, I caught this girl.
It was a fluffy female, one that I recognized. When I caught the litter of kittens last year, there was one that I never successfully trapped. The one girl in the litter. The one girl who was now . . . oh yes . . . hugely pregnant!
Turns out, along with being pregnant, she was also totally tame and loving. Which surprised me! Kitties that grow up in the wild practically never turn out tame. But this sweetie was the exception to the rule.
So, since she was tame, we decided to foster her and give her a safe place to have her kittens. Well, at least, I thought we would foster her! Instead, Rohan came home from work, she hopped in his lap, started purring, and he said, "Can we keep her?"
Yeah. Miss Magrat (Rohan named her) is now a permanent member of the Rooglewood menagerie. And she had her kittens last week! 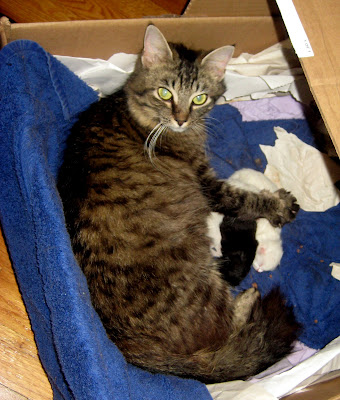 Four kittens! Two black, two white.
Yes, we will be overwhelmed with felines for a little while. Say a prayer that the perfect homes will come around for all these bitties! In the meanwhile, we are enjoying our first newborn kitten experience. If you'd like to read more about it, you can check out Minerva's Blog . . . Minerva, being a cat, has a unique perspective on all the doings of this household.
Would you like to see last year's rescues in their new homes? 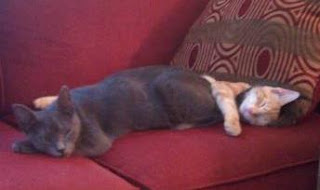 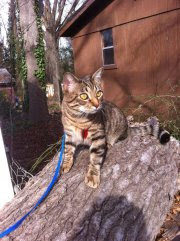 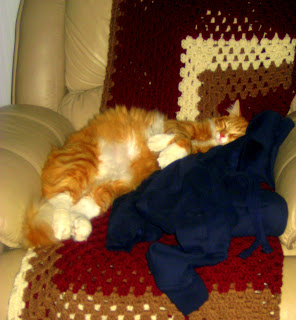 And Monster! The one we kept.
Who is now 15 lbs and growing!
All right, sorry to any of you out there who aren't cat people! I'll be back to literary topics next week.﻿
Posted by Anne Elisabeth Stengl at 6:00 AM

I'll interrupt my own frenzied squeals of delight and see if I can post a semi-intelligible comment.

I'm so glad you've had success with all your rescue animals. It's been fun reading Minerva's take on the process; her posts never fail to make me laugh (although that may not be her purpose, so don't tell her).

All the photos you've posted are so cute. Mo (or Stig) is adorable. Such a handsome kitty - that Siamese coloring is gorgeous. The photo over on Minerva's blog of Mo playing with his toy is cute enough to kill. And Muppet's "eye-paint" is very dashing! There is just no word to describe how adorable kittens are.

Is Miss Magrat Monster's sister? Your menagerie keeps growing so rapidly that it's difficult to follow! Last year's batch is shockingly grown up; I can't believe how huge Monster has gotten. (Although he's still a little smaller than my cat, who weighs in at 18 lbs.)

Curiosity question: what leads you to give all your pets names beginning with "M"? I've been meaning to ask you and just hadn't done it.

Those kitties are so adorable, and I think it's wonderful that you're rescuing those beautiful little critters and helping them find loving homes!

Awww! I want one sooo badly! Btw, I absolutely love Minerva's blog and have read every post...I just can't comment on it :( But please pass the message on to her that I think she is gorgeous and the perfect ruling despot!

I'm riveted! They're all beautiful! Your a Saint of the Highest Franciscan Order! Galina

:) Love all these comments from kitty-lovers!

@Abigail: Yes, Magrat is Monster's honest-to-goodness biological littermate. I ALMOST caught her last year when she was a tiny kitten, but she walked into the trap . . . and walked back out again. (Dragons eat it.) But I suppose I'm just as happy in the end, because she's safe now AND has given us a kindle of the cutest kittens ever! (They're about to open their eyes . . . I'll be posting more pictures soon!)

As to the M names, that's really no more than an odd family tradition. It started out because kitties almost all have that distinctive M shape on their foreheads. So my first kitty-girl was Marilla, and my family up north has Myles, Monty, and Mimi . . . and now my menagerie . . . Rohan and I keep discussing the possibility of breaking tradition, but it's almost become a challenge these days!

Aww...cute kitties. I also just read the FamilyFiction Edge article today--you and your husband met at fencing class? Aww, that is so sweet.