W is for Wolf Lord 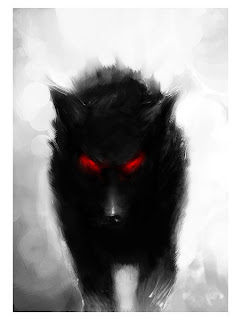 The Wolf Lord is dead. He has been dead for a very, very long time. By the time Leo comes on stage, there hasn't been any living sign of the Wolf Lord for approximately sixteen hundred years, in fact!

And yet, how many references are made to and about him? How often is his shadow glimpsed or his voice thought to be heard?

This monster of legends has cast a long shadow that extends through history and even now gives the people of Southlands shivers at the very mention of his name. But who was the Wolf Lord exactly?

We only get bits and pieces of his story through the course of Veiled Rose. Most often, riding in tandem with his name is that of his foe, Maid Starflower, Southlands' most famous heroine. These two--the maid and the wolf--are inextricably linked through history. In Southlanders' minds, they are as inseparable as Red Riding Hood and her wolf are to us! You cannot have one without the other.

But though Starflower is gone from the realm, living on only in stone carvings and classical Southlanders' art forms, the Wolf Lord is still glimpsed by those fearful souls who find themselves alone in the woods at night. Like Leo . . .

And Leo started to glimpse shapes that flickered on the edge of his vision, deep in the forest shadows. His heart beat faster and his pace increased. The laughter around him continued, and more and more often he kept glimpsing things not there. Or things he hoped were not there.
He saw a wolf.
It was as big as a horse, loping between the trunks. Faster and faster it approached, and Leo could not see its face, for it was nothing but a shadow, but he could feel eyes like daggers fixed upon him. Predator and prey. Yet Leo could not run. He came to a standstill and watched as the shadowed horror drew nearer. He could almost hear the panting of hot breath, could almost smell the musk of the hunter, until it was but a few feet away and leaping . . .
It passed through Leo's chest. Then it vanished. (p. 79)

The Wolf Lord is dead. It can no longer cause harm to the mortals of the Near World.

But it can certainly still prey upon their fears! In memory at least, Starflower's nemesis lives on.

We have an opportunity to meet the Wolf Lord later on in the story, for Rose Red, our intrepid heroine, finds herself venturing down into the Realm of Death where ghosts such as he still dwell. Rose Red carries with her the Asha Lantern, a gift of protection from her Imaginary Friend . . . and a gift that the Dragon does not want her to have. The Dragon commands all the creatures of his realm to take that light from her and destroy it.

But the gifts of the Prince of Farthestshore are not so easily taken. Though the Wolf Lord is as huge as he is brutal, his cunning alone will serve him in his attempts to carry out the Dragon's command. And Light of Lumé, is the Wolf Lord ever cunning! See his initial interaction with Rose Red:

"That cursed light," he snarled. His voice heaved as though speech gave him pain. But his eyes gleamed in the glow of the lantern, glaring at Rose Red with hatred and despair. "Who dares bring that poison light and shine it in my eyes? Have you no compassion?" (p. 257)

"Have you no compassion?" Not a very monster-like phrase, is it? This is enormous creature, this ravenous destroyer, this wolf of nightmares faces our little heroine and accuses her of cruelty! Rose Red, gazing at this terror of Southlands sees a wounded, frightened, suffering creature. And it is her compassion that is aroused, not her fear.

We learn more hints about the Wolf Lord's back story through this encounter with Rose Red. Half-hints and half-truths, to be sure, but we can pick out bits and pieces of the bigger picture. For instance, when he says:

"They tore into me! . . . My own! My own! She betrayed me, though I loved her. Yes, my love was all too violent, too terrible and great for her to comprehend. But she betrayed me, and they tore me to pieces." (p. 258)

We can guess that it is Starflower he refers to when he says "she." Whether or not there was "betrayal" involved, who's to say? After all, we only have his point of view on the subject. Who the "they" that "tore" him were, we don't know for sure. Perhaps the Southlanders themselves? After all, the Wolf Lord tells:

"I ate them; I devoured them, the mortal insects! I enslaved them with fear and worship, made them offer me gifts upon this stone. And they hated me . . . They hated me, though I loved them, the little crawling things. They were ignorant and dirty; they needed my guidance." (p. 259)

So perhaps the Southlanders of ancient days rose up against him? There is little else for us to go on as far as the "they" who "tore into me" are concerned!

Whoever they were, they destroyed the Wolf Lord beyond even Rose Red's aid, though she tries to help him even in his ghastly, ghostly state. But when the Wolf Lord tells Rose Red that she cannot help him, I can't help but wonder if he is refusing to let her help. If he has created a hell for himself in this place of death, and no ministering hand will reach him in that place.

A pathetic creature, this beast of legends. Not at all what one might expect to meet after hearing all those half-stories about him! But then again, the unexpected quality itself is terrible, perhaps more terrible than if he had been all wolf and ravening.

Personally, I find him quite horrifying!
Posted by Anne Elisabeth Stengl at 9:11 AM

As do I! The cruel beast set himself as a god among the Southlanders, and demanded a high price. Its no wonder that they overthrew them. We WILL get to see the story play out in Starflower, yes?

I couldn't help but feel a tad bit sorry for the Wolf Lord...but, like Eszter said, he set himself as a god and deserved to be overthrown. Also, if the part in Veiled Rose where Leo sees the ghost wolf creeped me out...who knows what Starflower will do to me!

@Clara: I know, you do feel a bit bad for the Wolf Lord. And I think, were we to know his whole story, while we would still be terrified of him, but we might also feel a bit bad for him then too. Maybe . . . I do hope STARFLOWER doesn't freak you out too much! There were some tense moments when I wrote it (yes, even I sometimes get scared by my plots!), but there are some good, hopefull, and even funny moments to balance out all the scary stuff! :)

I just want to say I ordered Moonblood last week, got it yesterday, and am reading it today. =)

Well, as long as Sir Eanrin is there to save the day...I think I'll be just fine!