V is for Veils

It probably won't surprise any of you to learn that veils are my favorite literary symbol.


If literary symbols are something you have "favorites" of . . .
By "favorite," I mean, it's a symbol about which I have written several college papers, both for English and theology classes. One was for a class devoted to the study of Nathaniel Hawthorne (whose Scarlet Letter I have STILL not read, despite this class!) and Herman Melville (of Moby Dick fame. Which I did read. Yeah . . .). That paper was titled "The Choice to Unveil" and dealt with characters and themes from Hawthorn's lesser known novel, The Marble Faun. It began as such:
"Throughout literary history, veils have been used as symbols to represent a variety of themes, including sin and repression, innocence and lies. In her article, “To Veil or Not to Veil,” feminist Marla Del Collins writes, “The veil has wound its way through . . . patriarchy, classism, sexism, colonialism, ethnicity, religious beliefs, national pride, extremism, modesty, shame and oppression” (14). No matter what it is used to symbolize, however, and no matter what context, the chief feature of the veil is this: The Prevention of Knowledge.
"Nathaniel Hawthorne in his final novel, The Marble Faun, makes use of veils in this sense. By comparing his two heroines, innocent Hilda and guilty Miriam, one may see both unintentional and intentional prevention of knowledge. Both heroines experience “unveilings” at traumatic moments that change their lives forever. One is forced into knowledge that she cannot accept; the other is forced to reveal knowledge she desired to remain hidden. When faced with the choice to either reassume their veils or live with revelation, these two characters, by their separate and surprising choices, illustrate the difference between innocence and true virtue."

I'm not offended if you didn't bother to read all that. Let me sum-up the gist for you: "Veils Prevent Knowledge."

If you did read that whole thing, however, you might be able to pick out similarities between Hawthorne's Hilda and Miriam and my Rose Red and Daylily. One innocent, one guilty . . . but which is which?

Of course in Veiled Rose, my main character, Rose Red, lives with a physical veil disguising her face . . . not to mention rags covering every inch of her body so that that knowledge of her true self is completely withheld from both the reader and the other characters. In fact, Rose Red herself is apparently unaware of her true face and form.

But could not the same be said, ultimately, for Lady Daylily? Have a glance at this scene:

"It's my secret," Rose Red repeated. She wanted to back away, but the baron's daughter held her locked in her gaze. So she closed her eyes behind her veil, hoping somehow to gain the courage to flee.
Daylily set her teeth. Then she reached out and removed the veil from Rose Red's face.
The fire crackled on its heart. Outside, the wind pressed up against the window, rattling the glass, then moved on its way with a howl. The Lady of Middlecrescent and the prince's chambermaid stared at each other in the dimly lit chamber, and in that moment, neither wore a veil. (p. 178)

We as the reader are not privy to the knowledge revealed in that moment. All we know is that right there, in that tense moment of time, Rose Red and Daylily saw each other for what they truly were. Knowledge was granted, knowledge that neither was entirely willing to give or accept.

There is another moment later on that contrasts this idea of veils between Daylily and Rose Red. It is the scene that describes their journey from the Eldest's House after the coming of the Dragon. They have the poisoned Lionheart on a horse and are struggling across deserted countryside attempting to get him (and themselves) to safety.

Nearly a week of this life would drive anyone mad, and Daylily's careful mask threatened to break with tears on more than one occasion.
All that kept her going was Rose Red.
Daylily could not see behind the veil. She could not tell how the smoke, the subtle poison, or the bone-weary journey affected the maid. Perhaps she too was crumbling. Perhaps she felt nothing at all. More than once Daylily longed for a veil to hide her own weakness. She could not let this person--this goat girl--see her break. (p. 198)

Here we have another case of the veil preventing knowledge, in this case, Daylily's knowledge of Rose Red's mental state. Rose Red's physical secret is out, but there is a deeper part of her that Daylily cannot penetrate . . . and because Daylily's soul has already been laid bare to Rose Red, it is Daylily who stands in the more vulnerable position.

Veils, of course, have a strong spiritual connotation as well. I wrote a paper for a theology class dealing with the passage in 2 Cor. 3:

"Therefore, since we have such a hope, we are very bold. 13 We are not like Moses, who would put a veil over his face to prevent the Israelites from seeing the end of what was passing away. 14 But their minds were made dull, for to this day the same veil remains when the old covenant is read. It has not been removed, because only in Christ is it taken away. 15 Even to this day when Moses is read, a veil covers their hearts. 16 But whenever anyone turns to the Lord, the veil is taken away. 17 Now the Lord is the Spirit, and where the Spirit of the Lord is, there is freedom. 18 And we all, who with unveiled faces contemplate[a] the Lord’s glory, are being transformed into his image with ever-increasing glory, which comes from the Lord, who is the Spirit."

But this discussion will better serve an article for Moonblood, so I won't pursue it now . . .

So yes. I really love the symbol veils which the genre of Fairy Tales allows me to deal with on an open level!

Allow me to take this moment to express a word of encouragement. I know that several (if not many) of my blog followers are college students, and perhaps some of you are pursuing an English major while simultaneously fostering a dream of fiction writing. I want you to know that I remember vividly that period of my life in school when everything was taken up with research papers and class assignments, and the opportunities for creative writing were few and far between. It  can be discouraging, I know, and it is easy to start thinking, "What am I doing here? I want to write! When will I ever get the chance?"

The writing will come. But your current opportunity--this chance to throw yourself into deep literary analysis, to learn what secrets the great writers of old have to share, to study symbols and themes and archetypes and all the brilliant ways they can transform a story from a mere story to a work of gorgeous, meaningful art--that is the opportunity of a lifetime! It's work, yes. But it's wonderful work!

That English Lit. 101 class might just hold the key that will unlock the mysteries of your future great novel. So keep your eyes open!

On a last (and slightly gushy) note.

Do you know, it's due to my love of the literary veil (and the fact that I had just drafted Veiled Rose in the months lead up to it), that I chose to wear a veil for my wedding? 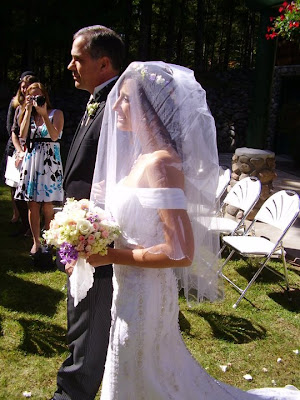 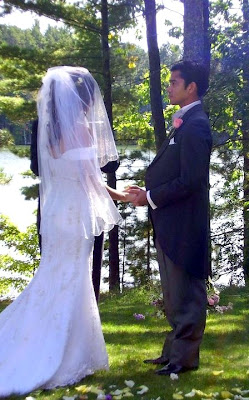 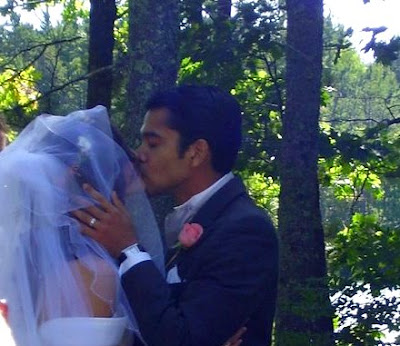 While I understand that the traditional reason for a wedding veil was so that an unwary groom didn't run away at the first glimpse of his sight-unseen bride . . . I love the symbol of innocence revealed, of transformed glory, of a coming to true understanding in the context of a pure and godly marriage. Which is why, while I know many brides who raise the veil through the ceremony, I wore mine until we were pronounced man and wife, and it was Rohan lifted it to kiss me as his wife.

While I'm not terribly traditionalist when it comes to weddings, that's one tradition that I truly love! Especially as a former English major . . .
Posted by Anne Elisabeth Stengl at 9:53 AM

That encouraged me so much Anne Elisabeth! I sometimes get very frustrated when I'm having to write a research paper instead of the book that's forming itself in my mind:) Although... my mother might get more frustrated than me when I give her my finished paper and it ends up to be more of a story than a "research paper"! Btw, your wedding dress and veil were so gorgeous!

Anne, that was a truly magical post. I had never understood the symbolism of veils before.

Your post brought to mind 1 Cor 13:12, the "for now we see in a mirror, darkly" verse. Specifically, it made me think of Paul's metaphor for vision, and how we shall know and understand more later. :)

Also, I love those wedding pictures!!

I think that we all wear a viel to hide our true inner selves, because we're afraid that if we reaveal our true selves, then nobody would like us for who we are. But I love how you used the viel in Veiled Rose, and in Moonblood. And I like your version of the wedding veil symbol much better than the general one. :)

I suppose you are aware of Till We Have Faces, by C. S. Lewis. The main character wears a veil for a good part of the book.

I am, indeed. Such a beautiful book! I always wanted to write a paper on that one while I was in school, but never had an opportunity. Lewis is a huge inspiration to me, far beyond even his incomparable Narnia stories!