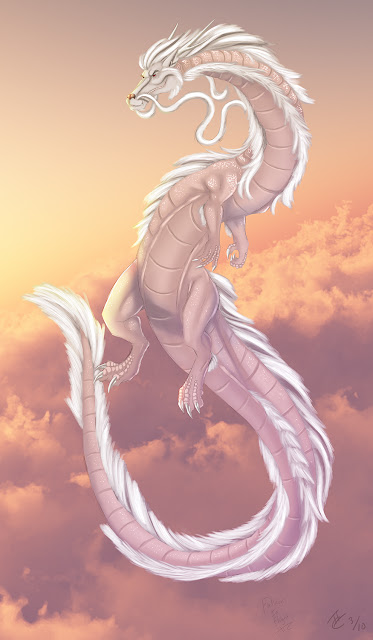 We first meet Falkor in dire straits, caught in the web of a monstrous spider who is creepy enough to give the famous Shelob a run for her money: Ygramul the Many.

Falkor is no ordinary dragon himself. As the author says, "Luckdragons are among the strangest animals in Fantastica. They bear no resemblance to ordinary dragons, which look like loathsome snakes and live in deep caves, diffusing a noxious stench and guarding some real or imaginary treasure" (p. 64).

Falkor, instead, is a creature of "air, warmth, and pure joy." He has a luxuriant mane, a pearly, pink-and-white body, vicious fangs, and ruby-red eyes. He flies without the need of wings, because he is light as a cloud! They swim through the air, and they sing in golden, bell-like voices, a song that makes the hearer glad to remember to their dying day. 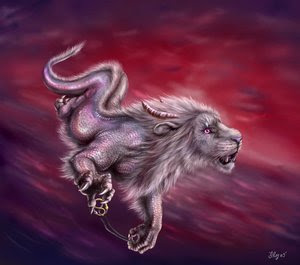 A more lion-like take on the luckdragon.
Surely, there was never a more beautiful or unusual dragon than Falkor. He is also a brave fighter and a loyal companion! When the brave Atreyu helps him to escape Ygramul, he joins the boy warrior on his quest to save the Childlike Empress. And, because he's a luckdragon, he's handy to have around! Though Ygramul fills both him and Atreyu with her dreadful poison--a poison that will kill them within an hour--Falkor is unconcerned.
"Every poison has its antidote," he says. "Everything will turn out all right. You'll see." (p. 72)
And, of course, he's right. But I won't give that part away! 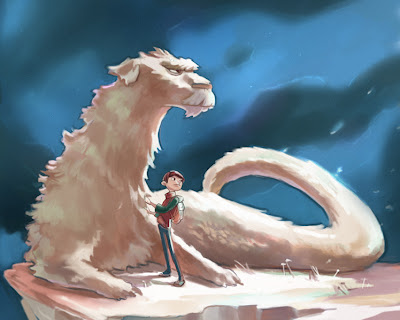 Hmmm, not quite as accurate. Where are his scales?
Falkor is one of the best-remembered and best-loved aspects of Michael Ende's novel. And if you haven't read the book, possibly you have seen Falkor as he is represented in movies (there called Falcor). I was never a huge fan of the movie myself, but how can you not like the enormous, scale-covered, huggable puppy that is Falcor? 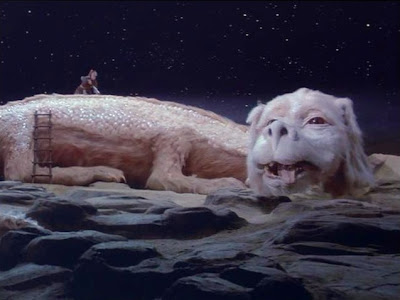 "I dare you not to hug me!"
Definitely not a figure of magnificence and pure joy as Ende envisioned . . . but huggable, right?
Falkor on a scale of 1-10
Evil:  0
Not evil at all! He's really quite loveable, whether in puppy or non-puppy form.
Scariness: 6
In the book, he's quite fierce when you first meet him. And I imagine his enemies would find him frightening! (But not in puppy form.)
Poison: 0
Luckdragons jut aren't poisonous.
Hoard: 0
Nope, no hoard for this fellow!
Cleverness: 7
He's clever enough, but gets by mostly on luck, which doesn't take a great deal of cleverness.
Posted by Anne Elisabeth Stengl at 6:00 AM

I've never read The Neverending Story, but Falkor sounds like an interesting character; I like the quote about how different he is from "ordinary" dragons. Is the top image from the movie, or is it just a piece of artwork? I watched the film years ago, but all I recall is that the dresses looked like they were made of aluminum foil.

Nope, it's just a piece of artwork. The movie version simply isn't awe-inspiring! But that first picture reminds me very much of classic Chinese dragons, which Falkor was possibly modeled after(?).

I definitely recommend The Neverending Story. It is a very, very, very strange book. But marvelous in its strangeness, and a good read, especially if you're in the mood to see a completely different style of storytelling!

Heheheh, aluminum foil dresses . . . How chic! That about fits the movie, though.

I was thinking Chinese dragon too. They are pretty easy to spot, not like scaly Western kettle-drakes. I've always been a touch partial to the furry Chinese reptile. It must be the cat-lover in me. There needs to be something soft to cuddle.

(I have noticed, as regards the second illustration, that carvings of Chinese dragons are often easily mistaken for lions. I wonder why that is.)

Something soft to cuddle! Amen to that! :)

Christa here!
I definetely like the first picture. I don't care too much for that puppy form.

I love that first picture. Like Christa I'm not a fan of the puppy one. It's kind of...odd.

I wanted to ask you, Anne, have you ever read The Little White Horse by Elizabeth Goudge? If you haven't, I think it's something you would really enjoy. (the cat in it reminds me of one that would be a resident of Rooglewood:)