Some of you may know that I am also an artist. I used to teach art classes to children and adults and also painted portrait commissions for a couple of years there! But my true love is for illustration. When I went to college, I studied both illustration and English Lit. with the hope of one day writing and illustrating my own stories.

Well, the writing is happening on a professional level . . . not so much the illustrating. But, my Rohan gave me a gorgeous art studio after we got married, so I figured I might as well start dabbling a little bit in that side of my creativity again! Thought you all might like to see the development of one of my illustrations.

This is a collage-style acrylic painting for Moonblood, book 3 in the Tales of Goldstone Wood. Here is the initial sketch and beginning of the base coats. I kept the sketch very minimal since most of the details will happen in the paint. The color blocking I did in gouache. 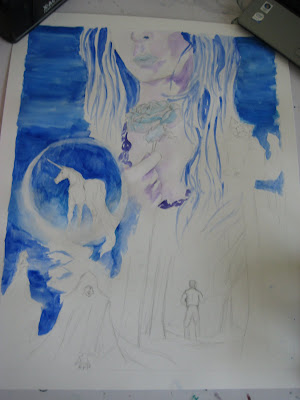 And here it is completely blocked, all the various characters in place. Oh, dear! I have to be careful not to name names! Don't want to spoil the next book or two for everyone. Well, the cat at least you will recognize from Heartless. Monster is looking very smug here in his base coats, isn't he? 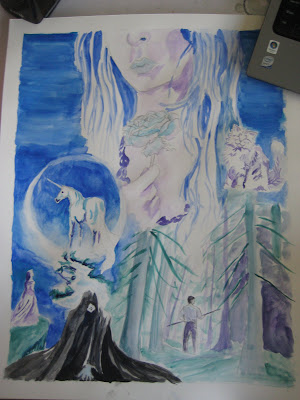 ﻿
Here you see the first layers of acrylics going down. I always start with either a blue or a purple undertone for skin, thus the corpsy look for the girl! Probably too much detail in the unicorn for this early on. Oh well! The forest was probably the hardest part for me . . . I'm used to portraits, but landscapes are not my thing. Had to experiment a couple of times before finally hitting on the right undertones. Monster looks smugger than ever with his first layers of gold! 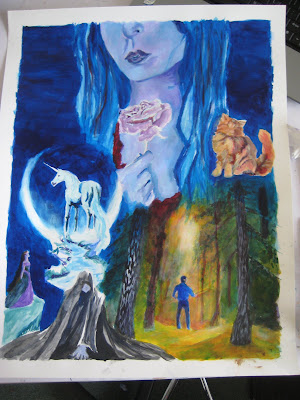 Oh no! She went goth! Actually, I realized her mouth was the wrong shape and had to reconstruct it. 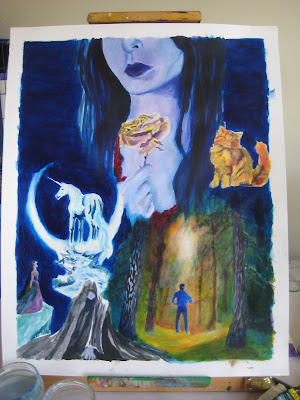 ﻿
Now she has highlights! Less goth though, right? And you can see that the forest is starting to develop nicely . . . 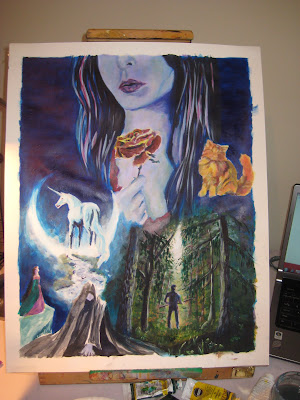 Flesh tones for her. And the Hunter is starting to come into his creepy own! He has a bit of a batman-esque quality to him. Not sure if that's what I was going for, but okay! 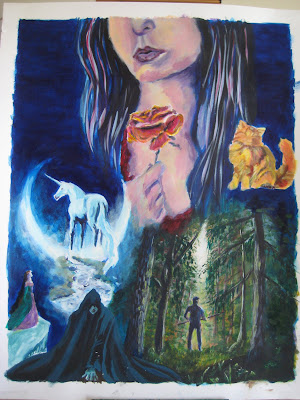 Now for the tiny queen. I kept putting her off because she was SO tiny, I wasn't sure how I would paint her! Even considered painting her out for a while there. Glad I didn't though. She adds a nice ghostly touch: 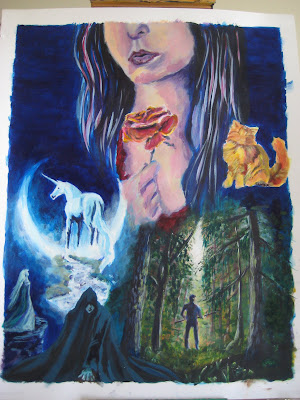 ﻿
Now for the unicorn and Monster. They've patiently waited long enough in their base coats. Looking much handsomer now: 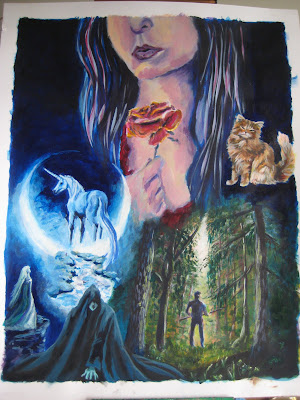 ﻿Here you an see the rose getting redder and stars starting to emerge. But she's looking a bit pasty. I wanted a moonlit glow, but she kind of looks sick. Besides, she's described as having golden skin in the novel . . . 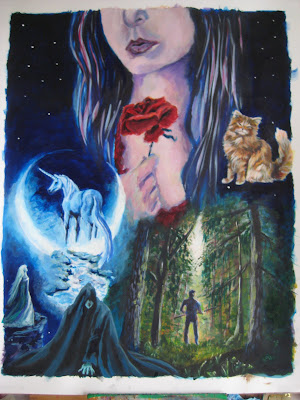 Okay, that's better. And finished too! I gave her a bit more color and reconstructed aspects of her face as well. Added some ominous mist, and voila! The first illustration I've done in years! I think my favorite part is Monster. But then, I'm always partial to the cats! 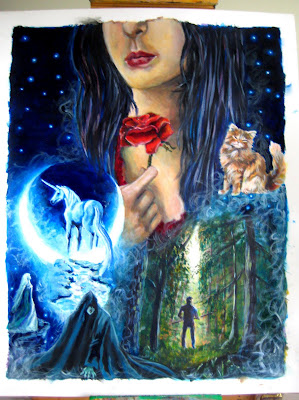 ﻿
So nice to get back into a bit of painting. Just for the fun of it, I made an advertisement! 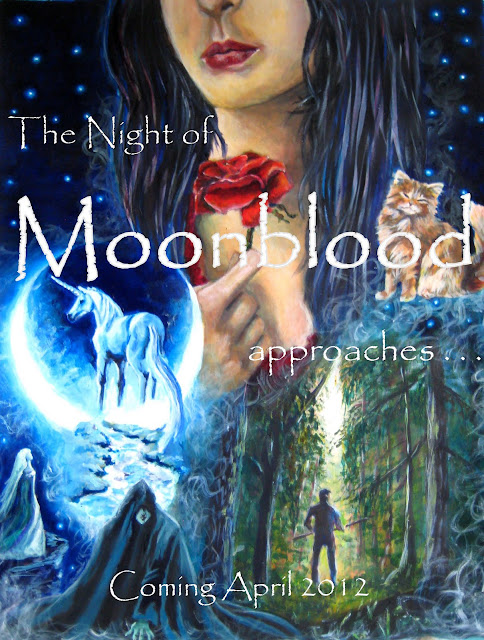 This was a purely for-fun project, not professional work. Hope you enjoyed watching it develop!
Posted by Anne Elisabeth Stengl at 9:00 AM

Beautiful! Looking forward to it!!!

Beautiful! I love seeing the process of your painting. I dabble a bit in art myself. I want to be a cartoonist for Big Idea or Disney when I grow up. Thanks for showing your talent to the world. Read your first book and loved it. I was hooked on the first page. I can't wait for the rest of the series. Your Mom went to the school I go to, Brethren. My Grandpa teaches there. His name is Ed Cashman. My name is Ashley Cashman, I am 11 years old. Thank you again for sharing the gifts God has given you with us.

@Ashley: Well, I haven't seen your artwork, so I can't judge, but you are EXTREMELY well-written for age 11! I would never have guessed that as your age from the note you wrote. I'm glad you enjoyed "Heartless," and I hope you will enjoy the rest in the series as well. That's fun that you go to Brethren. :)I hope they have good art classes there to foster your talents. I adore Disney, especially the princess movies. Hopefully by the time you're working for them, they'll have taken up doing princess movies again!

I loved Heartless, and am looking forward to reading your next books! Thanks for sharing your AMAZING artwork:)

P.S. I didn't even get to see my older sister until she was COMPLETELY done with Heartless...she couldn't put it down. Every time I asked her where she was she shooed me away saying "This is a wonderful book...Will you please leave me alone?!"

Thank you so much! :) I felt that way when I was writing Heartless . . . I couldn't stop writing because I wanted to see what happened next! But, as much as I enjoyed it, I always wondered if other people would get as much of a kick out of it as I did. So pleased to hear that both you and your sister felt the magic of the story! That's a blessing to hear. :)

I hope you will enjoy Veiled Rose as well . . . then, of course, be watching for Moonblood soon after!