Review: I Shall Wear Midnight 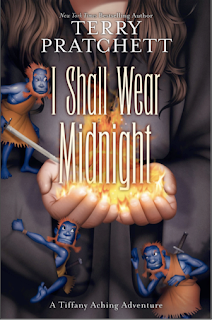 Witty and whimsical, tragic and terrifying, fascinating, fantastical . . . this is Terry Pratchett, my friends!

I Shall Wear Midnight is the fourth book in the Tiffany Aching sub-series of the much larger Disc World universe. Her story began with The Wee Free Men when she was only nine years old. Miss Tick took a stroll into Tiffany’s country village, recognized a particular talent, and Tiffany’s life was forever changed.

By this fourth installment, Tiffany is 16 years old and the professional witch of her village.

Note: For those of you with concerns about reading books with witches as protagonists . . . I totally understand and don’t recommend this book for you. I personally am not bothered by it, considering the universe Pratchett has created is completely different from our own. In this universe, the role of a village witch is very much the role of traveling nursemaid. Tiffany spends most of her time caring for the forgotten elderly, delivering babies, bandaging farm wounds, etc. She does work magic, but the magic is, as she puts it, “mostly Common Sense” . . . which does, indeed, seem magical to everyday people! And she wears a black pointy hat as a symbol of office.

Anyway, Tiffany’s story opens at a fair and ends at a fair, which I love. I absolutely adore bookends in stories. You start somewhere simple, build to all kinds of impossibilities then end where you started, simply. There are also brilliant uses of foreshadowing in this tale: The story the old dying baron tells Tiffany about crop-burning at season’s end . . . the recurring image of a hare running into the fire . . . everything is beautifully set up long in advance for the tumultuous climax.

I loved the very human elements of this story, especially the main character. Tiffany’s reactions to the young baron’s betrothal were hysterical and touching simultaneously. I really felt what she was going through!

Then there’s the danger: The Cunning Man, the old wraith of an evil memory, has risen from the darkness to hound Tiffany. Because she is a witch, and the Cunning Man, though he is nothing now but a memory, wants all witches to burn!

So, yes, plenty of intrigue, character development, plot twists . . . and, of course, Terry Pratchett’s laugh-out-loud wit peppering every page. I adore how the man takes a dark and complicated story but writes it from a comedic bent. He sees that life is both comedy and tragedy, that you cannot have one without the other.

So ultimately, I loved it. Not my favorite Pratchett novel ever, but a great read. I do not recommend it if you are uncomfortable reading novels with witches as protagonists. But if you don’t feel convicted on that score, this is a marvelously written and engaging tale (though you really should start with Book 1).

Pratchett is a genius.

Which is why he was knight and is now Sir Terry Pratchett. England knows how to honor her authors!
Posted by Anne Elisabeth Stengl at 9:00 AM

Which Pratchett book is your favorite? Just wondering which one I should start with?

Hmmm, good question. There are just TONS of them! I think I got hooked on Pratchett when I read, "Guards! Guards!" which is part of the Disc World series and the beginning of sub-series about the Watch. At first glance, it looks like a simple parody of fantasy . . . but as you keep reading, it gets deeper and more involved. Great characters, great story, and so many laughs along the way! But Pratchett makes you think as well. I loved it and subsquently loved the rest of the books about the Watch.

Other Disc World novels I have particularly enjoyed include "Hogfather," "Reaper Man," and "Soul Music."

Or, you can always start with Book 1 of the Tiffany Aching books. A nice way to step into the Disc World universe.

Probably my very favorite Pratchett, however, is a standalone YA novel called, "Nation." It's set in an alternate-history universe, and is funny and heartbreaking all at once. I loved the characters and the way he brought everything together to form an epic ending!

Hope that helps. I really love Pratchett and hope that you will enjoy his work too! :)

Thank you so much! Looking forward to starting a good book soon. I have a few more months till your new one comes out! ;-)