Today, dear readers, I am delighted to introduce you to Stephanie Ricker, author of A Cinder's Tale, fourth story in the Five Glass Slippers collection. Stephanie has provided us with the most "alternative" genre . . . something unusual in a fairy tale collection. And I am here to tell you that her story is fantastically fun!


First, here's a little about Stephanie herself: 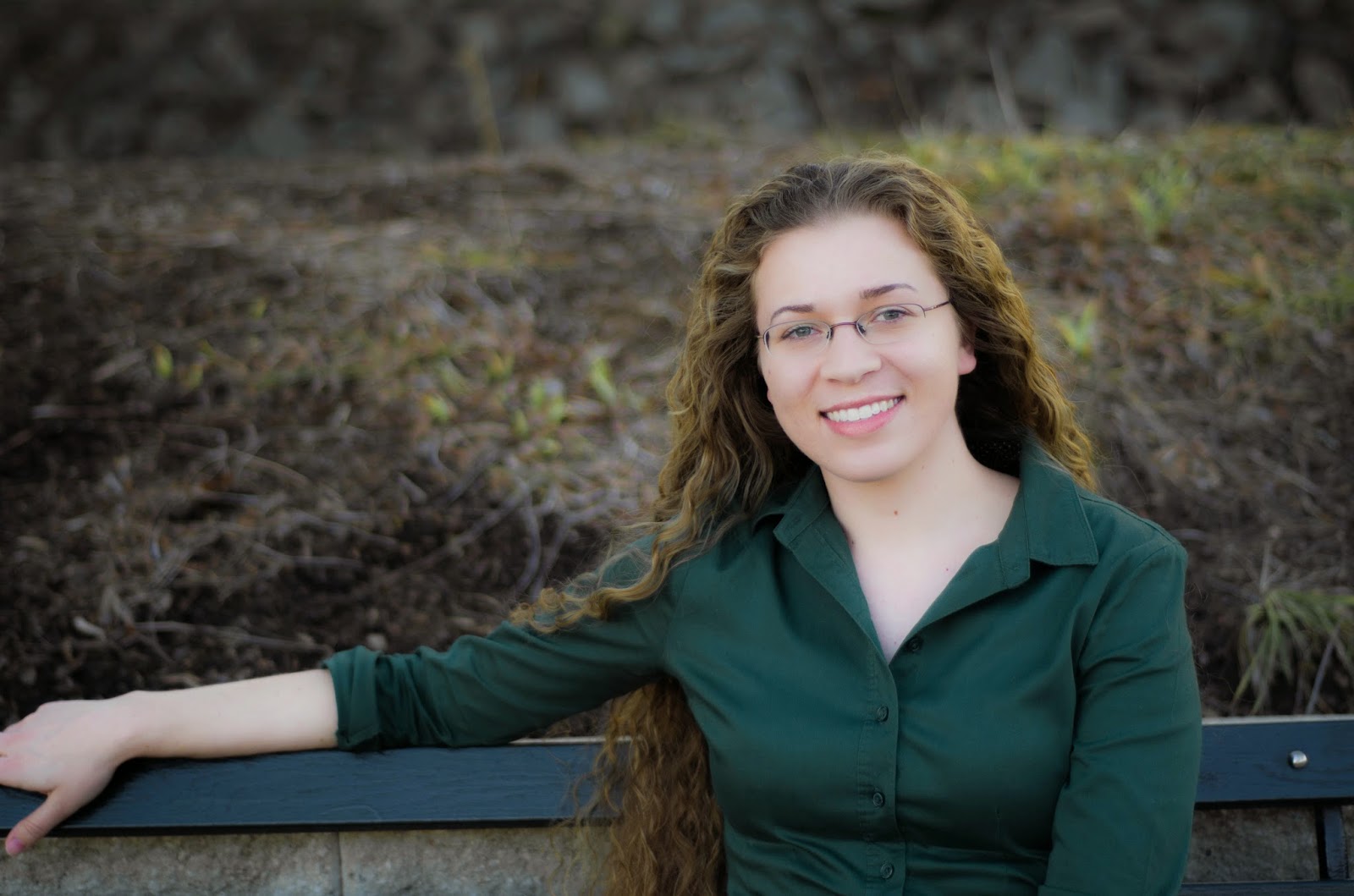 STEPHANIE RICKER is a writer, editor, and tree-climber. She adores the cold and the snow but lives in North Carolina anyway, where she enjoys archery, hiking, canoeing, and exploring with friends.
Stephanie's fiction has been published in Bull-Spec, a magazine of speculative fiction, and in four consecutive editions of The Lyricist, Campbell University's annual literary magazine.
Do enjoy getting to know Stephanie a little bit . . . and be sure to enter your name in the giveaway down below! You might just win yourself a Five Glass Slippers coffee (or tea!) mug.

Welcome to the Tales of Goldstone Wood blog! First of all, would you mind telling us a little about yourself? Hobbies, personality . . . tea or coffee?
Thank you for having me!  Oh, I’m definitely a tea girl.  My good friend Danielle works at a tea shop, and she fortifies me with amazing loose-leaf tea of all varieties.  I’m currently enjoying some vanilla mint pu erh.  Many of my friends are coffee connoisseurs, however, so I’ve learned to grind coffee and use a French press out of necessity.  Aside from writing, my hobbies include reading (surprise, surprise), editing, archery, hiking, canoeing, and spending time with family and friends, not necessarily in that order.  I’m an inveterate tree-climber.  I relish snow, cold weather, indie music, and sesquipedalian words.

What led you into the writing life? Have you always been a storyteller?
I’ve always loved telling stories, and if you spend enough time around me, you’ll probably hear the same tales more than once.  As a kid, I read constantly, and I think doing so made me view my own life as a narrative.  I wrote my first story, an extremely melodramatic mystery involving horses and way too much purple, at the age of eight, but I only became serious about writing in college.  Being around a lot of imaginative people who were all pursuing creativity in one way or another was extremely motivating, and I wrote many stories during those years.

Tell us a little about your work! Have you published other stories before? Is sci-fi your genre of choice or do you dabble in other genres as well?
I started out in short stories, and I enjoy that medium very much.  I enjoy twists, unexpected “what if” scenarios, and flipping narrative expectations.  My stories have been published in four consecutive issues of The Lyricist, Campbell University’s annual literary publication, and my short story “Inseparables’ War” was published in Bull Spec, a speculative fiction magazine. I find that I end up in the science fiction (or at least speculative fiction) genre more often than not, simply because I enjoy the endless possibilities.  I do enjoy dipping my toes in other genres once in a while, and I have the opportunity to write a lot of nonfiction at my job with an association management company.

How did you come up with the initial ideas for A Cinder’s Tale? Is this a story you’ve been brewing for a while or was it a sudden inspiration? 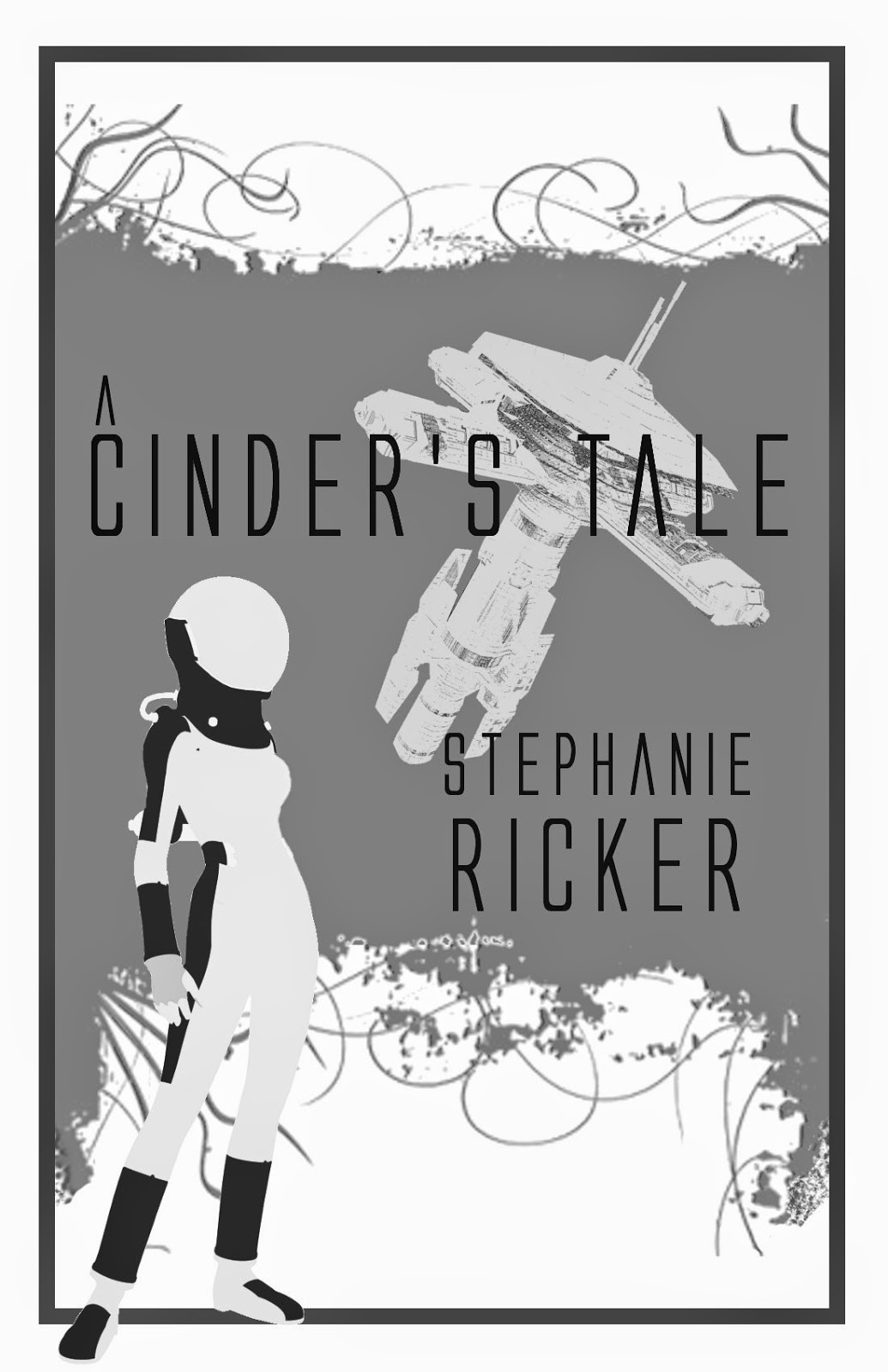 Sudden inspiration, for sure!  A friend and I were discussing the contest, and she urged me to enter.  I didn’t think a fairy tale retelling was really my area, but she told me to mix it up and set Cinderella in another time and place.  “Like Cinderella in spaaaaaace,” I joked, referencing Pigs in Space from The Muppet Show.  “Why not?” she said, and I realized it was a valid question.  Due to scheduling conflicts, I had to write the story in the last three weeks before the deadline, which is probably the fastest I’ve ever written a piece of fiction in my life.

Can you pick a favorite character from this story?
I’m biased towards all of them, and I do love my protagonist, Elsa, but I’d have to pick Bruno.  He’s an older, fatherly figure, and he’s a sweetheart with a steely edge to him.  I hope the readers love him as much as I do.  I’d love to tell more of his story one day.

What inspires your work? Where do you turn when you need a renewal of inspiration?
Good reading makes for good writing.  When I’m down to inspirational dregs, I like to revisit writers with a lot of energy: Ray Bradbury and Guy Gavriel Kay come to mind.  I enjoy incorporating pieces of reality in my stories, and a few of the characters in A Cinder’s Tale are loosely based on acquaintances of mine.  Ideas come from nowhere and anywhere, usually when I’m not thinking about writing.

What are your favorite and least favorite parts of the writing process?
Brainstorming is a lot of fun.  With A Cinder’s Tale, I had a blast sitting down and thinking up ways to include references to different versions of Cinderella.  Getting to know the characters in the early stages of a story is like getting to know new friends.  Least favorite: revisions.  By the time I reach that point, I’m invariably sick of the story and ready to move on to something else, and my perspective on the story is blurred by being too close to it.  Having others review it and provide constructive criticism is invaluable at that stage of the writing process.

Are you actively pursuing any other exciting writing projects?
I certainly am!  Fans of A Cinder’s Tale will be pleased (I hope) to know that I’m working on The Cendrillon Cycle, a cycle of novellas set in the same universe.  The next story, which follows Elsa’s life before she became a cinder, will release in December of this year.

Would you share a short snippet from A Cinder’s Tale? Something to entice us!
Absolutely!  Here’s a taste of chapter one.

Excerpt from
A Cinder's Tale
The substance that put hitherto-ignored Aschen on the map was cendrillon. Strong enough to withstand the tidal forces of planets and light enough to manipulate even in standard gravity, the material could only be found in the forged remains of a cthonian planet, a gas giant compressed and drained of its atmosphere. From such planets, named after the denizens of the Greek underworld, came the cendrillon to build better space stations, starships, and weapons. The galaxy could hardly spin without the stuff.
Pity it lurked in the hottest, most inhospitable corners of the worlds, Elsa thought. She maneuvered her coach closer to the pumpkin patch, avoiding the hottest spots, her eyes glancing from the heat sensors to the spectroscope on her console and back again. The patches harbored large concentrations of cendrillon; the temptation of a big ore haul lured many cinders to brave the dangers of explosive magma.
Her machine picked its way daintily over the lava flow, and Elsa edged the coach right up to the perimeter of the patch. Her spectroscope chimed obligingly. A lovely concentration of cendrillon lay just beneath her. Elsa deployed the collectors, watching as the arms descended from the body of the coach, plunged elbow-deep into the lava, and scooped up the heavier cendrillon beneath.
Dripping liquid fire, the collector scoops emerged again, dragging their burden into the body of the coach. Elsa’s gloved fingers hovered over the thruster controls as she kept her gaze on the heat sensors. She couldn’t stay in this position much longer. The first of the heat alarms sounded quietly just as the scoop arms completed their retraction. Time to go.
She slapped the thruster controls with a gloved hand, and her coach leapt into the air. The pumpkin patch exploded in a fiery splash, the superheated magma splatter just missing the underside of Elsa’s coach. 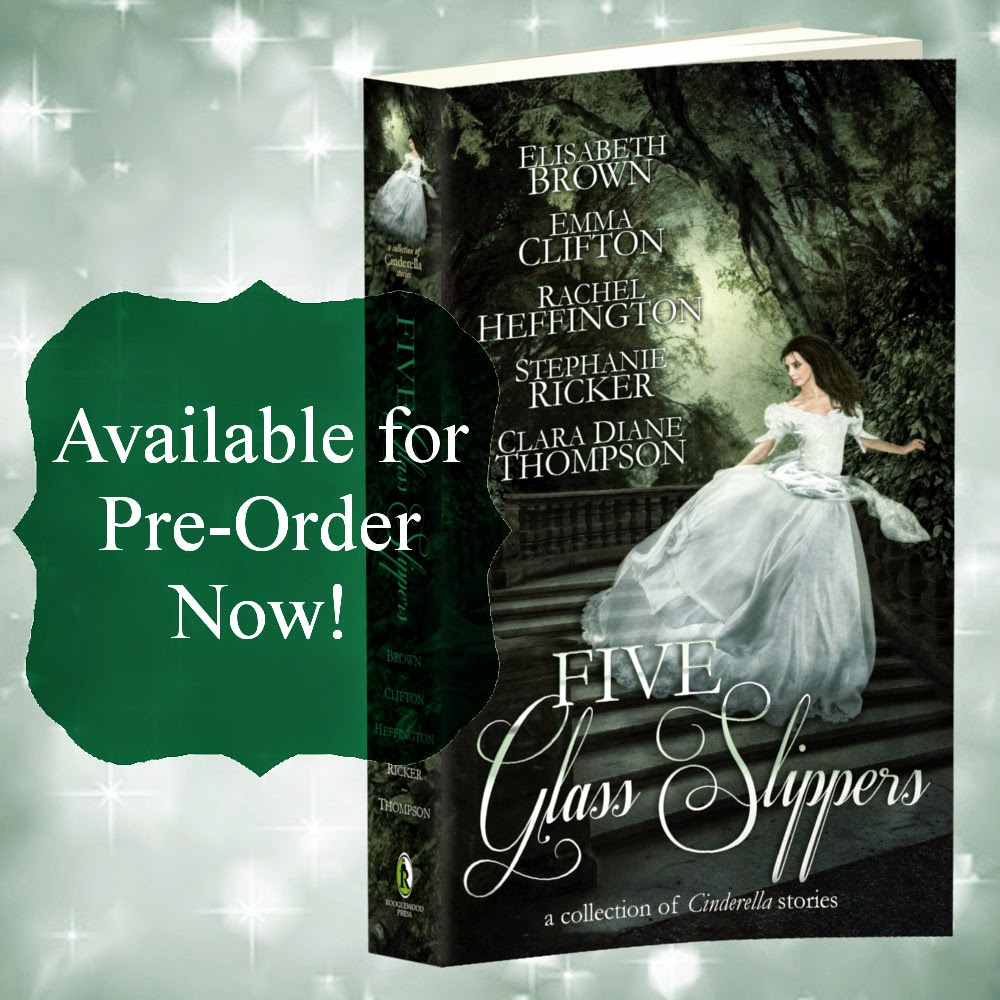 What did I tell you, dear readers? Isn't that an intriguing world? I hope you're as eager now to explore planet Aschen as I was when I first encountered Elsa in her coach above the lava-seething surface.
Be sure to come back and visit tomorrow with Clara Diane Thompson, author of The Moon Master's Ball, the final story in our collection. And in the meanwhile, do ask Stephanie some questions and leave comments below as you enter your name to win the Five Glass Slippers mug!
a Rafflecopter giveaway
Posted by Anne Elisabeth Stengl at 6:00 AM

Oh, I am simply salivating to read this story! Love how the references to the coach and pumpkin patch in the Perrault version of Cinderella were cleverly woven into the story. A neat twist to them! Sounds like such a frightening yet intriguing world.

Do you have a favorite science fiction book you often reread? What about a favorite fairy tale?

Yay for Cinderella in SPAAAACE! I love Marissa Meyer's Lunar Chronicles, so I look forward to reading another sci-fi fairy tale remake. This one sounds totally awesome.

Question: What was the hardest part about writing A Cinder's Tale?

stephanie
what does sesquipedalian mean?
Jemma

Wow, the excerpt sounds really original! What are these pumpkin patches--lava balls or something?

This is such a unique twist to the Cinderella story; the excerpt was really intriguing, too. ^.^

Can't wait 'til this book releases!

This is a question I've always wanted to ask a science fiction writer: how much scientific knowledge do you require to write?

Whoa, so many comments! I apologize for the response delay; I've been travelling all week for work.

@Meredith: Thank you! There are many more Cinderella references to find in the full story. Dune by Frank Herbert, the Ender's Game series by Orson Scott Card, and Fahrenheit 451 are some of my favorite science fiction books. As for fairy tales, I really can't pick; I grew up reading so many of them, it's hard for me to choose just one!

@Sarah: Oo, I've not heard of the Lunar Chronicles, but they sound intriguing! The hardest part about writing A Cinder's Tale was finding the time to actually write it. I work a couple jobs and am usually going in 17 different directions at once, so I pretty much just had to force myself to sit down and get it done.

@Jemma: Sesquipedalian means given to the use of long words, or a word of many syllables. One of my favorites!

@Hannah: You'll have to wait to read the story to see! :)

@Blue and @Emily: Thanks, you two!

@Galadriel: Both! I love black tea, green tea, white tea, herbal tea...you name it, I'll put it in hot water and drink it.

@Allison: I think it varies a lot depending on the writer. Some authors write "hard" scifi, meaning it's heavy on the science (Star Trek is an example), and others write "soft" scifi that doesn't rely too heavily on scientific principles to tell the story (like Star Wars). I lean towards the softer scifi, but I still do a LOT of research on different topics to make sure that the story is plausible, even if not completely scientifically accurate.