F is for Fionnghuala Lynn

It means "White Shoulder Waterfall" and is Gaelic. Believe it or not, most of the weird names from my stories are not "made-up" names at all, but come from our own world. All the Rudiobans, for example, are Gaelic-named since I based their entire world off of the our-world mythology of Iubdan and Bebo, king and queen of the leprechauns. 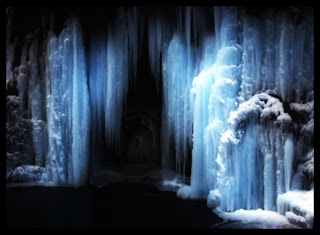 In the original mythology, Iubdan and Bebo dwell in their feasting hall Mag Faithleinn, which can only be reached by mounting Iubdan's tiny golden-yellow horse and riding it across the sea.  In my own story, I changed the sea to a lake, and I placed their feasting hall--known as the Hall of Red and Green--inside Rudiobus Mountain.

But to enter Rudiobus Mountain, one must pass through the waterfall gate, the Fionnghuala Lynn.

One by one, they crossed behind the white mist of the Fionnghuala Lynn, the great waterfall cascading down the frozen mountainside. (Moonblood, p. 234)

It is winter when Lionheart, as led by Eanrin and Oeric, arrives in Rudiobus. Even Eanrin, a denizen of Rudiobus, expresses some surprise at this. "I confess," says he, "I was not expecting Winter to be paying a call just now. Last time I visited, everything was awash in Summer. Ah well." (p. 233) Time is not, after all, a fluid cycle in Faerie worlds.

But winter, now it's come, is surprisingly sharp and cold. Cold enough even to stop the flow of Fionnghuala! "Lionheart leaned his head back against the wall, which was damp with spray from the waterfall. Droplets fell on his face, like stinging kisses they were so cold. Even the waterfall was freezing now." (p. 260)

Moonblood gave me many fun opportunities to explore new and picturesque Faerie demesnes. This one, however, was probably my favorite. I have written short stories and even ballads about Rudiobus, the Ruaine Hall,  and the waterfall gate of Fionnghuala Lynn for years before I started writing the novels you read now. And the chance to see them now in print, my characters moving to and fro about haunts so familiar in my imagination, is more thrilling than you can imagine!

So what did you think of Rudiobus and the waterfall gate? Would you be interested in visiting the home of the Merry People yourself? Maybe not when Winter is paying a call . . .

I'll tell of days before the fall,
Before the songs of fire
Spilled from the mouth of Hri Sora
In ruin and desire.

So long ago, so very long

It seemest to us all
When Iubdan did welcome men
Beyond the Waterfall.


For then the Merry Realm was free
From gloom and mists that hide
It now from evil, hunting eyes,
And welcomed all inside.


Iubdan Black Beard wise did rule
With Bebo his fair queen,
And laughter filled the M
Song filled the Hall of Green.

Then guests from many far off realms
Were treated by the king,
And when at last they journeyed home
Amazing tales they’d bring

Of Iubdan in his great hall
All hung with pine and holly.
Of Bard Eanrin, Chief Poet,
Who told them tales so jolly.

They spoke of maiden Gleamdrené
Who stood by Bebo’s chair.
At every feast in Ruaine Hall
The queen’s gold cup she’d bear.
(Taken from a bit of a ballad I wrote back in high school concerning Rudiobus.)
Posted by Anne Elisabeth Stengl at 6:00 AM

Love the poem! :)
And when I saw the picture of the waterfall, I thought instantly, "WOW, that is GORGEOUS."
Did you draw the picture?

I liked how you made it winter there. It seemed as if all the other realms WERE in spring, er summer, and it was nice to see such a nice contrast.

I also liked your poem.

Thanks, girls! No, I didn't paint that picture, though I wish I could claim it as one of mine! Isn't it gorgeous? It simply looked so much how I picture Fionnghuala Lynn in the winter that I had to post it. :)

It is REALLY gorgeous. Like one in my own fairytale story dreams.

The painting is beautiful! And I love the ballad! :)