B is for Bebo 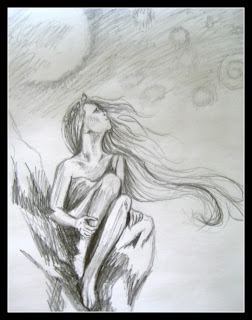 We started this series two days ago with one queen. Allow me now to continue with another!


Queen Bebo, King Iubdan, (and the golden mare gate-guarder of Fionnghuala Lynn) are among the few fairy tale figures I have lifted directly from our-world literature and placed in the Tales of Goldstone Wood. They were some of my very favorite fairies (as seen in this article), and I could not resist the charm of them and their Merry People!


However, despite their names and some strong similarities to their original legends, I have taken both Bebo and Iubdan in my own direction as fitting for Goldstone Wood. Bebo especially has acquired a greater dignity and presence in this new setting than she enjoyed back in her folklore days.


My Queen Bebo, you see, walks in the Gardens of the Moon.


The night sky itself spread below [Lionheart], an inky-black landscape unbroken but for a few straggling clouds. Stars bloomed as the brightest flowers around him, and the world, wherever it was, was far from sight. Lionheart stood on the top of Rudiobus Mountain in the Gardens of Hymlumé,. And Hymlumé herself was so bright and so near, he thought she would blind him. (Moonblood, p. 248)


To this place of imposing perspective, Bebo leads Lionheart, my unfortunate protagonist. And there she asks him to look upon the wonders of the Spheres, to see the very face of the Moon in all her glory . . . and there, perhaps, to know himself a little better.


Queen Bebo hears the Songs of the Spheres more clearly than others do, better than her husband or all the Faerie Folk of the Far World. She hears them singing all the time, and therefore, she is a woman who speaks many prophesies, telling others as she chooses what the Sun, Moon, and the Stars sing to her.


Iubdan Tynan may be king of Rudiobus . . . but his queen is far more powerful than he!


Bebo turned her childlike face to [Lionheart]. She was, he noticed, eye level with him. Queen Bebo might be small enough to stand in his hand, yet she could also look him in the eyes; and, he realized with a start, she could also loom far above him, towering like a giant with a majesty of age and wisdom he could never hope to match.


He would not meet her gaze.


"Take my hand," she said softly. He obeyed. Her fingers were small and delicate, and they could crush every bone in his hand without a thought. "Now can you see Hymlumé's face?" (Moonblood, p. 248)


So Bebo tells Lionheart the prophesy of the coming Night of Moonblood and the fate that awaits him should he so choose.


What are your thoughts on the golden-haired Queen of Rudiobus? Would you follow her up the long stair to stand in the Gardens of Hymlumé? What might she say to you?
Posted by Anne Elisabeth Stengl at 6:00 AM

i like Queen Bebo; she is brave and from your illustrations, very pretty (in veils of course). I thought is was SO brave of her to release Lionheart, although she knew that she would die.
I would totally follow her up to the long stair, although I'm not quite sure what she would say to me. :)

YES! I love this A-z thing. It's actually what made me countinue reading the tales of goldstone wood (now one of my fave series). I love learning more about your characters and places!

I like Queen Bebo. Love the illistration you have for her! I would probably follow her up the stair, I haven't a clue what she'd say to me :D