Since the time of the ancient Babylonians, dragons have been hugely important literary figures. There's a reason why they still hold such a significant position in literature still today. So I am beginning a new series in honor of these dreadful, dangerous, beautiful, classic characters. At least up through Christmas, I'm going to feature a famous dragon every Tuesday. Hope you will enjoy learning a little more about these grand old fellows!

To start us out, we'll begin with one of the most influential dragons of them all. 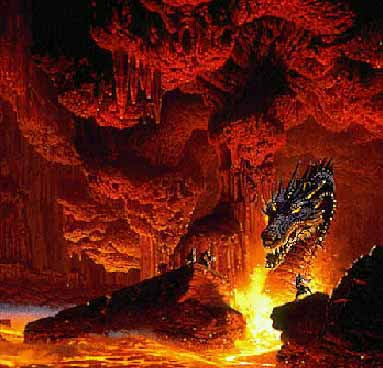 Also known as: Fafner and Frænir


Fáfnir is the classic gold-hoarding dragon. He started life as a dwarf prince, son of King Hreidmar and brother Regin and Ótr. Later, poisoned by gold-greed, he became a dragon.
Fáfnir's story is part of old Norse Mythology, and as such, is pretty grim. His brother, Ótr, a shape-shifter who had taken the form of an otter, was killed by the prankster god, Loki. King Hreidmar, furious at this evil worked upon his son, made Loki fill the dead otter's skin with gold.
But Loki didn't fill it with just any gold; he used gold he had stolen from another dwarf, Andvari. Loki included the ring, Andvaranaut, which is capable of producing more gold. But its former owner, Andvari, had cursed the ring and the rest of the stolen gold, saying that it would bring destruction to any who owned it!
Such was to prove true, first for poor Fáfnir, later for other heroes of old. Fáfnir coveted the gold Loki offered. So he killed King Hreidmar, his own father, and took the otter skin of treasure for himself! His greed transformed him into a dreadful dragon so that he could better guard and hoard his precious gold.
But Fáfnir's other brother, Regin, wanted the gold for himself. So Regin sent his foster-son, renowned Sigurd, to take the gold and kill the dragon. Sigurd went about this in a distinctly non-heroic fashion . . . he dug a pit in the path that Fáfnir crawled to get to water, hid inside, and waited for the dragon. When Fáfnir came lurching and lumbering by (as dragons are wont to do), Sigurd stabbed him in the left shoulder, mortally wounding him. 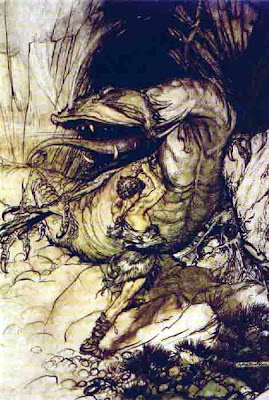 One of the most famous images of Fáfnir, painted by Arthur Rackham.
Because it's a grand old legend (practically begging Richard Wagner to make it an opera), Fáfnir didn't die until he'd had plenty of time to say a piece. He found out that his brother had sent Sigurd and proceeded to warn Sigurd that all who possess the gold will perish. (Which was rather decent of him, when you think about it. I probably would have just said: "You want my gold so much? Take it and enjoy it . . . while you can! Mwaa haa haa!")
Sigurd, being a hero in the classic sense (i.e. none-too-bright), takes the gold anyway, and much drama ensues. But Fáfnir's sad story ends here.
It's interesting to note that Fáfnir is not considered a universally Bad Guy. Jacqueline Simpson, in her British Dragons, says: "Fafnir, whom  Sigurd the Volsung (Siegfried) slew, was not only a treasure-guarding dragon but also a wise and powerful being, whose flesh gave anyone who ate the power to understand the language of birds, and whose blood conferred invulnerability" (p. 30).
In Germanic mythology, dragons were not the overt symbols of the Devil they later became. They were frightening, sure, and often at odds with the hero. But they weren't necessarily evil. Fáfnir obviously was a flawed character from the get-go for the enchanted gold to work such evil on him. But was he any worse than acclaimed Sigurd, who also murdered to take the gold? Probably not.
Fáfnir has certainly left his mark upon dragon literature! His gold-hoarding was likely a huge inspiration both for Tolkien's Smaug and Lewis's transformed Eustace (who turns into a dragon while greedily lusting after dragon-gold, rather like Fáfnir).
As stated above, he found his way into Wagner's enormous monstrosity of an opera. In that story, he began life as a giant rather than the dwarf and was called Fafner.
Sadly, he also found his way into comic book land. And looks like a Godzilla-wannabe. How are the mighty fallen!
I first encountered Fáfnir in Greg Hildebrandt's Favorite Fairy Tales, illustrated to glowing perfection just as Sigurd is stabbing him. A gruesome, gory, gold-lustful story.
I was ten. I loved it!
Fáfnir on a scale of 1-10

Evil:   7
Definitely bad, but not so bad that he didn't warn the hero about the cursed gold.

Scariness:  8
Fáfnir is nothing if not frightening! Did you watch that opera link?

Poison:  8
Fáfnir poisons the land in order to protect his gold.

Hoard:  6
He's got a nice hoard (including a cursed ring). But still, it only fits in an otter's skin.

Cleverness: 4
I mean, he crawled right over a man with a sword. Oops.
Posted by Anne Elisabeth Stengl at 8:35 AM

This post made me chortle. In hero- and villain-training, do they teach "How to Give An Effectual Death Speech"? I guess it would be a one-time course...

Norse myths are so complex and confusing; they make Greek mythology look quite tame. There are so many characters with difficult names, not to mention all the shape-shifters and monsters to keep track of. Writers like Tolkien definitely pulled an immense amount of inspiration from it, though, and I find it interesting how much he blatantly stole from myth.

I'll look forward to the other dragons in this series! Do you intend to do only those from ancient myth, or from more modern literature as well?

Oh, you know, I wouldn't say he blatantly STOLE from myth . . . more like, he was blatantly INSPIRED BY myth! :) Which is, yes, a fuzzy line, but I think forgivable, in the same way that all Shakespeare's literary thievery is forgivable. After all, some people have accused me of "stealing" from FAERIE QUEENE, so I have to give Tolkien some grace!

I'm starting with the old mythological dragons (and certainly not ALL of those . . . probably just the more popular fellows like Fafnir). But I have plans to highlight some of my personal favorites from contemporary literature as well! So many interesting dragons to pick from.

Anyone in particular you'd like to see me write up?

Ah, yes, that fine line between stealing and being inspired. What's that quote by T.S. Eliot? "Good writers borrow. Great writers steal." So true. And they say that imitation is the best flattery... I personally like it when it's obvious that a writer is inspired by The Greats.

Were you going to do the dragon from Beowulf, by any chance? There's not a lot about it in the poem, but what little there is just screams "THE HOBBIT!" (or The Hobbit screams Beowulf). Not being well-versed in dragon lore, however, I'll be glad to just learn from what you produce.

I loved that comment, Abigail. Yes, that one be a one time class--unless you're a Time Lord or a Tolkien Elf or something like that...