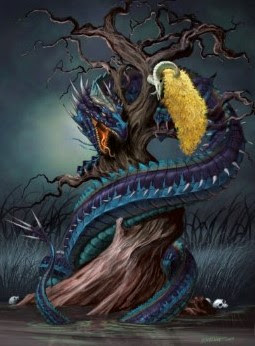 This dragon was actually more of a giant serpent in the tradition of the "dragons" found in the most ancient dragon-centered texts, the Hindu Rg Veda, and the Babylonian Enuma Elish. Doesn't make him any less of a dragon, though!

This dragon, as seen in the picture above, guarded the Golden Fleece that Jason (of Argonaut fame) set out to find. Like most dragons in epics, it  met an unlucky fate. Some stories say he was put to sleep by drugs the sly Medea fed him. Others claim that Jason killed him.

The dragon didn't necessarily go down without a fight. One story, painted on an old vase, says that the Colchian Dragon devoured and regurgitated Jason before the hero had a chance to kill him. 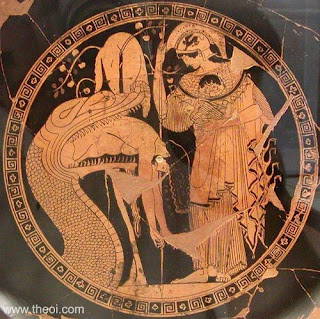 Drakon: "Bleh! Heroes is nasty!"
One way or the other, the poor fellow ended up dead, and Medea's charming father, King Aeetes, harvested his teeth. From those teeth, fully-grown warriors grew! So, in this one way at least, the Drakon Kholkikos lived on.
It is interesting to note that Dragon Kholkikos had a close relative (not literally, more literarily), Drakon Ismenios, who guarded a stream near Thebes. This dragon also lost his teeth, poor fellow, and from those teeth there also sprang warriors.
I must confess, I was a pretty confused cookie as far as this dragon was concerned for many, many years. You see, my first experience with the Golden Fleece saga was this movie from the 1960s: 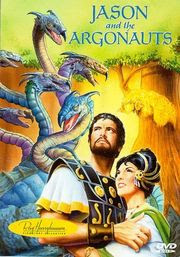 Now, you can see from the cover that the guardian of the Golden Fleece is the Hydra (a multi-headed monster from Greek mythology). So I--8 year old innocent that I was--blithely assumed for years that it was the Hydra who guarded the fleece. 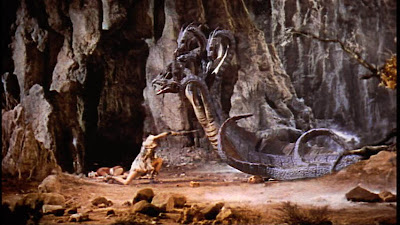 I also assumed that the Hydra must have given up his/her teeth, which were subsequently planted, producing these charming fellows: 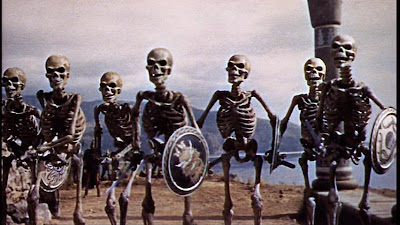 Oh, Ray Harryhausen! How you have misled me!

So now, hopefully, you won't make the same mistake I did. No Hydras, and no grinning skeletons. Just a serpent and some pretty basic warriors.

Drakon Kholkikos on a scale of 1-10
Evil:  1
I mean, he's just doing his job! It's Jason and Medea who are the traitors, murderers, and thieves. Hoorah for Greek heroes.
Scariness: 7
He's pretty scary, I guess, but I think his teeth-sprung warriors might be more frightening than he is.
Poison: 1
He's a snake, so he might be poisonous. But he's so big, I suspect he's more like an anaconda than a viper. Just saying.
Hoard: 8
Quality vs. quantity. After all, heroes were willing to cross the world and risk their lives to achieve the Golden Fleece!
Cleverness: 2
If he had been truly clever, he wouldn't have spit up Jason after swallowing him, no matter how bitter a pill he was to swallow!
Posted by Anne Elisabeth Stengl at 8:07 AM

lol! Anne, you weren't the only one misled by Ray Harryhausen! I always thought it was a hydra guarding the fleece too, until this post!

Yes, I had to watch 'Jason' in global class in ninth grade. I do remember the things you are talking about-it was very misleading. The dragon who guards the golden fleece turns up in the Percy Jackson series, along with the teeth warriors in the Heroes of Olympus.

Christa here!
Those skeletons remind me of Stalfos from the Legend of Zelda series.

the warriors showed up in the Titans Curse not the Heroes of Olympus.