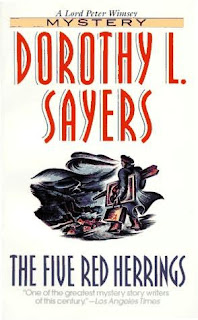 I guessed who done it.

Okay, okay, it took me most of the book to figure it out. And no, I didn’t actually piece it together using subtle clues dropped by the much-more-brilliant mind of Dorothy Sayers. I simply have a little bit more knowledge of Sayers and her work than I used to, so my sleuthing was based off of what I have come to expect of the author rather than the story itself.

Besides, Ms. Sayers, I have a bit of a gripe with you. You purposefully—purposefully!—withheld the key piece of information!

Dearest Lord Peter Wimssy, early on in the story, tells the police officers that they must search the scene of the crime for one particular object. He tells them what that object is, and the proceed to scour the countryside for it. The whole solution to the mystery rests on the location of this one object. But we, the reader, aren’t told what the dragon-eaten thing is!!! Not until, like, the second to last chapter of the book! Maddening!

Not that I would have been able to put together any sort of a solution had the knowledge been handed me on a silver platter. Nope. Darling Wimsey (and his creator) remains forever my intellectual superior, and I bow to his genius (and hers).

Nevertheless, lack of Sherlockian-skills aside, I did actually manage to guess who the murderer was before the great revelation was given.

You see, four weeks before my wedding last summer, I returned to my native haunts in the forgotten wilds of Wisconsin and lived deep in the quiet Northwoods among the woodland creatures (and brothers) while awaiting the arrival of my Beloved. I was dead bored. I also caught rubella, so I was all over red spots and wanting to die . . . except dying meant not marrying Rohan, so I decided to struggle on.

During this interval, when I wasn’t languishing in fever (or experiencing feverish dreams about Rohan’s ‘secret wives’ . . . it’s amazing what your subconscious will concoct and batter you with on the eve of your wedding!), I was reading mystery novels. I’d never particularly read the genre before, other than my Sherlock Holmes craze in high school, and I was surprised to find how much I enjoyed it! I read my first Agatha Christie novel, but must admit that Dorothy Sayers proved herself the superior author. In short order (and completely out of order), I read Strong Poison, Murder Must Advertize, Gaudy Night, and some other that I can’t quite recall at present.

I think I will always associate those weeks before my wedding with murder mysteries . . . and rubella.

I cannot say enough about Ms. Sayers’ genius. If you haven’t read her, do yourself a favor and give her a try! She’s stylistically much more complex than Christie, and her characters are that much more satisfying. Especially dreamy Peter Wimsey (whom I cannot classify as a literary crush since I did not truly encounter him until the few weeks before my wedding, during which time all my romantic sensibilities were thoroughly occupied elsewhere. I did, however, see a lot of similarities between Lord Wimsey and my handsome Rohan, which I continue to see to this day. Perhaps that counts for something).

Anyway, all that to say that, while her methods and inventiveness still boggle my inferior mind, there is one, tiny, almost unnoticeable trend in her work that I did manage to pick up on. There is a particular type of character that she likes to make her villains. And, I’m sorry to say, I can’t tell you what that type is because the LAST thing I want to do is spoil any future Sayers books you might pick up! What’s more, even though I knew the type, it still took me a good three-quarters of the novel to finally pick my criminal candidate.

So, I must declare The Five Red Herrings an excellent read and give it a high recommendation! You might want to try to pick up the Wimsey novels in order, though, starting with Whose Body. I’ve been reading them completely mish-mashed and enjoyed each one thoroughly . . . but I can’t help but wonder what the experience would have been had I taken a more conventional route.

Now, on to the next read.

I told my Rohan that I wanted something different. He has a large selection of paperback fantasy that he brought to the States from Sri Lanka, so he took me to our Rooglewood library, selected one, and handed it to me.

"I already read fantasy,” said I.

“Is that a grendel and an elf in a diner?” said I.

“Actually look at the cover, sweetie,” said he.

“Shall I make you an appointment with an optometrist?” said he.

I have never read an urban fantasy. Never in my life! Can you believe it? So here’s to Rosemary Edghill for providing my first portal into the world of urban fantasy, and may it be an interesting, enlightening, and (hopefully) entertaining experience!
Posted by Anne Elisabeth Stengl at 9:00 AM

I love mysteries and this one sounds good. I always guess whodunit. I don't know if it's because I'm a writer or an avid reader or both. Since I haven't read anything by her before, maybe I won't guess at all!

Did you really have rubella before your wedding?

Hehehe, I certainly did. I was quite the picture with red rash all over my body! I definitely had some fun mental pictures of how I was going to look in my wedding dress . . . but it all faded before the wedding, and I was feeling practically human by that time! And it makes for an excellent story now.

If you're a mystery reader/writer, I think you will love Dorothy Sayers. I wasn't wild about her the first time I tried her (freshman year of college), but these days I am a die-hard fan. The woman is brilliant, not just in her mysteries, but in the beautiful way she writes them.