I keep meaning to write up another literary-type post on writing theory . . . I even have one halfway written! But I have just been too distracted lately to get back to it. Mostly with rewrites on Book 3 in Tales of Goldstone Wood.

But also with kitten work! 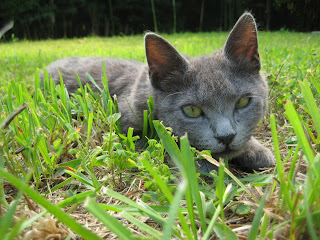 She is a feral kitten who lost her mother and her sibling while still very young. Soon after, she started coming regularly to visit me . . . unusual behavior for a feral cat. They are usually completely wild and want nothing to do with people. But she started watching me from a distance while I worked in the garden, demonstrating a shy willingness to make friends.

So I started feeding her. And I would sit in the yard and talk to her, making gentle sounds and getting her used to my voice. 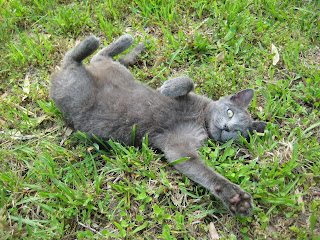 Pretty soon, I had her almost completely comfortable with me! She still isn't wild about being petted (though she'll let me pet her while she eats), but she loves to play and will often press up against me while napping. Lately it's been too hot for that, so she's gotten a wee bit standoffish. But she still comes running whenever I call her, eager to play and socialize. 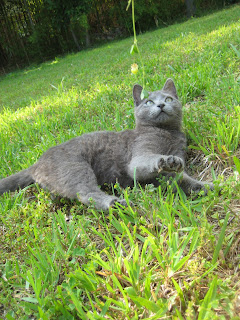 This is her glamour shot, above. I think she looks really pretty!

I started looking around for a permanent family for her a few weeks ago. Because she is feral and has little to no familiarity with people, I was concerned that I wouldn't find anyone willing to take on a project like Maya! But, after much prayer, a family came along ready and willing to give her a chance. They've already done well by giving her such a pretty name (I was calling her 'Mabel,' which isn't as romantic). 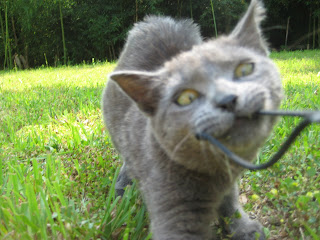 "My camera cord!"
But the work isn't over just yet. I want to get her at least a little prepared for life as a housecat before sending her over to her new family's house. So yesterday evening, I caught Maya and brought her down for some time in our basement to get her used to being indoors and to train her in how to use a litterbox. The poor little thing is so scared! It breaks my heart a bit. She's never been indoors, so there are a lot of scary smells. But she is eating well and has a comfortable bed that Rohan bought her, so I am hoping she will adjust quickly. 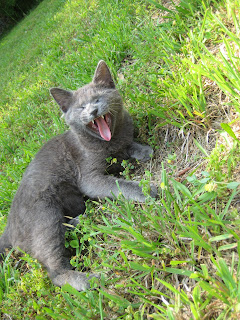 Big yawn!
In a week and a half, she has her appoint to be spayed. Then she will be off to her new home and, I do hope, a happy, comfortable life as a housecat. Not entirely certain how I'm going to transport her to the vet (she's now shy of the trap I caught her in . . . and I don't blame her!). But we'll cross that bridge when we come to it.

So, if you think of it, say a prayer for little Maya that she'll have a smooth transition into her new life. Then, when she is settled, there is this pretty silver tabby starting to come to my door. A pretty tabby who is obviously pregnant. Might be I have another project coming in the near future . . . .
Posted by Anne Elisabeth Stengl at 1:09 PM

oh i am so glad we aren't the only ones who take in feral cats!!! good for you and good for mya and your new little brood. the only difference is we can never find homes for our cats and now we have 15 running around here (only 5 are actually house cats, tho)

keep up the good work and i love your books! thanks!

Congratulations on a new family for Maya! What a fun story. Toby and Lucy wish her all the best! Toby, especially, is jealous of her outdoor freedom. ;-)

Thanks for the encouragement, you guys! It's been an interesting process for sure. I used to work cat rescue back in high school, but it's been a long time since I worked with a kitten this wild! She's doing really well, though. Perfectly litter box trained already, getting comfortable with her new surroundings, enjoying all her toys . . . and her new mama came to visit her yesterday, and they had a fun time together! Makes me happy. I like seeing a kitten well placed in the right home. :)

Awww! The kitty's so cute! I hope she adjusts well to her new home!