Dear Imps, something exciting is brewing in Goldstone Wood . . . 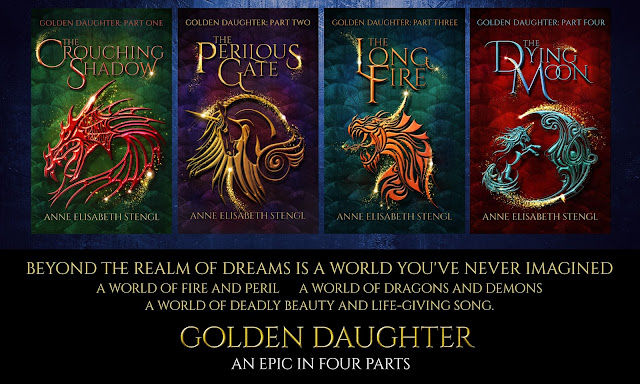 I have to say, I'm a huge fan of these new covers. This year in particular I have received NUMEROUS emails from male readers who love the series but who almost didn't read it simply because of the incredibly "girly" covers (except for Dragonwitch. That one has a great cover, we all can agree).

Sadly, though I am in complete agreement with the poor guys--who just want to be able to read an adventurous fantasy novel without getting funny looks from people--I have no control over those first six covers. But Golden Daughter is a different story . . . and after much discussion (and a little debate) with my people at Rooglewood Press, we decided a re-launch the book as a stand-alone serialization, with new covers.

Also, we're offering them as a special this weekend: 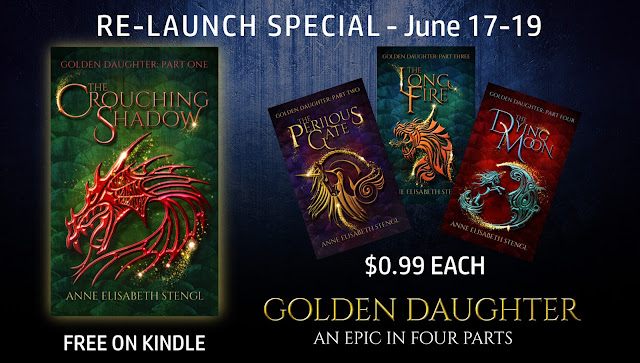 Even those of you who have already read it might want to go ahead and download that first FREE book . . . just to see the gorgeous, full-color MAP, painted by amazing German artist, Frank Rene Stark (who also happens to be a Goldstone Wood fan). This map is currently exclusive to the re-launch edition, so grab it for free and enjoy all the many gorgeous details!

And . . . all right, I know this sounds like a broken record . . . but if some of you who have read Golden Daughter wanted to write up short reviews for these editions, it would be SO appreciated. I would love for new readers just discovering the story and series through this edition to see some of the enthusiasm you devoted Imps feel for these characters and adventures. Reviews don't have to be long or complicated. Even single sentences are perfectly acceptable!

Anyway, I'm glad to be able to share this fun new endeavor with all of you, and I hope you love those new covers as much as I do! My personal favorite is The Long Fire. My husband's favorite is The Dying Moon. Which one do you like best?
Posted by Anne Elisabeth Stengl at 8:42 AM

Oh my goodness, the new covers are SO beautiful, I love them! I think my favorite is ... oh, it's so hard to choose! Maybe Perilous Gate? I'm not really sure, I love The Crouching Shadow too :).

I love the new covers. Will they be in print?

So exciting!! I adore the covers for THE PERILOUS GATE and THE DYING MOON (though, of course, they're all simply gorgeous)!! :)

It's so hard to choose, but THE PERILOUS GATE is my favorite. I love that gold unicorn on the purple/blue background! But like Olivia said, they're all gorgeous!

I downloaded The Crouching Shadow and my, that map is gorgeous! I love it!

I've always been fond of the original covers for the Tales of Goldstone Wood, but I can totally understand the "guy thing" :) Anyway, out of the new covers for Golden Daughter, I think The Long Fire is my favorite, with The Perilous Gate coming in second. I really love the colors!

The new covers are GORGEOUS!

I love these covers so much! I think my favourite would either be Perilous Gate or Dying Moon

My favorite is either the Perilous Gate or the Crouching Shadow. The other two are amazing as well... hmmm... How can I pick only one?????
Oh, have you seen the Silmarillion Awards? They're pretty awesome, and tons of your characters are being nominated and seconded for the various awards. I think that possibly the only category that doesn't have a character of your is the 'epic mount' award.

Beautiful covers!!! I love them all! The colours are all so pretty!!