So I mentioned in the last Doings at Drakenheath post that I had some "interesting news" concerning Poison Crown. Specifically concerning its release date. The time has come to fill you in on this little detail . . . 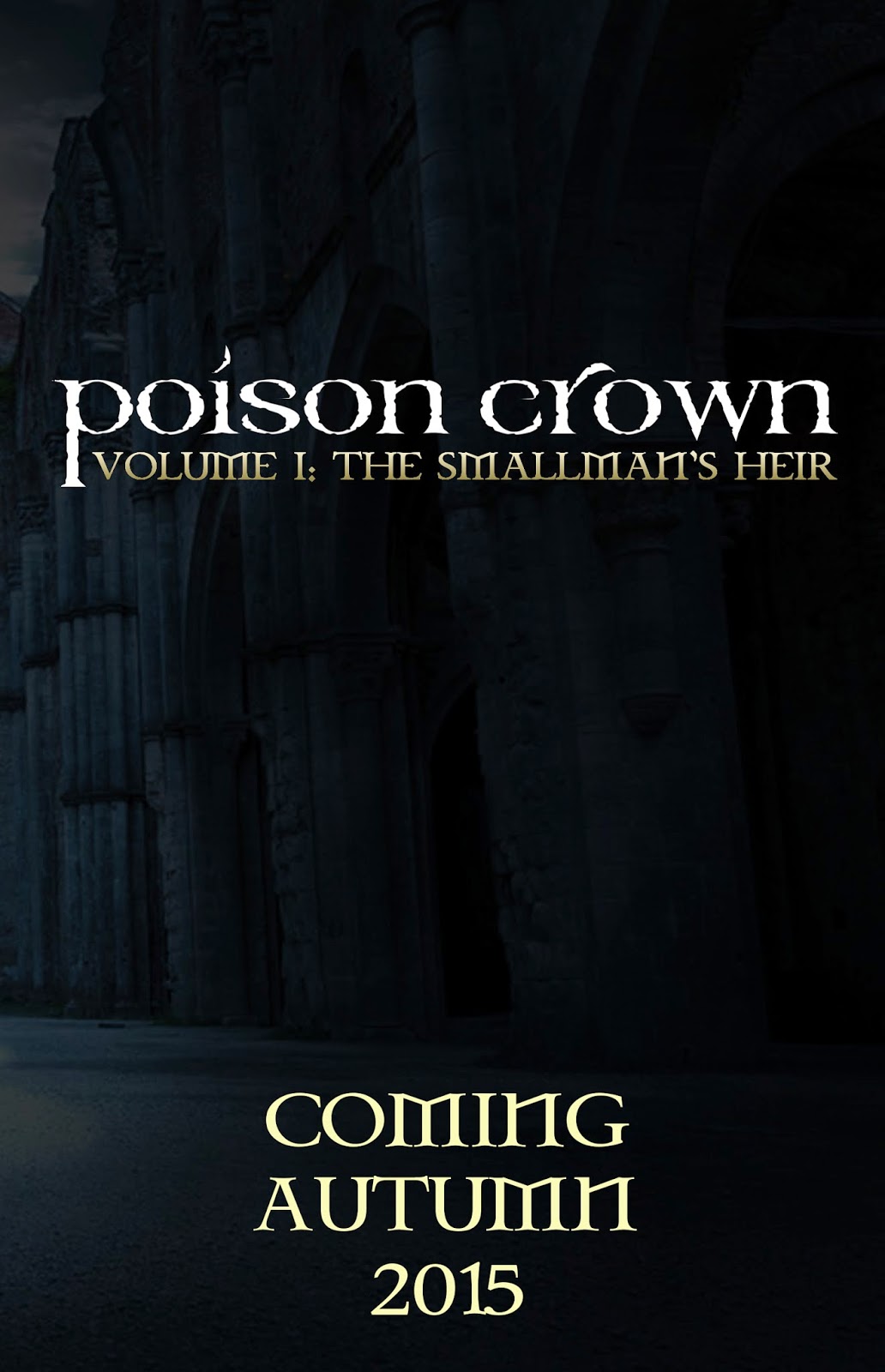 You know how I said that Book 8 in the Tales of Goldstone Wood would be the last one for a few years as I take a short break? Well, that's still true. But not entirely true. Book 8 will be the last book for a few years, but Book 8 is going to be split into two separate large volumes.

The answer to that is yes . . . and no. Poison Crown is still really one big story. Unlike Veiled Rose and Moonblood, which are heavily connected by characters and carry-over themes, but which have two separate plots, climaxes, and resolutions, Poison Crown volumes I and II will be all the same story. You will need to read both of them in order to get the whole of the book.

That being said, Volume I has its own mini-climax and a pseudo-resolution. Though really the "resolution," so to speak, is just gearing up for the continuation of the tale in volume II. 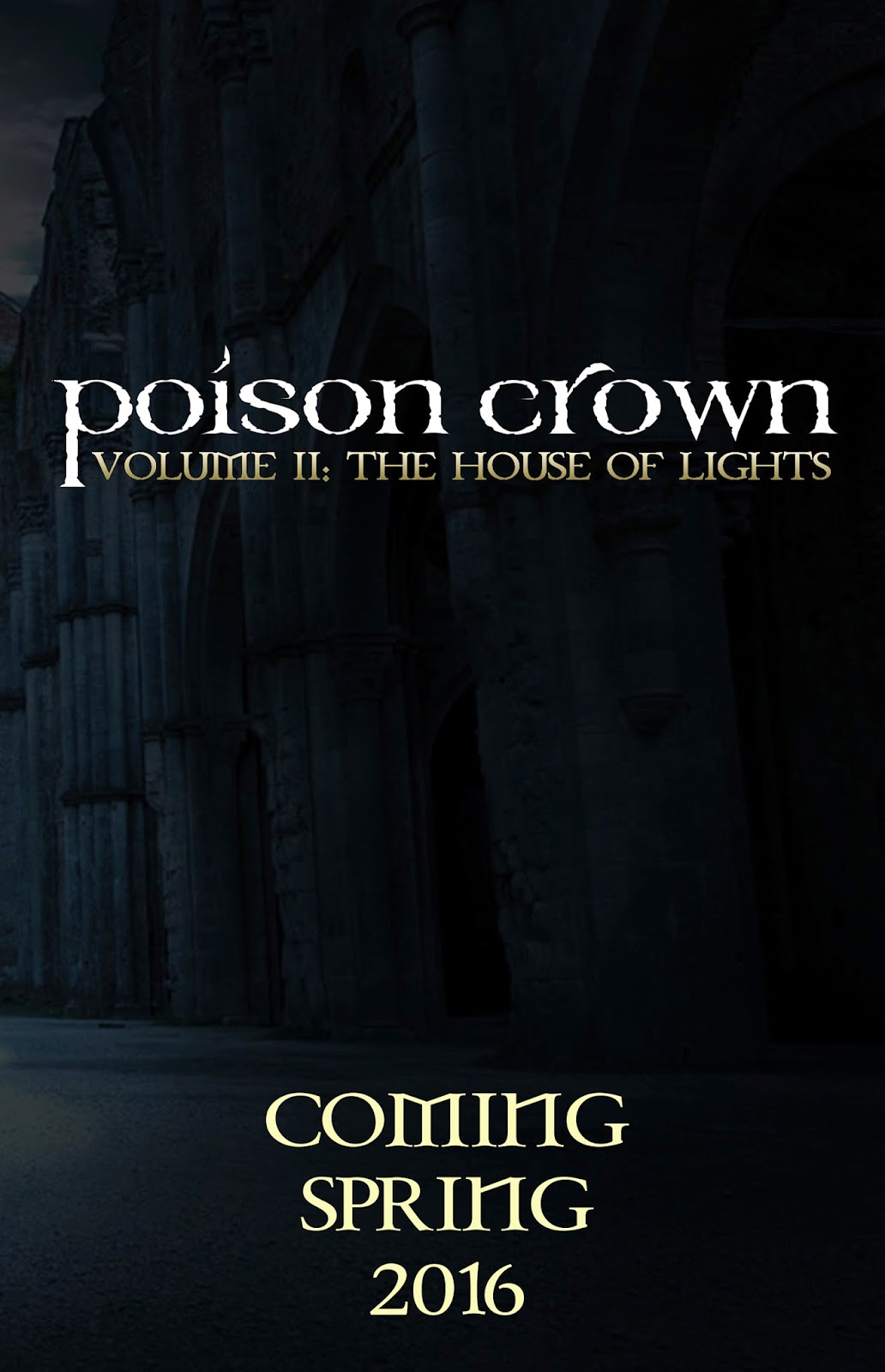 The reasons for this decision are numerous, but I shall try to explain a few of them.

First of all is the simple issue of size. As I was writing along on this project, nearing the end of what will now be volume I, I decided I should stop and do a calculation to estimate the final length of the entire project. And I realized that, at the rate I was going, this book was going to end up 300,000 words long.

For one thing, it would be a BRICK to print. Too big for the trim size, too big to hold comfortably . . . just too big! And very expensive on top of that. It would also be terribly intimidating, I suspect. Anyone looking at it would think, "Wow! That's more book than I have time to read right now." I mean, we're talking a book that would dwarf Golden Daughter in size . . . by a long shot!

I played around with shortening the story itself, but all shorter versions of the tale came out thin and under-developed, requiring me to eliminate or significantly downplay important characters, not to mention rushing along important story lines. No, no. The story is what it is and will need space to be told in the proper word count.

So then we began to brainstorm what it would look like to split the book into two 150,000 word novels rather than one 300,000 word novel. All of sudden the whole thing made a lot more sense, and I no longer needed to compromise storytelling and development.

This is not unlike what you will commonly see among many popular fantasy novels these days. Most of the fantasy novels being published in CBA are trilogies, the first two books ending on cliffhangers or near-cliffhangers, the follow-up books picking up where the others left off. This is not what I ordinarily do--I prefer to have connective story threads and characters, but to see each book resolve its own internal plot. As much as possible, I try to write so that a reader could pick up any one of the Goldstone Wood novels and enjoy the story unfolding (though reading them all together provides the best, most satisfying reading experience).

So Poison Crown will be a little different for me. But I am writing the whole thing with the idea of it being ONE book in TWO parts.

This means that I am just now coming up on the end of drafting Volume I: The Smallman's Heir. This book will (Lord willing!) be releasing in November of this year, and Volume II: The House of Lights should follow shortly thereafter, hopefully sometime in March, 2016.

Oh, you know what else this means? Two different Poison Crown covers!
Posted by Anne Elisabeth Stengl at 6:00 AM

Whoa. WHOA. This is big. While I don't exactly mind books like bricks (then they can be used to bonk someone on the head if they said they didn't like it...bwahaha...), I'm really excited about this! And I'm very glad you're not going to sacrifice the development of the story. :D

I predict come November there will be a lot of people wishing it was March. :) Glad we get the complete story in all it's 300,000 word glory, even if there is a wait.
Yay for two cover reveals! :D

How exciting! I'm sure it's going to be perfect. : D

Sounds awesome! I had to do this with one of my novels because of printing restrictions. it ended up being 400 K words, so it would have been a brick! I hope to get the two parts printed someday, because the story has always been one book in my mind.

This is so exciting! Best wishes as you continue drafting this 300,000 word story. That is amazing! I dislike cliffhangers, (especially those that leave you dangling precariously), but will be super excited to see how these two books connect. Since I have to wait on Braille versions anyway, perhaps they'll both be ready in closer proximity to each other for me! Ha! And, I love the titles. I'll be praying for you.

Hmmm, I'm getting Lord of the Rings feelings here. The "brick" comment made me thing of my copy that is all 3-in-1 with all the appendixes and author notes. By the way I like bricks even is they come in two parts!

Looking forward to seeing the 2 covers and how they will reveal the story.

*picks jaw up from floor*

OH, ANNE ELISABETH! This is so exciting! I'm amazed and thrilled. A very fine idea indeed! And also, a bit consoling to us who thought November would bring the last Goldstone installment for a few years. And also--two more covers!!!!!

Wow wow WOW, am I excited! I'm glad you're making two volumes rather than sacrificing the story. And I love the subtitles--they're awakening memories of Dragonwitch! ;D

300,000 WORDS?!? Oh, goody. Fat books make me so happy. :P I can't wait to see both covers and read both volumes, although I'll probably have to reread the first volume before the second because chances are I'll forget some of the story in between. Actually, I'll probably just reread the whole series again. :)

Oh, the joy of large books!
oh the agony of far away release dates...

AaaaAAAAHHHH!!!!!! Don't worry! That was a good "AaaaAAAAHHHH!!!!!!"
I mean, I mean, WOW!!!! I am sososososoooooo excited for this! I don't know how I'm going to wait! I might go mad before then! Oh, Lume love me! I'm so excited! All the best of wishes for you, Anne Elisabeth! God bless you!

Now, out of curiosity, what is the average length of your books? I honestly don't know. :-P

Yeah... 300,000 words is crazy long... Robert Jordan length... which can be done, but I understand why you're choosing to split it up. My wrists thank you from the bottom of their little hearts. (Apparently my wrists have hearts...) LOL

:D
As the kind of girl who gets Brandon Sanderson's Stormlight Archive books at the library and then proceeds to get very excited over their sheer size, I would be perfectly happy with Poison Crown in one volume. HOWEVER, I'm also quite happy with the arrangement you've decided on- particularly as it'll slightly shorten the gap between Goldstone Wood books. :D

Ahhh! So exciting! Poison Crown will be so awesome!!!!!
Jemma

How very, very exciting!! This is a wonderful solution, and I am so glad you're not cutting away any good parts. :) I love the challenge of thick books, but I can totally see how intimidating it might be to someone new to Goldstone Woods! Best wishes as you finish them up! Can't wait for both cover reveals!!

*stares in disbelief* *swoons at the thought of TWO BIG, LOTR QUALITY BOOKS!!!* *imagines bonking little brother on head with one when he tries to annoy me ;)*

OH MY WORD!!
THIS IS SO EXCITING :D *Filled with much suspense*

As others have mentioned, this will be horrible for when we finish "The Smallman's Heir", and have to wait till March for the resolution! :P But it will be so worth it if we can have such an epic full-length tale in the end.

Also I am so excited by the subtitle names! Does Poison Crown have references to "Dragonwitch" tale?

I am delighted we're going to have 2 new covers for Poison Crown - golly, how will my fantasy bookshelf bear the weight of your glorious novels, Anne Elisabeth? I am so excited!!

(but I am not excited about the hitatius on the Goldstone Wood tales after that. . . *sob* how will we survive such a wait?! You will still be writing other projects though, won't you, Lord willing?!!!

Poison Crown is going to need two separate volumes? It sounds so epic! *bounces up and down with excitement*

Wow, I can't even remember the last time I was this excited for a book to come out, haha! I guess I'll be spending the time between the release date and now continuing to read my way through the rest of the series, which I am still head-over-heels in love with, by the way. (I'm on book 3!)

I have to say though, having just discovered the series this year, I'm a little sad to hear about the hiatus after Poison Crown comes out, but I understand. Plus, you obviously work so hard on these books, you deserve to take a nice break!

Anne Elisabeth, I wish you all the best in your current and future endeavors and I will continue to pray for God's blessings upon you and your family. You're a great lady whom I truly admire. :)

Personally, I'm glad you decided to split it. With my current schedule, I have a hard time picking up books that are as large and in-depth as yours because I just do not have the time to devote to fully enjoying the story. This way will help me out a lot.

Yeah! More to read! I was disappointed that there was a break coming up and so two volumes helps delay that break a bit:) Thanks!

I wouldn't mind 300,000 words all at once, but the suspense will probably make both volumes even better. Somehow I'm more excited than I was. Lol.

Anne Elisabeth,
I wanted to drop in and let you know that this was the most encouraging post I've read this week! I have a 300,000 word book with two parts, but it's one main story. I've been wondering if I should split it into two books for a long time, and this post was so encouraging to see you deal with a similar decision. :) It took a big weight off my shoulders to know it could be done!