To Love and to Loathe

Today's blog post is based on this reader-question: "What do you loathe and love about writing."

Most writers, if they are honest, will admit to sometimes absolutely hating that which they love most: writing. And those writers who don't sometimes hate writing probably aren't doing it right.

Good writing is a soul-baring exercise, and through the course of uprooting a story from the unwilling soil of inspiration, we must also uproot much of ourselves which we might sometimes like to remain hidden. Insecurity, for instance, and self-doubt. Fear of discovery . . . "Will this story reveal too much truth about me?" . . . or fear of misunderstanding . . . "Will everyone grasp what it is I'm trying to communicate to them?"

I think this is always the first step of loathing for me as I begin piecing the patchwork of a story. When I hit those snags of realization that I am just putting together plot-pieces. I'm just writing "characters" that do "character things"--like shrug when they're confused or bite their lips when they're frightened or (if they're heroes) run their fingers through their hair as a means to communicate whatever emotion finger-through-hair-running communicates. 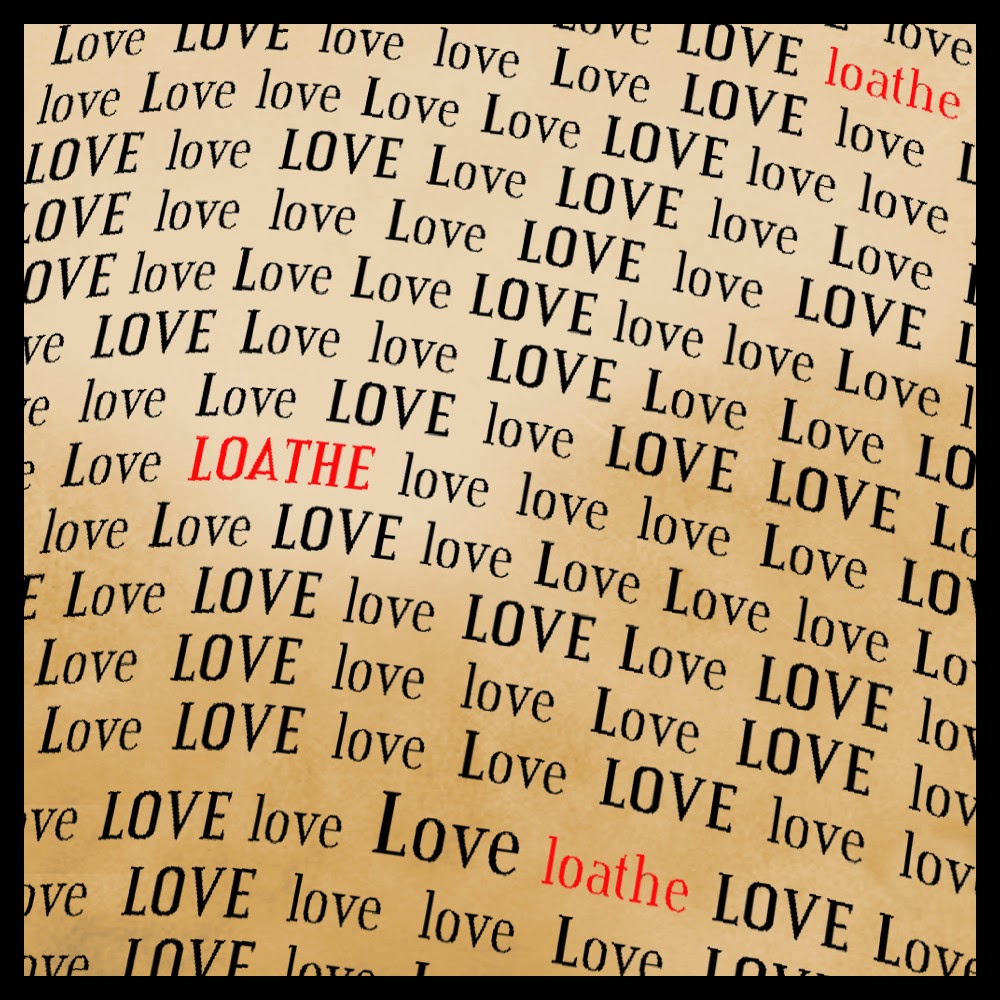 So let's say I've worked through that issue for a particular book. What other loathings am I likely to encounter?

I experienced this horror right at the very end of my most recent manuscript. I was writing along beautifully for a week or two only to hit a certain day--with just a handful of chapters left to go--a certain day when NOTHING WOULD HAPPEN. I seriously put on my timer (a last-ditch effort if Writer's Block is looming) and forced myself to write for forty minutes. But everything I wrote was awful.

But I couldn't find the words. They simply weren't there.

So I jam-wrote for forty minutes, produced a whole lot of blather that went nowhere, and walked away in a fit of despair and . . . you guessed it . . . loathing.

So yeah. It happens. It's Just Not There Right Now happens. And I absolutely despise it!

Do note--Even though I was having an It's Just Not There Right Now day, I didn't immediately get up and walk away. Because those days can and often will turn into Oh That's All It Needed days if you just keep plugging away. But there are days where nothing helps but a good weep, a little gnashing of teeth, a large cup of tea, and an angry nap. On those days, its best to leave the poor manuscript alone until the next morning.

So that's enough about loathing. What do I love about writing?

That moment when I can accept that this story will never be perfect. But it will be good.

That moment when I can safely say that this story is better than the last story. That even if readers disagree, I know it's true.

That moment when I've reached the end of a 4,000 word day and know exactly what I want to start writing tomorrow.

That moment when It's Just Not There Right Now melts away into AH! There It Is!

So how about you? When do you love/loathe your work? What are the best and worst moments of the writing life in your opinion?
Posted by Anne Elisabeth Stengl at 6:00 AM

I think what I loathe about writing is that I can be quite stupid about it sometimes. When I get an idea, I'm so excited that I jump into it right away, despite the fact I know nothing about the story yet. Then there's an awkward, scrabbling process as I work the story back to where it would've been if I had waited a few months.

That was an inspiring post. And I can't wait to see what on earth that window is about! I also can't wait until next week!
My writing life hasn't formed properly yet, I pretty much only get to the thinking up the story part, then I have an idea for something else and the previous story gets left behind, most of the time I look back and am relieved about leaving it behind.
Jemma

Yes! This! All of it! Especially the part about pouring your soul into the story. It's not so much I loathe it, but the fact of how much it takes out of me. I literally feel I'm pouring all of my heart and soul into the story. In fact, one time someone asked me when I know I'm finished with a story and I said when every ounce of my soul is gone and in the story, then I'm finished.

Thanks for sharing, Anne :)

I have days like that as well. I love my work when it flows. And when it doesn't, I have to step away. (Still stuck on a short story, but hitting the edits right now, so I'm hoping the story will flow once I'm done with editing). I loath the imbalance of emotions and mental state that affects my ability to function. It's not much in regard to my work in particular but outside influences hindering my progress. Other times, when I get done reading an amazing story, and I look at mine, and I'm like, I suck. Ha!

I loathe the way I'll jump into writing something only to go back, (or have someone point out), mistakes that are so glaringly obvious they are almost laughable. By mistakes, I'm not talking of grammatical errors, (although they are frustrating, too), but of plot holes. The story will seem perfectly fine when I read it, but upon reflection I'll realize that major polishing is needed. I'll end up barrating myself if I'm not careful, and then nothing constructive gets done. Also, I loathe second-guessing myself during the revision process. Over this year, I've grown to love revision work itself, but I often worry that I'll remove or add something that might ruin the story.

I love the thrill of immersing myself into a scene, of how words will just come together in ways I could never verbalize them. Being someone who is often tongue-tied, I find that writing dialogue is such fun for me. I also love becoming acquainted with new characters and how you can express good (and bad) feelings through those characters. During these times, writing seems like a mirror. Issues that have always bothered me or times I've wanted to rectify an error can be played out through characters.