D is for Dragon

Of course it is.

And not just any dragon, but the Death-in-Life or the Death of Dreams . . . which are only two of his many names. He is also called the Father of Dragons and the Dark King. But for most people he is known simply as the Dragon.


I really loved writing this character. Here is one reason why: 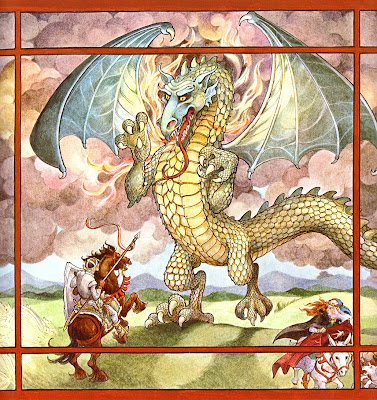 This image was from Trina Schart Hyman’s glorious picture book St. George and the Dragon, which was my favorite story around age 5. It had everything. An enigmatic hero, a beautiful, brave heroine, a sweet wooly lamb, a dwarf, and most of all, The Most Amazing Dragon since Maleficent (possibly more amazing, though I do love Maleficent).

Later on, when the story of Heartless first began stirring in my brain, it made perfect sense for me to go back to favorite images and storylines from childhood. The princess’s sweet wooly lamb became a blind cat, and a little brother was substituted for the dwarf. But Princess Una retained her role as the symbol of the Church (although a very different portrayal of the Church . . . more on that later). And the enigmatic hero, of course, we have already discussed.

But O! That Dragon!

I love a truly frightening dragon. I’m not saying there’s anything wrong with tame dragons, or friendly dragons, or wise and helpful dragons. I’ve read books I’ve enjoyed featuring each of these. But tell me, dear reader, what dragon compares to Tolkien’s Smaug? Or to classic Disney’s Maleficent? And, especially, to Ms. Hyman’s terrifying portrayal of Spenser’s Dragon of Error?

I loved studying Spenser’s Faerie Queen in my first college English class. It was wonderful to see that picture book I had loved fleshed out in its entirety. Something about the symbol created by the Dragon has always intrigued me. It’s a biblical symbol to be sure. And it’s a classic symbol throughout literature.

So when I began writing the Dragon in the very first short-story version of Heartless, I wasn’t surprised when his voice was the strongest. He was a completely and frighteningly natural character to write. While the other characters in the short story were very basically drawn, fulfilling their roles without embellishment, the Dragon had color. He had fire. His seductive and deadly voice spoke lines that breathed with life.

I definitely wanted to write him on a larger scale.

So I took to the novel with a will. In that first draft, I hastened through the opening passages of Una’s encounters with her suitors, scurrying as fast as I could to that moment when, down by the old bridge, she would come face-to-face with the ultimate evil. That scene still gives me shivers. The insidious poison the Dragon breathes into my heroine, whispering half-truths and outright lies and even (upon occasion) the truth, as it suits him.

I don’t know that any other character gave me so much satisfaction to write. Maybe Lionheart, but probably not.

I have had people ask me since the book’s release what I did to get myself into the proper frame of mind to write such terrifying scenes. I never quite know how to answer that. The scenes with the Dragon were frightening, yes. Some of them even frightened me while I wrote them (the scene where Una flees through the house, pursued by a predator she cannot see). But, because of the very nature of the Dragon, they were completely natural scenes.

Just as Una swiftly discovers, I believe it’s true that we all have dragons in our hearts. We are all totally depraved, and even the good we do is often done for selfish reasons. Thus the need for grace! And the need for complete transformation. But we know the depths to which our thoughts may sink. Our insecurities, our anxieties, our selfish desires . . .

And the Dragon takes those and makes what he wills of them.

So, yes. The Dragon of Error, or the Death-in-Life. A seriously creepy and fascinating character to write and (I hope!) to read.
Posted by Anne Elisabeth Stengl at 8:19 AM

Christa here. I knew as soon as I saw the picture that I'd seen the book before. I just remembered the pictures, not the story so I enjoyed going over it again.

I blogged on your post: http://www.bakerpublishinggroupuk.blogspot.com/
It's rather off topic, but my fav dragon is Saphira! She can be pretty terrifying when she feels like it! I've just re-read the bit in Heartless where the dragon appears on the bridge... Cleverly done & nicely creepy.

One of my teenage art students keeps encouraging me to pick up those novels! My only experience with Saphira was from the movie, which I am told does not do the stories justice. Might have to go finding me a copy of Eragon . . . Enjoyed reading your blog on my post! Dragons are the best! :)

Thanks for the paragraph that begins "Just as Una . . ."